Nowadays, there are a million ways to do your shopping (well, not quite, but we’re getting there). Whether you’re ordering online, heading to a third-party retailer, or even stopping by a local garage sale, you’re sure to find what you’re looking for one way or another. One avenue that’s been increasing in popularity is DTC (direct-to-consumer) shopping. We’ve surveyed just over 1,000 people to understand more about why some currently go the DTC route and why others are thinking of making the switch to it.

We’ll also take a closer look at some variables that help paint the picture of consumer shopping tendencies. For example, how much money do people spend monthly, and how often do they shop at large retailers versus buying directly from brands? Has the COVID-19 pandemic led to an increase in DTC shopping? Read on to learn more!

In our research, we found that 8 out of 10 respondents reported making at least one or more purchases directly from a brand or company rather than from a large retailer in the past year. Of them, 30- to 44-year-olds were most likely to opt for the DTC avenue. Also, consumers purchased directly from midsized companies slightly more often than large retailers and much more than small brands or companies.

Overall, the most common reason why someone would buy directly from a company was that it was simply the cheaper option; customers don’t need to make up for the additional transportation and handling costs that are tacked on to items being sold in large retail outlets. Over a third of respondents also claimed that this shopping method was more convenient and gave them access to an increased selection of products. When comparing genders, the biggest noticeable difference was that women were much more interested in buying directly from a particular brand to support that brand's business than men were.

Furthermore, even though Amazon has 147 million Prime members, over half of respondents still felt as if their experiences buying goods directly from companies were better than their experience with the multinational e-commerce company. When going DTC, they were especially pleased with the quality of products, but also had few complaints about the availability of them. Customer service and shipping and handling processes were also generally up to scratch in the minds of respondents.

How Much and How Often?

Consumers who purchased directly from brands typically spent under $100, and just over a third spent between $100 and $300 when purchasing directly from brands. Comparatively, expensive purchases were more commonly made through large retailers. Consumers also made purchases from large retailers more frequently, at a few times a month or more. In either purchasing avenue, women were more active with their buying habits.

For DTC purchases, the most frequently bought goods were clothing, a full 14 percentage points higher than the next category – footwear. Seeing as clothing and clothing accessory store sales amounted to over $266 billion in the U.S. in 2019, and the U.S. apparel and footwear market size was $367.93 billion in the same year, it’s safe to assume that a large portion of the sales were of DTC nature. Also, men purchased technology products a lot more frequently than women did, while the opposite was true for beauty products.

We’ve dissected respondents’ purchasing tendencies a little further: people aged 60 and over were most likely to spend under a hundred dollars, monthly, on DTC purchases. As the monthly expenditure intervals increased, less money was spent across the board in general. Also, there wasn’t much difference regarding frequency of purchases between men and women – almost none of them made DTC purchases on a weekly or daily basis.

Overall, 46% of respondents said they wanted to increase their DTC spending over the next year, females more so than men, and people aged between 30 and 44 slightly edged out other age groups with their plan to boost expenditures.

Before they start shelling out more money, though, how did consumers connect with their favorite brands in the first place? According to respondents, 44% discovered them via word-of-mouth (WOM). This kind of marketing is great for companies because, thanks to social media, your opinion can reach millions in seconds. Every positive comment made online about your business has the chance to reach an enormous audience, potentially leading to more sales or, at the very least, heightened interest. Both men and women discovered brands the most via WOM, but women were more likely to take suggestions from their social media feeds as well.

Also, many respondents liked to support small businesses, as 56% cited this as their motivation for going the DTC route. Otherwise, 45% were interested in savings and would opt for DTC when they had a coupon for a given store. Nearly 40% also thought it was worth it if they weren’t in a rush to acquire their desired item.

During the COVID-19 pandemic, just over a third of respondents said they’d begun to engage in DTC shopping. Women got on board with it slightly more than men, and younger people (aged 18 to 44) were much more likely to shop directly from their favorite brands than their older counterparts (those 45 and above). 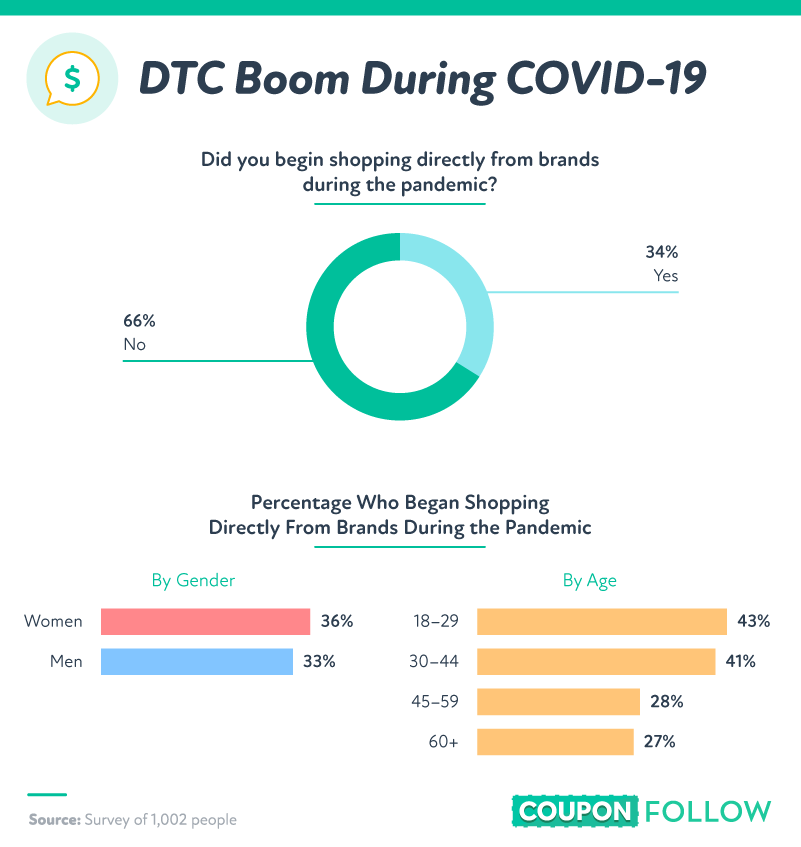 Generational shopping differences may help further explain people’s relationship with DTC shopping. For example, baby boomers wanted convenience above all else, meaning they have less preference of where they buy their products, as long as it can be done efficiently. Otherwise, younger generations said that word-of-mouth marketing is a key influencer in their purchasing decisions, increasing the likelihood of shopping directly from a brand if someone were to suggest it.

On the other hand, there certainly are benefits to buying from large retailers: over half of respondents claimed that it’s the cheaper option, and 50% liked to buy a multitude of different products in one location, making large retailers the logical choice. Nearly half also liked having the option of comparing multiple brands before settling on one. That being said, 20% said that in the near future, they would like to make the transition from shopping at large retailers to purchasing directly from a brand or company. 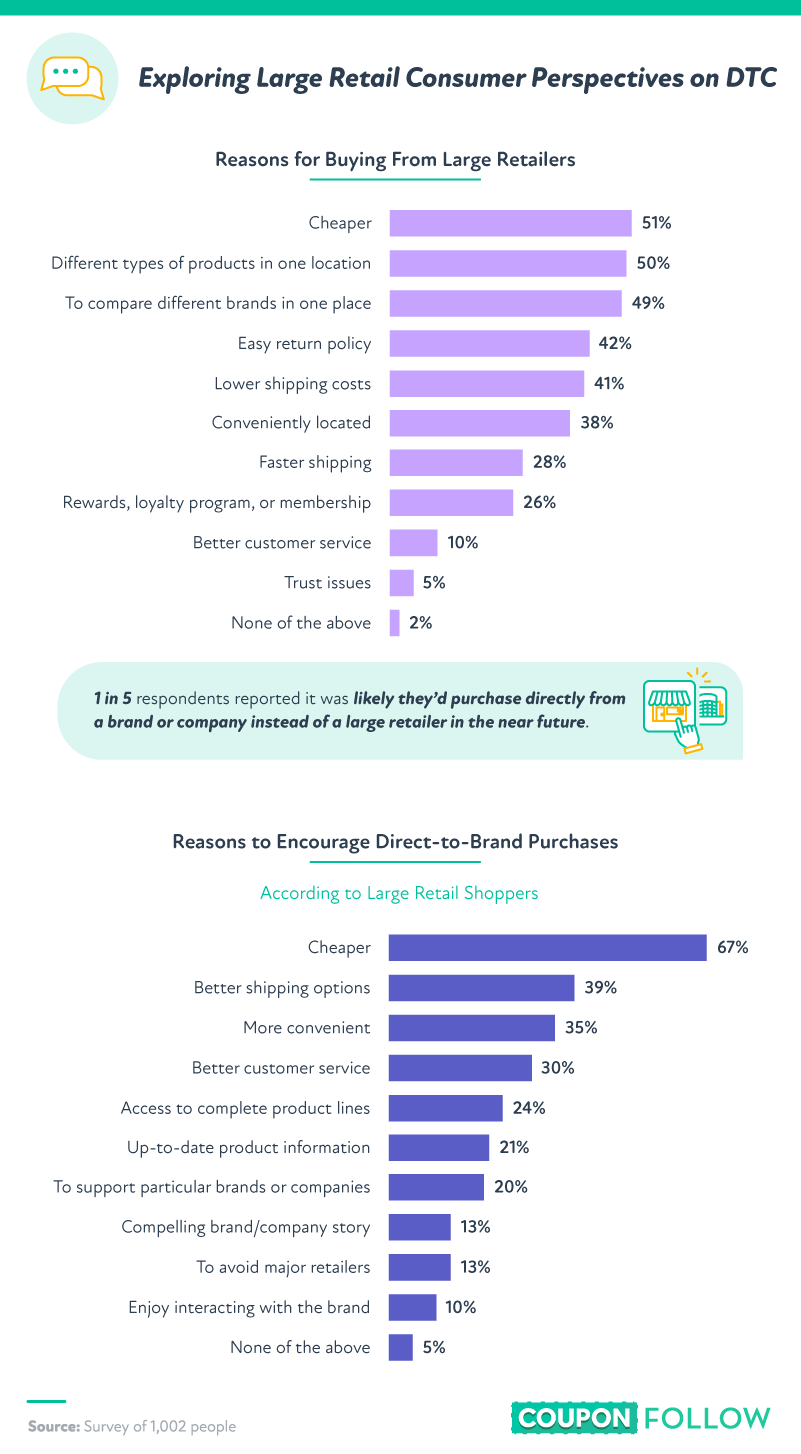 As the data indicates, cheaper options were most enticing, and consumers clearly valued price over loyalty. The data points to the fact that consumers will often purchase from the business with the lowest price, whether that is direct from their favorite brand, or from a large retailer. We know that DTC can often be more cost-effective for consumers, however, retail stores offer unmatched sales potential by consolidating different types and styles of merchandise in a single location.

It’s All About the Brand

It’s no surprise that price is an enormous factor when consumers are considering their purchase decisions, and going the DTC route is a cost-effective one. Because people don’t need to cover the additional costs that get added on to products sold in larger retailers, many opt to buy directly from their favorite brands. Also, people like to support their favorite brands, and word-of-mouth marketing plays a key role in increasing the frequency of DTC shopping because consumers tend to trust people’s personal experiences when dealing with a given company.

As previously mentioned, there are countless ways to get your shopping done; it just so happens that direct-to-consumer has recently picked up speed. With online shopping on the rise as well, people will be refreshing their favorite company websites to see what might catch their eye. CouponFollow takes the online shopping experience to the next level. They track coupon codes from online merchants and offer them to you all in one place. Download their app now to save big on your favorite brands!

For short, open-ended questions, outliers were removed. To help ensure that all respondents took our survey seriously, they were required to identify and correctly answer an attention-check question.

These data rely on self-reporting by the respondents and are only exploratory. Issues with self-reported responses include but aren’t limited to exaggeration, selective memory, telescoping, attribution, and bias. All values are based on estimation.

Feel free to share this consumer-focused article directly with your friends, family, or anyone else you think might be interested in learning more about our findings. We just ask that you do so for noncommercial use only and to provide a link back to the original page so contributors can earn credit for their work.