23 Credit Card Usage Statistics You Should Know in 2022

The first credit card, called the Diners Club Card, was launched in 1950 and was made of cardboard. Things have changed a lot since then.

Most Americans have multiple credit cards and use them every week. And most have thousands of dollars of credit card debt (Source: Experian).

This article presents the most recent facts about credit cards, including how common they are, who uses them, and what typical usage looks like in 2022.

We’ll break these down more throughout the article, but let’s start by looking at some of the top credit card usage stats for 2022:

Credit cards are incredibly popular in the United States. There are more open credit cards than ever in history.

And why not? They’re convenient, allow you to spend beyond the balance of your bank account, sometimes give you rewards, and can improve your credit score.

But as we’ll see, the American reliance on credit cards also results in high levels of debt for many people.

1. There are 520 million open credit card accounts in the United States

During the financial crisis that began in 2008, the number of open US credit card accounts dropped dramatically.

But within five years, that number was growing again, and the number of credit cards has now reached an all-time high.

Although new credit card issuance declined in the early days of the pandemic, it’s now back to the pre-pandemic norm (Source: Liberty Street Economics). 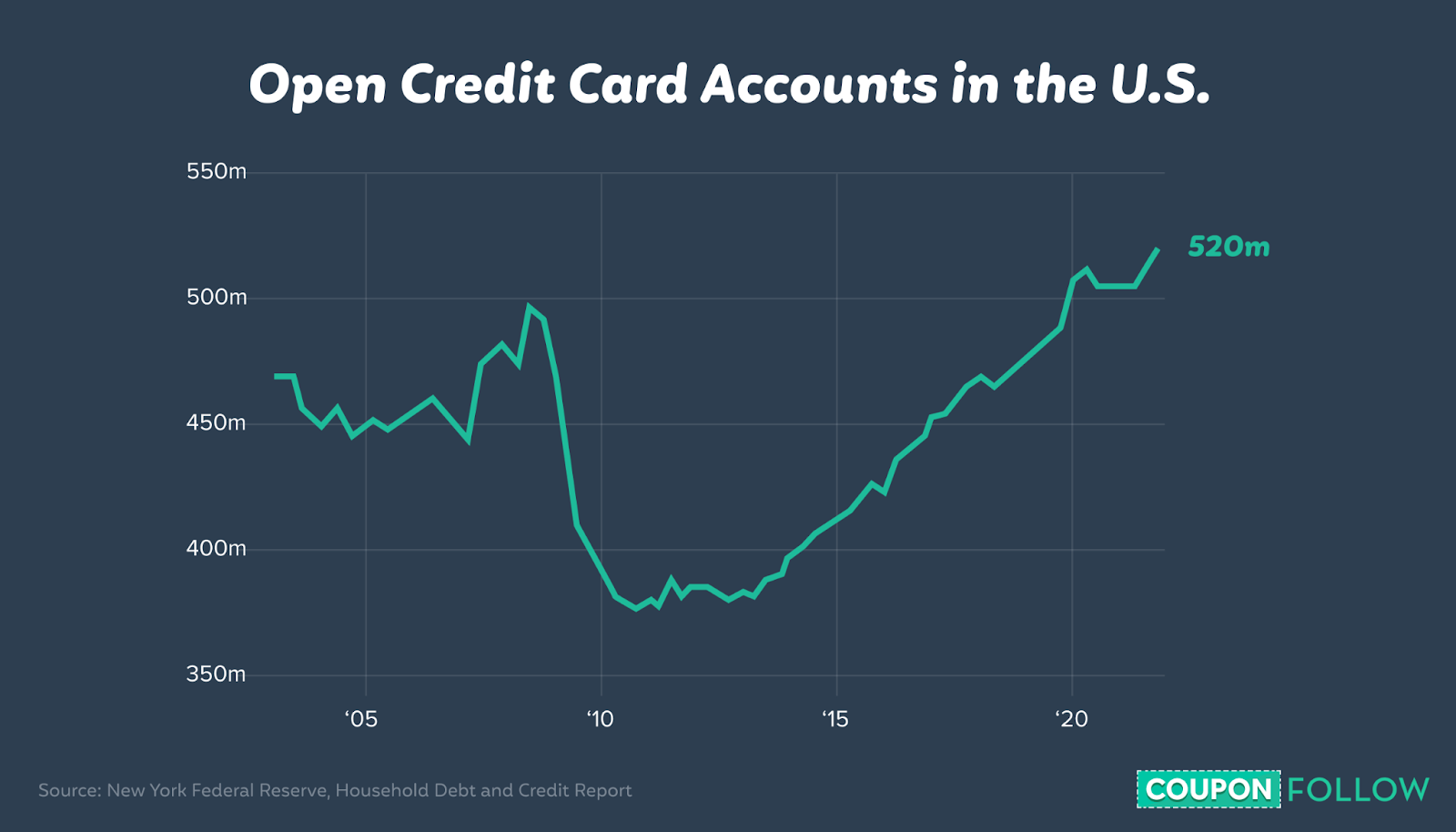 2. 79% of American consumers have a credit card

The majority of Americans have at least one credit card.

As with the total number of credit card accounts in the US, the percentage of people owning credit cards dropped off after 2008 but has now risen to an all-time high.

3. The average consumer has 3 credit cards

Most Americans don’t stop at just one credit card. The average person has three. That number has held steady for the past few years, but it’s down slightly from 2008 when it was 3.4 (Source: Experian).

Boomers have 3.4 credit cards on average, making them the generation with the highest level of credit card ownership. Members of Gen X own 3.3 cards, while millennials and the silent generation own 2.7.

Gen Z lags behind with 1.7 credit cards each — not surprising, given their age.

There are also geographical differences. Residents of New Jersey have the most credit cards, averaging 3.37 per person. People in Mississippi have the fewest at 2.62 (Source: Experian).

4. Cashback credit cards are the most popular type

The most popular type of credit card in America is the cashback credit card, which lets the user earn money for making purchases with the card.

46% of American cardholders have a cashback card. That’s a lot, but it’s down from nearly 60% in 2019. Travel rewards credit cards have gained popularity, even while travel was restricted during the pandemic.

5. The most popular credit card feature is a low-interest rate

When asked which features they looked for in a credit card, 25.51% said they prefer a card with a low-interest rate.

“Low-interest rates” tops the list of best credit card features due to its popularity with all generations. However, if we break it down by age, we see a different picture.

Millennials and Gen X prioritize good credit card rewards programs over other features, including low-interest rates. Boomers and Gen Z place the most value on having no annual fees.

Other popular features include a high credit limit and a welcome bonus.

Now that we’ve covered the prevalence of credit cards, let’s talk about how they’re used.

Does the average consumer pay off their balance each month, or do they have a mountain of credit card debt?

Here’s what the data says.

7. 38.5% of credit card users carry their balance over to the next month

Credit card users can be classified into a few different groups.

First, there are the people who don’t use their credit cards at all. These users are called dormants, and they make up 24.9% of credit card owners.

Finally, 38.5% of credit card users are revolvers, meaning they carry a credit card balance over from month to month. 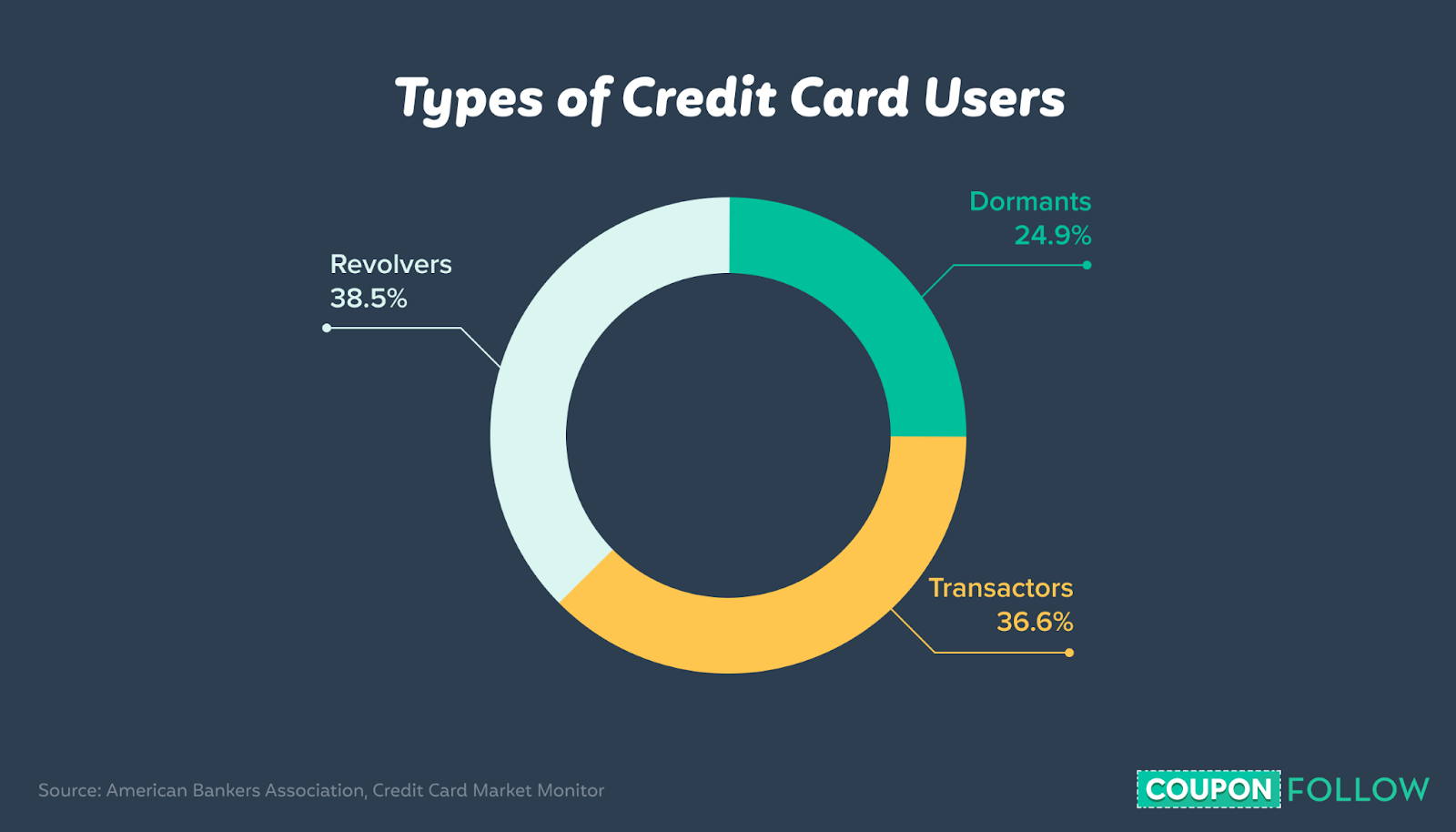 8. The average credit card user’s debt is 4.42% of their disposable income

Spending or overspending a credit card limit is common in the US. Over half of American credit card owners have done it.

That’s pretty high, considering that maxing out a credit card can hurt your credit rating and cost you a lot in interest.

Gen X is the most likely to max out a credit card. 66.24% of that generation have done it at least once. In second place are millennials at 51.48%.

10. 45% of credit card users have used a balance transfer to consolidate debt

A balance transfer is a type of credit card transaction in which you move debt from one account to another. It’s typically done to move a credit card balance to an account with better perks, like lower interest charges or a more attractive rewards rate.

When it comes to different age groups, Gen X is the clear balance transfer leader at 57.90%. Boomers, millennials, and Gen Z all fall somewhere between 38 and 40%.

11. Gen X has the most credit card debt

You may have noticed a theme in the last couple of statistics. Gen X has maxed out the most credit cards and completed the most balance transfers.

That’s because they have the most credit card debt overall.

While many Americans have credit card debt, most pay their bill every month.

Gen X is the generation most likely to have an account overdue. 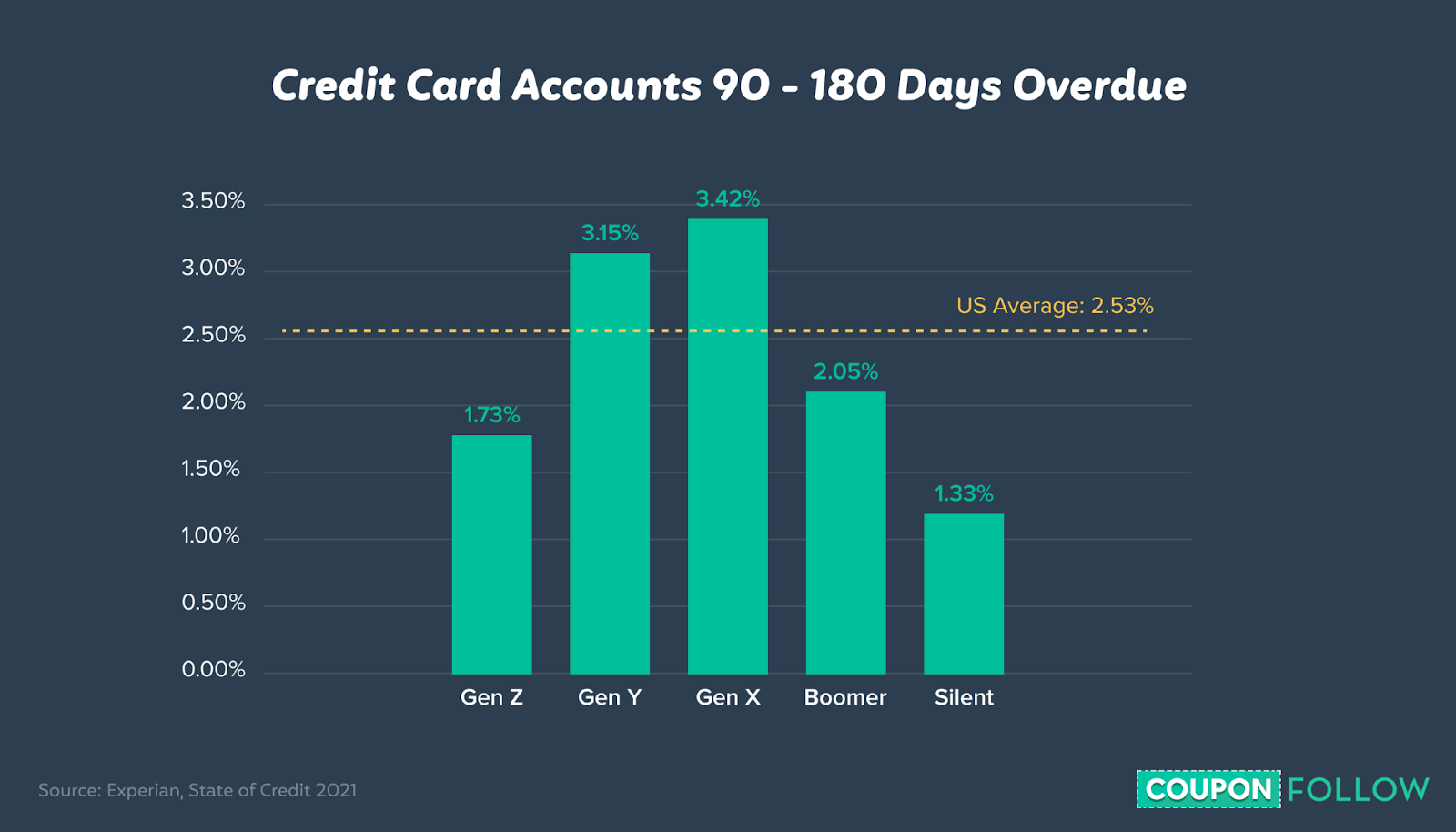 All of that credit card debt comes from somewhere. The following statistics relate to credit card spending habits.

Out of the 68 monthly purchases the typical consumer makes, 18 are made with a credit card. That still makes credit cards less popular than debit cards, which are used in 23 transactions. Cash is used for 14 payments.

The average person has five to seven payment methods available to them.

Given this kind of choice, 42% of consumers prefer to use a debit card. Credit cards, preferred by 29% of shoppers, come in second.

Only 23% prefer cash. However, people don’t use their favorite payment method every time they buy something. Consumers who prefer cards still use cash for around 20% of their transactions.

Credit cards are popular with all generations, but there are some differences.

The two groups that use credit cards the most are 25-34 year olds and people over 65. The younger group prefers cards to cash, using debit cards 40% of the time, credit cards 26% of the time, and cash for only 18% of transactions.

Consumers over 65 also use credit cards 26% of the time. But they like cash, using it for 33% of transactions, and don’t care for debit cards, which they use 19% of the time. 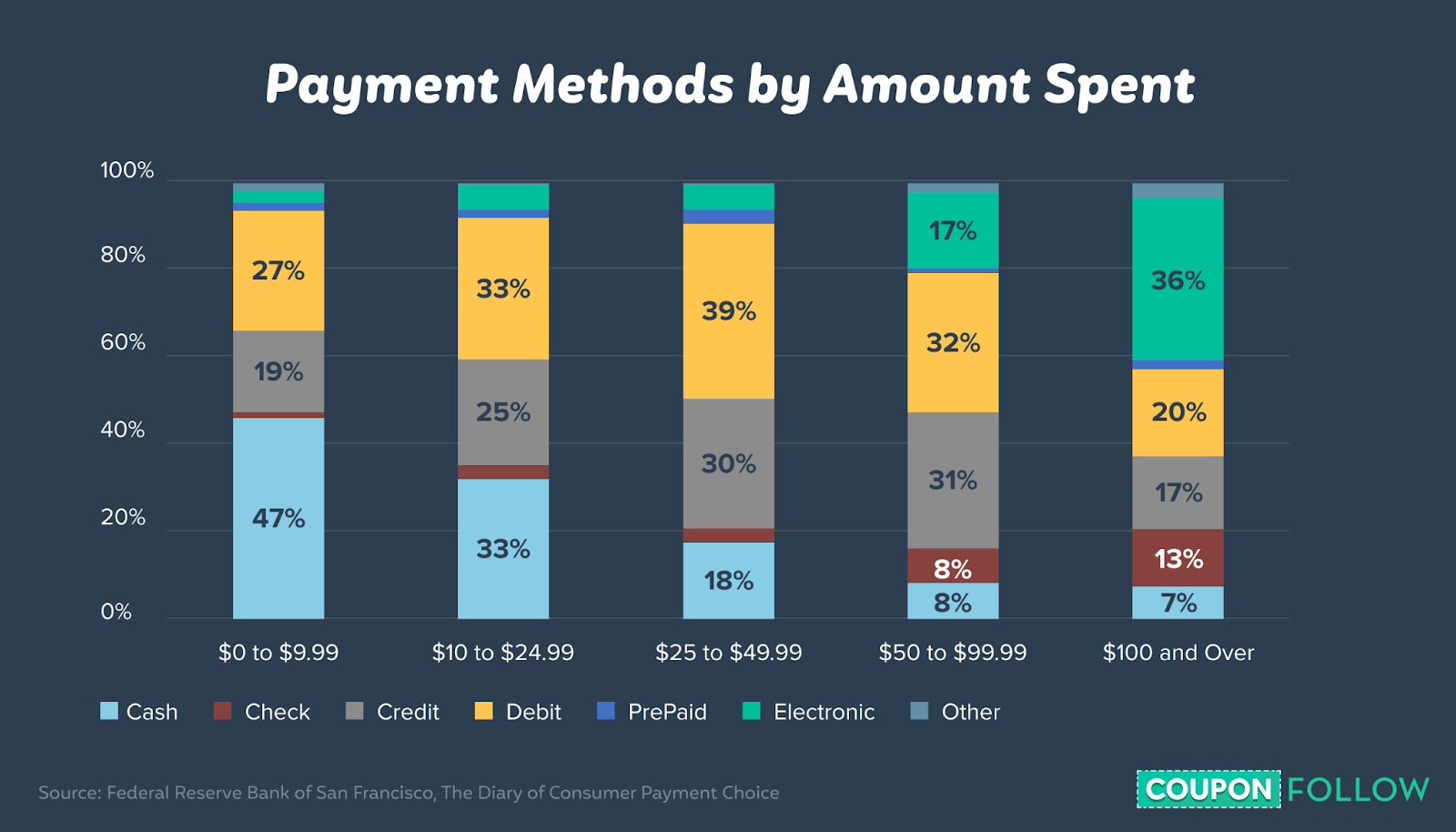 As the purchase gets more expensive, cash becomes less popular, and credit cards are used more often. For payments of $50-$99.99, only 8% use cash, and 31% use credit cards.

17. 55% of consumers have made online payments with a credit card in the last year

When asked, “How have you conducted payments online in the past 12 months?” 55% of consumers responded that they’d used a credit card.

Credit cards are popular online, but what about in the store?

Point-of-sale system data tells us that using a credit card is a little less popular in person than it is online, probably because people like to use cash in the store.

We’ve seen that there are hundreds of millions of open credit cards in the US. But where do they come from?

This section looks at the financial institutions and credit card payment networks that dominate the credit landscape.

19. Citibank is the largest credit card issuer in the US

Out of the credit card lenders in the United States, Citibank is the largest, with 95 million active accounts. Chase is next with 83 million accounts, followed by Capital One with 62 million.

Financial institutions like Citi and Chase may offer branded credit cards, or they may offer cards from networks like Visa and MasterCard.

20. There are 353 million Visa cards in the United States

Between Black Friday, Christmas shopping, and after-Christmas sales, the holiday season is the most popular time for shopping in the US. So what does that mean for credit card users (and their levels of debt)?

These next few statistics tell the story.

When holiday shopping wraps up, consumers have almost an entire year to pay off their Christmas shopping.

But some never do.

When Black Friday 2021 rolled around, 29% of shoppers who bought gifts with a credit card the previous year were still carrying some of that balance. 34% of millennials have this lingering debt.

That said, most people paid their 2020 balance quickly. 54% of holiday shoppers incurred debt, but they paid it off in an average of 2.2 months.

28% paid their debt with the first credit card statement.

In 2021, credit cards were the payment method of choice for Black Friday online shopping. 53.8% of shoppers used them for eCommerce, compared to 40.5% who preferred debit cards.

23. 37% of people plan to pay off this year’s holiday shopping with the first statement

Most people don’t intend to keep their holiday shopping balance all year.

37% of 2021 holiday shoppers planned to pay off their balance with the first credit card statement they received. 41% expected to pay it in the next several months, but 22% were planning on keeping a balance for 5-24 months. 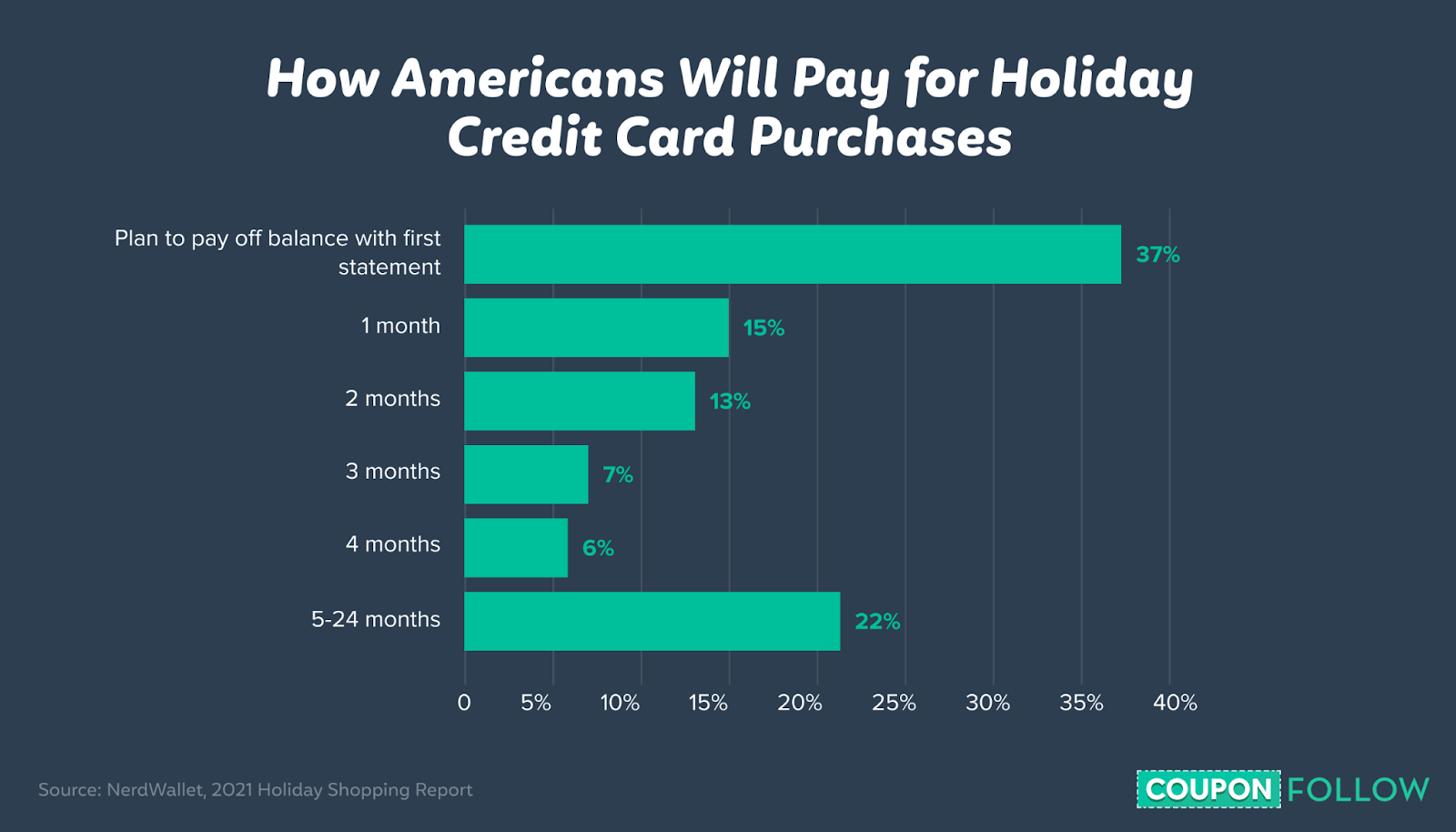 On average, they expect to take three months to pay off the holiday debt. This will cost them around $18 in interest.

Credit cards are a huge part of life for most Americans. They juggle multiple cards, spend time looking for the perfect rewards points program, and accrue thousands of dollars of debt.

Credit card ownership, usage, and debt have been rising for years and will probably continue to do so.

But credit cards aren’t the only cashless payment method out there. Shoppers are also paying with mobile phone apps, digital wallets, prepaid cards, Bitcoin, and more. These methods became more popular during the pandemic due to 49% of shoppers feeling worried about using cash because of the risk of virus transmission.

Read more about the state of cashless payments in our report.