Have you ever felt compelled to collect something? Some scientists assert that being a collector can be a sign of obsessive tendencies, while others insist it brings joy and connection. Possible futures of both financial gain and collapse can be involved, and entire businesses can be built on markets of collector communities. To get to the bottom of this, we collected a little something of our own: data.

After speaking to 1,000 Americans about their collections today, we have developed a deep understanding of what collecting looks like in the modern era. From NFTs to jewelry and the resurgence of secondhand markets, the “collective” tendencies of the U.S. are driving some pretty historical trends. If you’re curious to know more, keep reading.

Our study begins with the simple questions: Are you a collector, how serious are you, and what types of items do you collect? The thousand responses we received are broken down in the graphics below, as are the top reasons for collecting by generation. 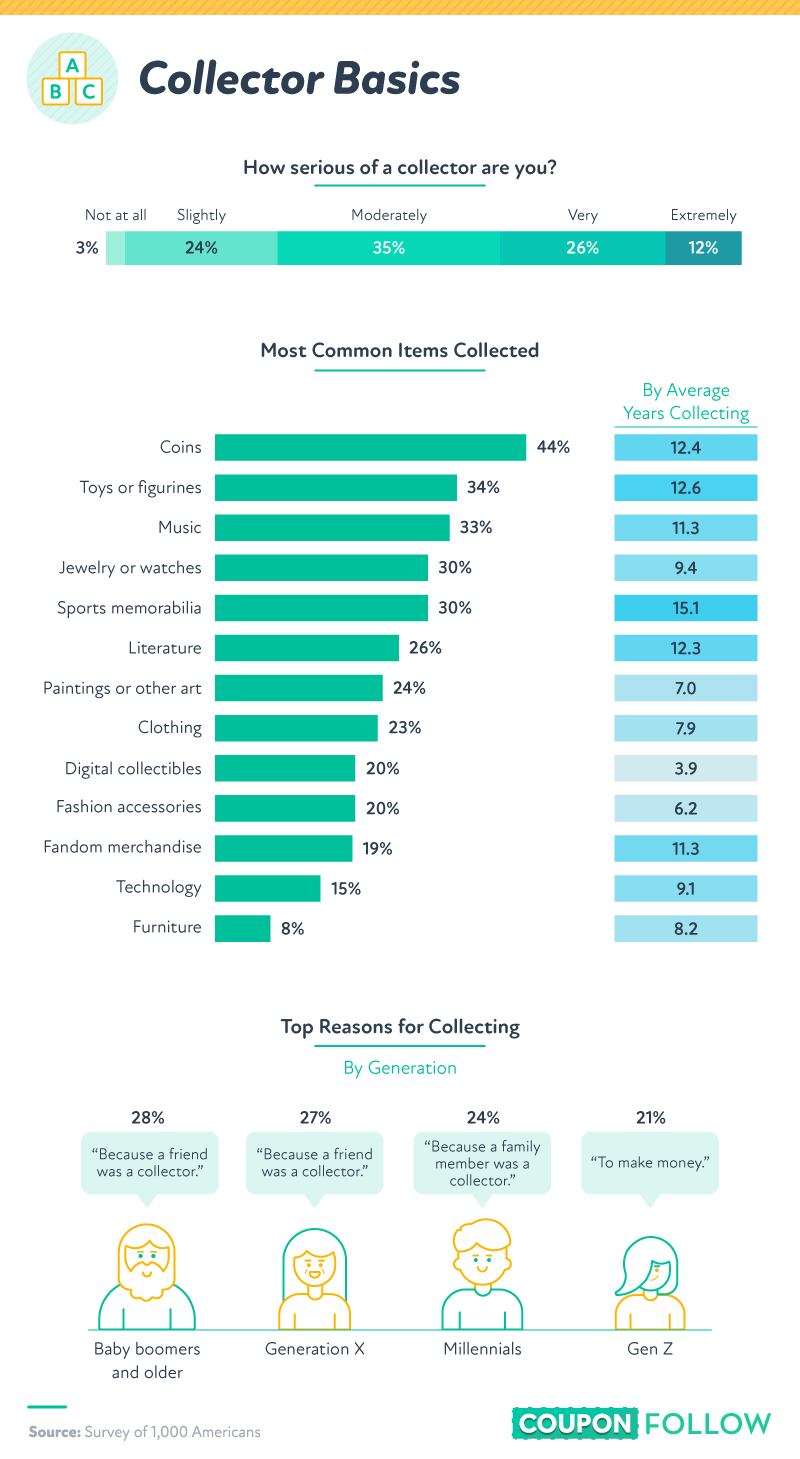 The majority of Americans—56%—actually considered themselves collectors of some kind. Moreover, most considered themselves to be at least moderately serious about the hobby as well. Most often, these self-identified collectors held onto coins (44%), toys/figurines (34%), or even music (33%). Jewelry and sports memorabilia were also fairly common. Considering how new of an option it is, digital collectibles (like NFTs) were very popular among collectors—digital collectibles are even more common to collect today than fandom merchandise or fashion accessories.

So why were respondents choosing to collect and hold certain items? For everyone millennial-aged and older, it was typically a friend or family member that inspired them. But for Gen Z, the primary goal of collecting was to make money. Gen Z’s value set has been markedly different when it comes to their spending habits, with the generation already comprising a whopping 40% of the consumer market on their own. This study reveals their major tendency to think and operate financially, even around hobbies like collecting.

And while garage and estate sales are proving to be an older person’s game, Gen Z is also reclaiming this concept of shopping secondhand in a rather strong resurgence of the thrift market. Especially for finding new items for their collections, baby boomers and Gen Z alike are highly inclined to visit thrift stores. Millennial and Gen X respondents, however, were more likely to rely on eBay to find their treasures. 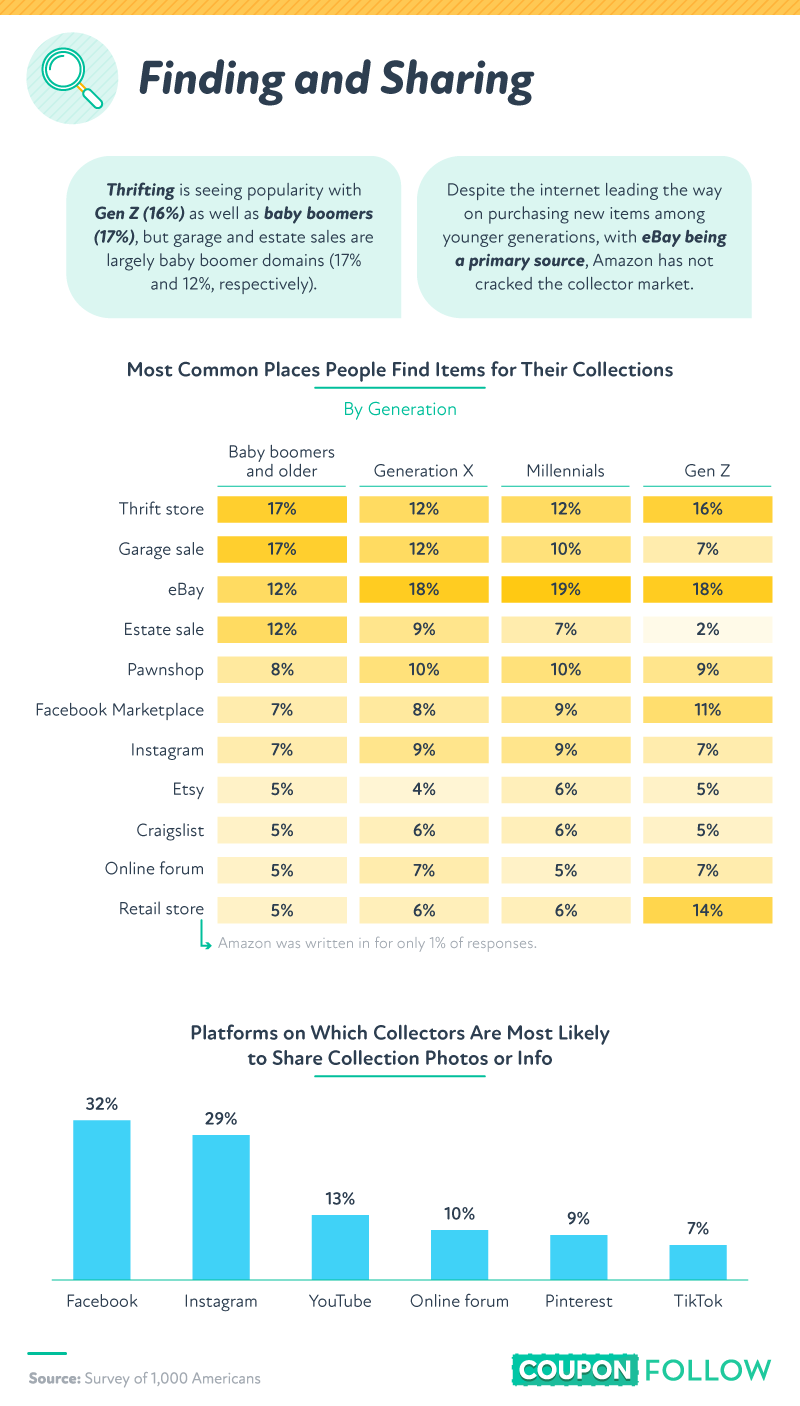 Once they had their prized possessions, most collectors turned to Facebook (32%) or Instagram (29%) if they wanted to share their pieces. That said, this type of collecting and sharing often correlated with poor levels of satisfaction. The least satisfied collectors, however, were those that chose to share their keepsakes via online forums like reddit. Perhaps these industry insiders were harsher critics or even revealed a lack of authenticity in the person’s purchase.

The Financial Side of Collecting

While Freudian psychologists infer that collecting helps people impose order on an otherwise chaotic world, our findings also revealed a simpler motivation: money. This next part of our study looks at collecting as an investment and asks respondents how much they spend on their collectibles and the types of returns they’re anticipating.

Technology wasn’t commonly collected and for good reason: Those who did collect tech confessed to spending an average of $12,241 on their collection, compared to NFT collectors who had only invested $1,162. Even fine jewelry collectors had only invested $5,370. Coins, which were previously revealed as the most commonly collected items, had cost its collectors an average of $5,263 to date. When asked about a valuable item in their collection, many collectors responded with an item that had sentimental value in addition to monetary value, such as an original artwork from a favorite artist, something purchased as a souvenir from a memorable trip, or an action figure from a beloved story.

Most collectors invested time in the hobby relatively frequently, with 78% reporting obtaining new items at least once per month. An additional 20% added new items to their collections every week and 6% did so every single day.

When we asked collectors if they eventually planned to sell their collections, everyone from furniture and coin collectors to NFT holders typically said yes. It was usually just those that bought fandom merchandise or toys and figurines that wanted to hold onto them forever. Most likely to sell were furniture collectors (71%) and digital collectors (69%). These two types were also the most likely to be driven by financial incentives when collecting.

Of course, there were benefits to collecting beyond the financial. Some never even wanted to sell in the first place, while even those that did reported important psychological benefits to the process. This next piece of our study looks at the senses of accomplishment, satisfaction, and overall happiness respondents found in the process of collecting.

When we asked collectors to rate their sense of accomplishment and their sense of life satisfaction, both average scores were higher than those for other hobbyists. Considering the dire state of mental health in the U.S., it’s encouraging to see that such an accessible hobby is aiding the happiness of so many. 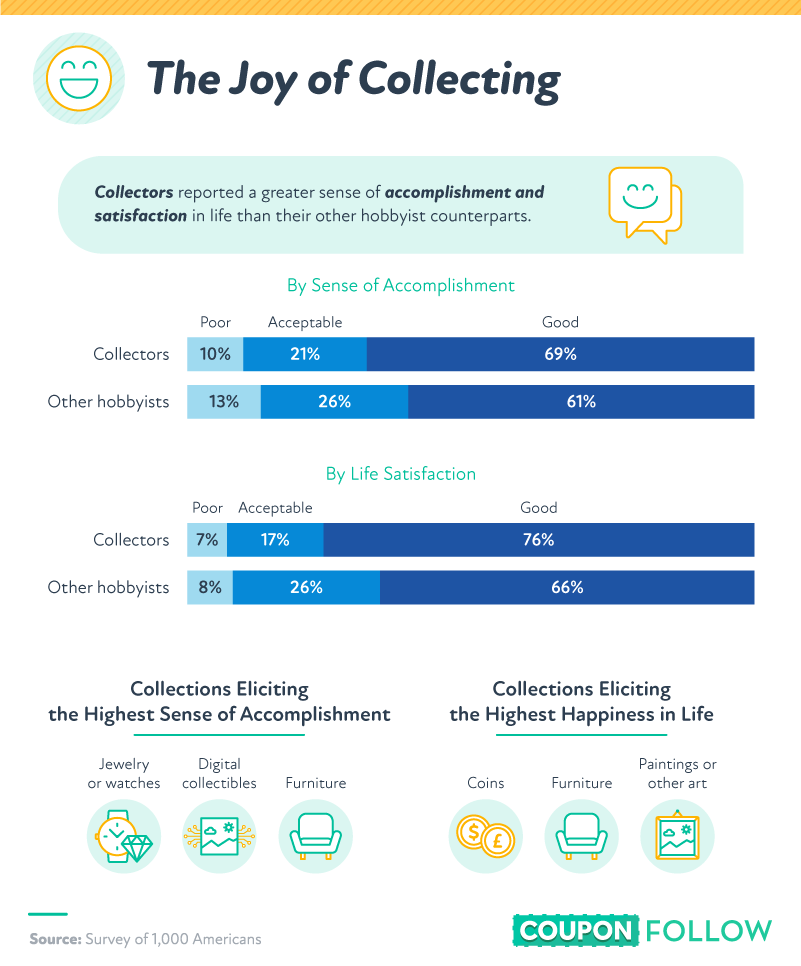 Of all types of collectors, those who focused on jewelry, digital items, and furniture reported the greatest senses of accomplishment, while those who collected coins, furniture, and art, such as paintings, reported the greatest sense of happiness. If you’re looking for a little extra “happy,” coins and art could be a good place to start. While art can certainly get expensive, the psychological benefits of it (which include everything from extra self-esteem to boosted dopamine) have long been documented.

To Run in the Collector Circle

So what does the community of collectors actually feel like to the average collector? Does it feel like-minded or valuable? Is it something collectors rely on or talk with frequently? Our study concludes with a look into the collector community values. 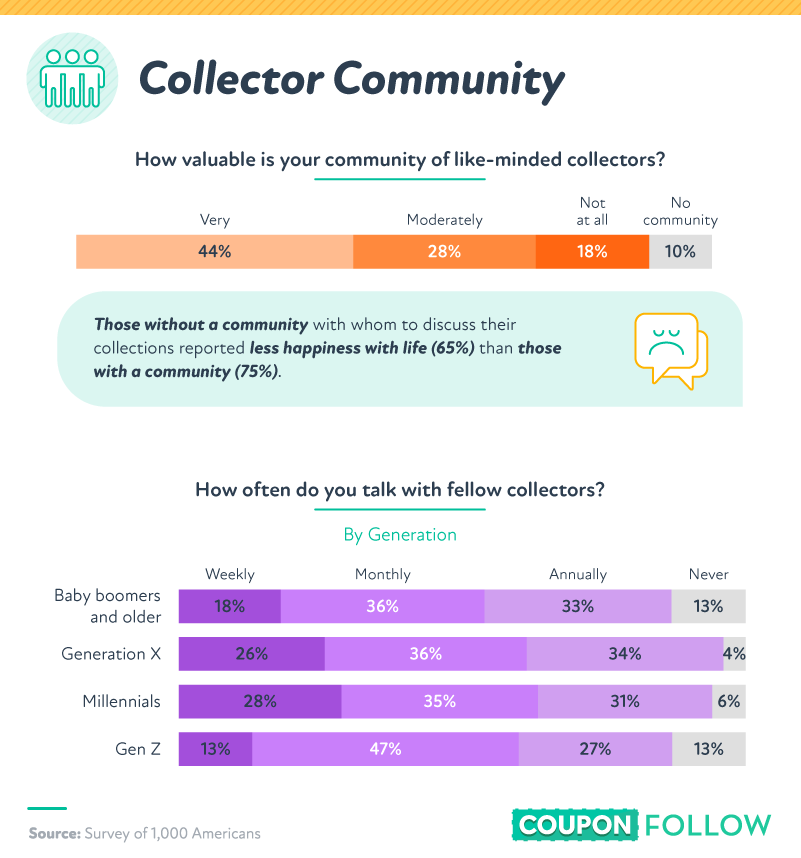 Collector communities were most tightly knit among millennials, who reported talking with their community more often than any other generation we spoke to. Considering the impact of the community on happiness, it’s likely that millennials are also enjoying increased senses of community and enjoyment if they’re engaging with theirs the most often.

Evidence revealed an incredible amount of benefits to the life of a collector. Not only are collectors potentially earning a financial reward, but they’re also enjoying higher levels of life satisfaction and community connection than those who abstain from collecting. Younger generations are also witnessing a resurgence of opportunities to get involved in collecting with the rise of thrift stores and online communities.

If you are looking to start collecting or add to one you’ve already built, don’t spend more than you have to. CouponFollow can help you find the best prices and crucial discounts on everything from furniture to coins and clothes. In fact, you never even have to search for the coupon with CouponFollow’s handy extension, which automatically adds discounts as you shop online. To get your collection growing in the most affordable way possible or just shop smarter in general, head to CouponFollow.com today.

We collected 1,000 responses of employed Americans from Amazon Mechanical Turk. Approximately 56% of our participants identified as men, 44% identified as women, and less than 1% identified as nonbinary or nonconforming. Participants ranged in age from 19 to 78 with a mean of 39 and a standard deviation of 11.4. Those who reported no current employment or who failed an attention-check question were disqualified.

Collecting data can be fun too! If this data speaks to you or you think it might be helpful for a potential collector, feel free to share the information. Just be sure your purposes are noncommercial and that you link back to this page.