The Cost of On-Demand Food Delivery

Life is getting more expensive, with inflation rates higher than they have been in three decades and rent prices soaring. Today, though, we’re here to talk about one of the most expensive daily habits in America—food delivery. Takeouts have been popular in the U.S. for decades, but in the wake of the COVID-19 pandemic, they have become a standard part of our lifestyle.

We decided to conduct a survey to find out more about the cost of food delivery in the U.S. After speaking to more than 1,100 Americans, we were able to determine how much each person spends annually on food, how high their tolerance is for delivery fees, and how the pandemic has influenced their food delivery habits. To see how your own behaviors, regrets, and resolutions around food delivery compare, keep reading.

The True Cost of Delivered Food

Whether it’s prepared in a restaurant or itemized by a grocery store, food delivery does not come free, or even cheap. The research below sets the tone for our study by showing just how much the average percentage markup is on food for some of the most popular grocery and restaurant delivery services. 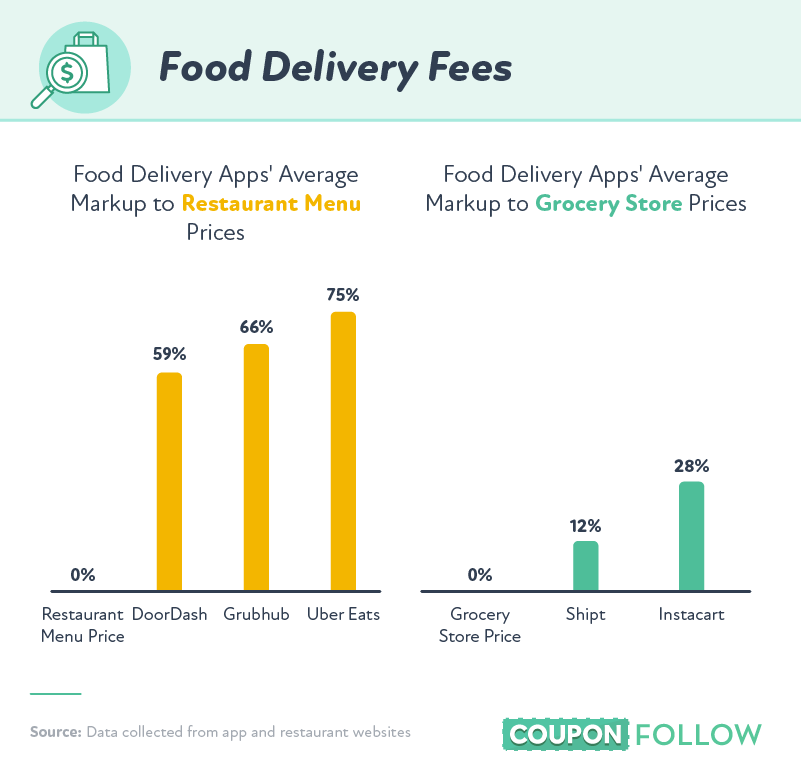 Having restaurant food delivered by one of the most popular delivery apps—Uber Eats—is extremely expensive, with the app putting an average markup of 75% on restaurant menu prices. Even less expensive options such as Grubhub and DoorDash still mark restaurant prices up by 66% and 59%, respectively.

Many people try to save money by having ingredients delivered and preparing the actual dishes themselves, using grocery delivery services such as Instacart and Shipt. Though they are much less expensive than Uber Eats, the cost is still significant. Instacart marks grocery store prices up by 28%, on average, while Shipt’s markup is 12%.

In spite of massive markups and a tumultuous economy operating in the background, people still allocate big budgets to food delivery. The asset below shows the percentage of people who order every week or more and the amount they’re spending on delivery services annually. 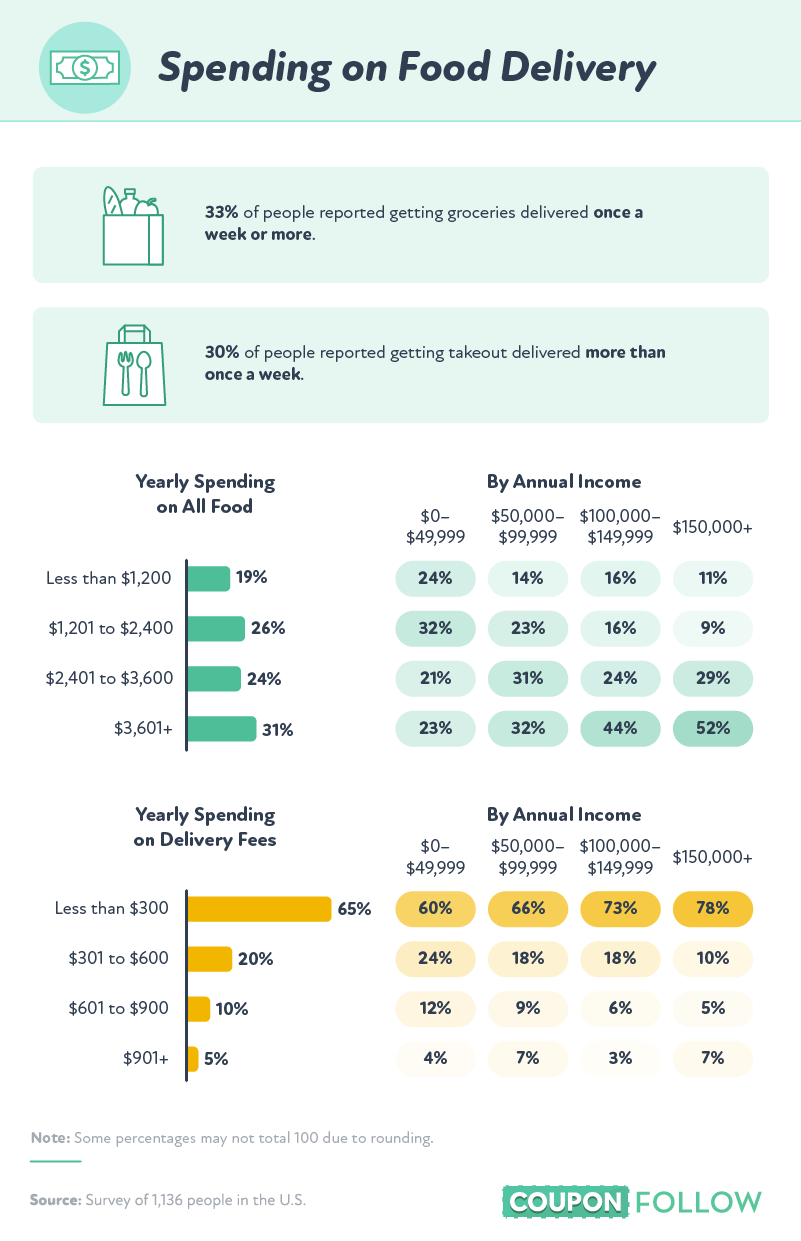 Nearly a third of Americans are having takeout delivered more than once a week. This means that they’re budgeting regularly for a 12% to 75% markup on the price of their food, as food delivery costs add up. Currently, nearly a third of Americans spend more than $3,600 annually on food in total. This represents 7.6% of the average American salary of $47,520. The more a person made, the more they spent on food in total; more than half of those earning $150,000 or more annually spent upward of $3,600 a year, although relatively few reported spending much on delivery fees.

With Americans claiming to dish out so extensively for food delivery but so minimally for delivery fees, we were curious as to what was going on. The next section of our study asked respondents about their behavior regarding fees as well as which fees they considered most annoying.

Respondents placed fair fees over brand loyalty when it came to their chosen delivery apps. DoorDash (45%), Grubhub (31%), and Uber Eats (26%) were the most popular takeout apps; however, more than half of each platform’s users would switch apps if fees increased. Walmart Grocery (19%), Amazon Fresh (19%), and Instacart (18%) were the most popular grocery delivery apps; similarly, though, between 49% and 61% of users wouldn’t hesitate to switch if fees increased.

Furthermore, when asked about their financial threshold toward fees, respondents reported that, on average, they would leave delivery apps altogether if fees hit a total of $9 per purchase. This number varied by those who attributed their delivery app usage to COVID-19 precautions ($13 threshold) and those who didn’t ($7.50 threshold). For the majority of respondents, variable fees —i.e., those that changed based on demand—were the most frustrating type of fee (31%). 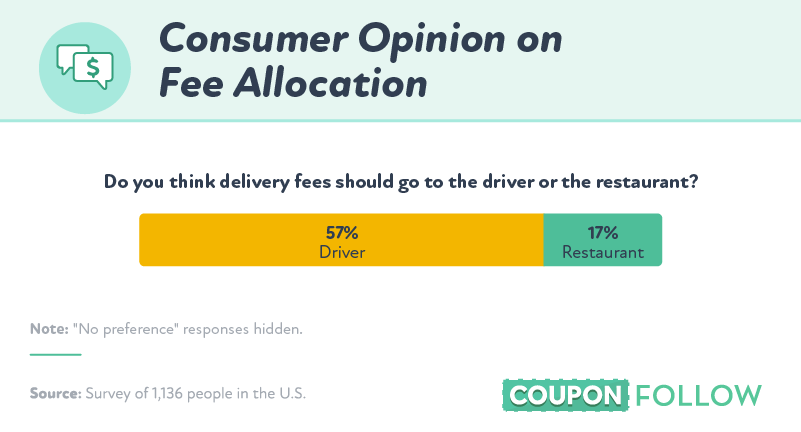 Perhaps another reason people were so averse to fees was that they weren’t sure or weren’t happy with where they were going. While nearly 60% wanted delivery fees to go directly to the driver, 17% preferred they went to the restaurant or grocery store from which they ordered. The remaining 26% had no preference where the delivery fees went. It’s important to note that the role of the delivery driver has become especially difficult since the pandemic. New York City Council, for instance, has recently introduced legislation aimed at legally protecting the working conditions of delivery drivers. Tipping the driver is an option both on and off all available delivery apps.

Staying Nourished During the Pandemic

With the pandemic emerging as a key factor in how people felt about delivery costs, we knew we had to dig a little deeper. The next section of our study explored which demographics were leaning most heavily on delivery as a direct result of COVID-19. 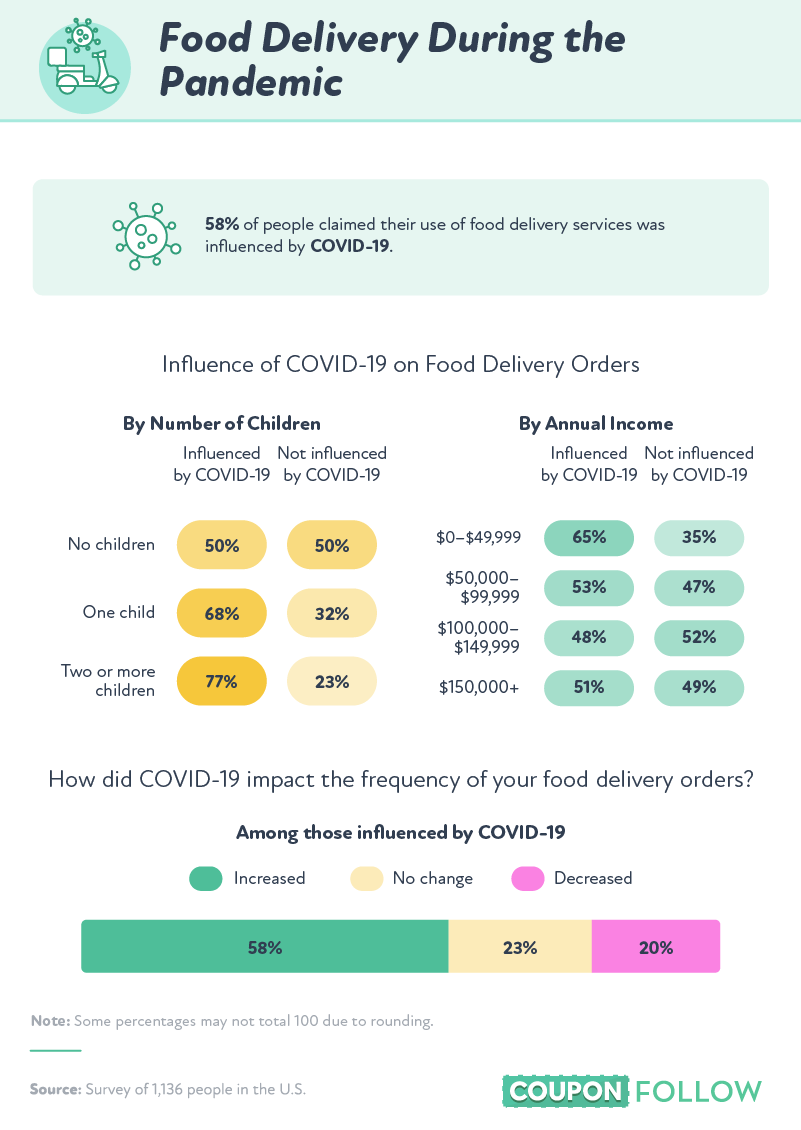 The significant majority of people reported their food delivery app use was motivated by the pandemic and emerging new variants (58%). Whether that was due to restaurants closing for in-person dining, individual attempts to limit exposure, or a commitment to supporting local businesses was unspecified. Nevertheless, the pandemic had an enormous influence on the use of food delivery services.

The pandemic was even more of a motivator for two key groups: parents of multiple children and those from lower income households. It was observed that respondents without children were just as likely to be influenced by COVID-19 when it came to food delivery app usage as not. However, over 3 in 4 respondents with two children or more claimed COVID-19 influenced their food delivery usage. In terms of annual income, food delivery app usage for respondents in lower income brackets was more influenced by the pandemic than those in higher income brackets. This means that those who are likely busier and for whom each paycheck is incredibly important were having to spend more on food and its markups to get by during the pandemic. Among those who said COVID-19 had affected their use of food delivery services, 58% said they were now placing orders more frequently than ever before.

The Future of Delivered Food

After asking respondents to reflect so much on their current food delivery behavior, we wanted to end the study by giving them the chance to look forward. Specifically, we asked what (if anything) people plan to do to reduce their spending in 2022. 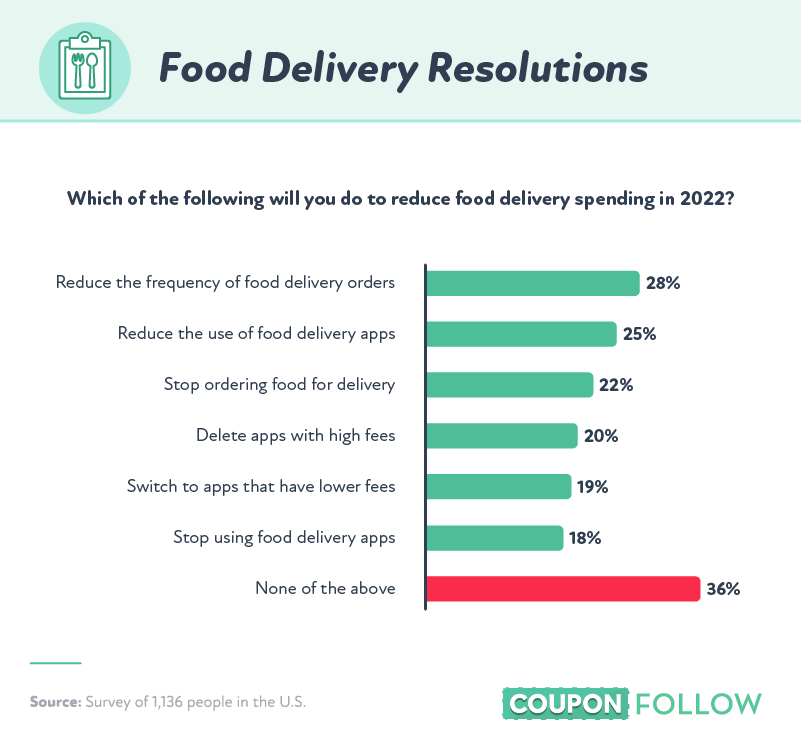 The most common answer we heard was that people had no intention of reducing their food spending whatsoever. Those who did want to rein things in were most likely to reduce the frequency of their food delivery orders (28%) or reduce the use of apps (25%) as opposed to stopping delivery altogether (22%).

Keeping Your Belly and Your Wallet Full

Food delivery is clearly an integral part of life for many Americans. Some demonstrated a willingness to pay markups of up to 75% on their orders, while many had been motivated by the pandemic to spend more than ever on food delivery services. It was ultimately delivery fees that were most likely to upset people, motivating them to switch apps or stop ordering altogether.

But fees and high costs shouldn’t get in the way of your ability to enjoy food without breaking the bank. CouponFollow is on a successful mission to help millions of people access the goods and services they need at discounted prices. Whether it’s clothes, school supplies, or food, CouponFollow can help make your hard-earned money go further on the things that matter most.

Survey data have certain limitations related to self-reporting. These limitations include telescoping, exaggeration, and selective memory. We didn’t weight our data or statistically test our hypothesis. This was a purely exploratory project.

Whether you’re hungry for food delivery or delivered knowledge, this article may be helpful for you to share with someone you know or a larger audience. You are welcome to do so, just be sure your purposes are noncommercial and that you link back to this page.