It’s been a difficult few years for most Americans. The economic impacts of the global pandemic are causing inflation, straining citizens’ wallets and making it even harder to stay afloat. With the holidays fast approaching, we wanted to understand how this might affect their gift buying. We asked over 1,000 Americans about their holiday budgets this year, how they plan to make it work, and where they might be cutting back to keep the season merry and bright.

Planning for the Holidays When Money Is Tight

Making a list is a big part of preparing for the holidays, and checking it twice often means figuring out how much you can spend on gifts and on whom. In the first part of our study, we asked respondents what that looks like for them this year. 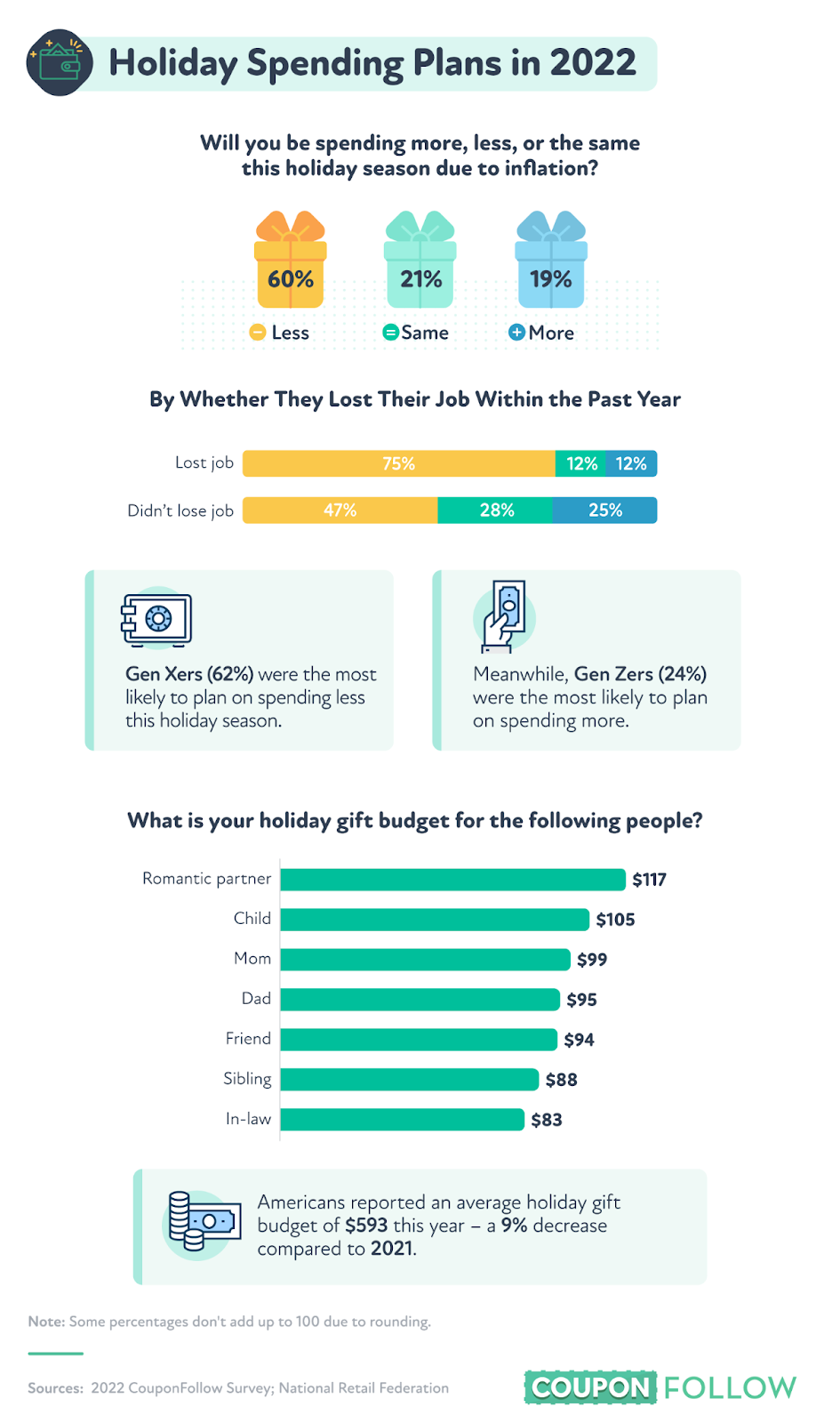 Unfortunately, three-quarters of Americans said they’d be spending less this holiday season due to losing a job. But we’ll probably see a lot of holiday cutbacks this year across the board, considering nearly half of those who were planning to reduce their holiday spending hadn’t experienced a job loss (47%). Other economic factors, like increasing food costs, have likely influenced their decision to cut back this year.

Of the gifts our respondents have planned on purchasing, they’ll be spending the most on their romantic partners: an average of $117. Kids came in second on their lists, with the amount budgeted for their gifts averaging $105. Perhaps this will be less of a surprise if you consider that not all respondents have children, but still – don’t most people have at least one child in their life deserving of a holiday gift?

Of all the ways to fit everyone on your gift list, one that many are using this year is shopping early, with 38% of respondents planning to start their holiday shopping in November. Nearly as many started in October (31%), and some even shopped as early as September (13%). It’s never too early when you’re on a budget.

The saddest part about having to tighten your holiday budget is sacrificing gifts for certain loved ones. In the next part of our study, we asked respondents who they planned to cut from their gift-buying list this year and what their alternatives might be. 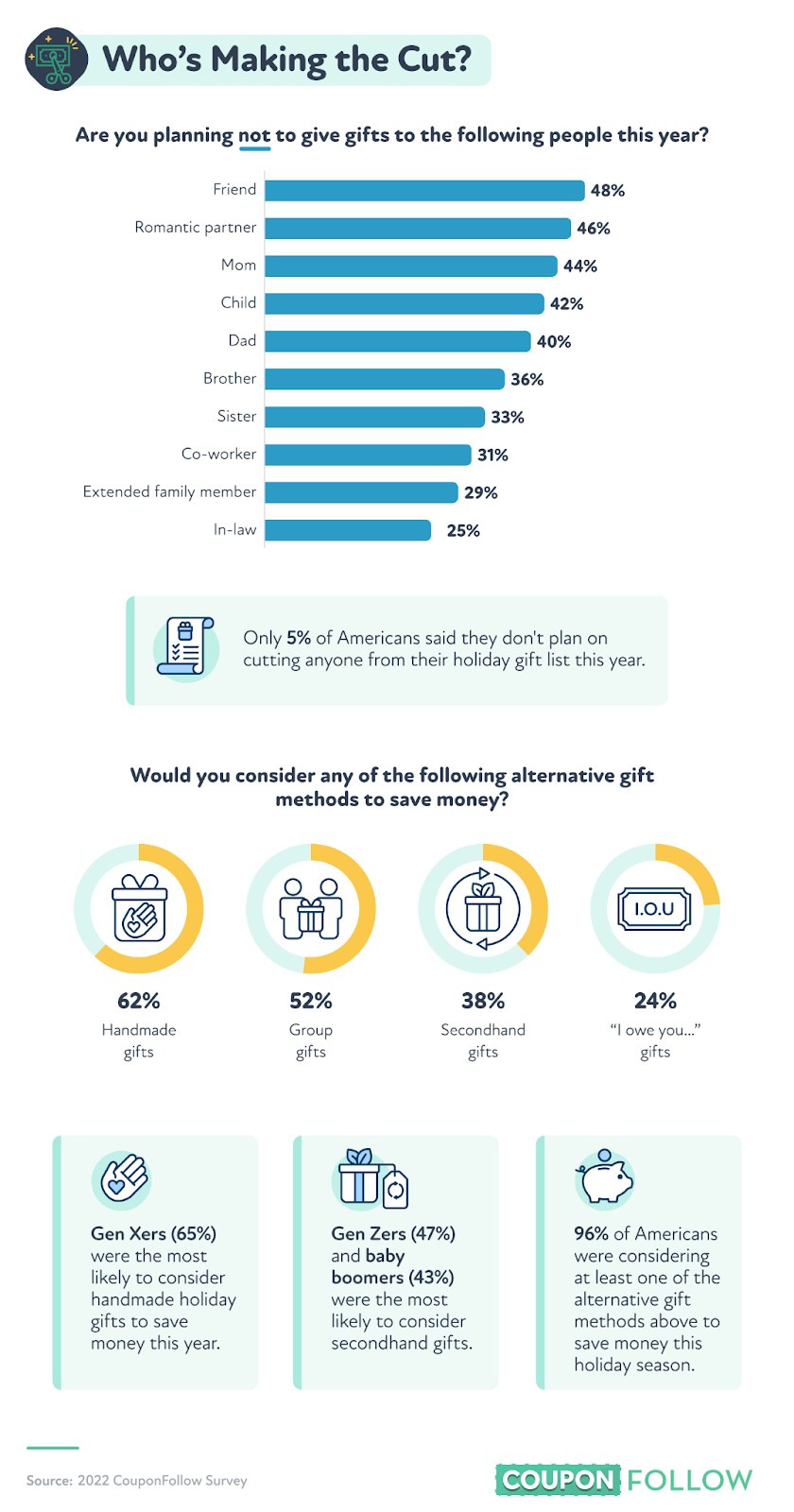 Only 5% of respondents said they aren’t planning to cut anyone from their holiday shopping list this year. According to almost half of respondents (48%), friends will likely be the first to get cut, followed by romantic partners (46%). A good friend or partner would understand the financial strain of the holidays and gladly move aside to allow gifts for someone’s parents or children instead.

Fortunately, our respondents will also be getting creative to make gift-giving more accessible this year. There are plenty of ways to DIY a heartfelt, low-cost gift or one that costs quality time rather than money. We found that most Americans would consider creating handmade gifts (62%) or going in on group gifts (52%) to save money. 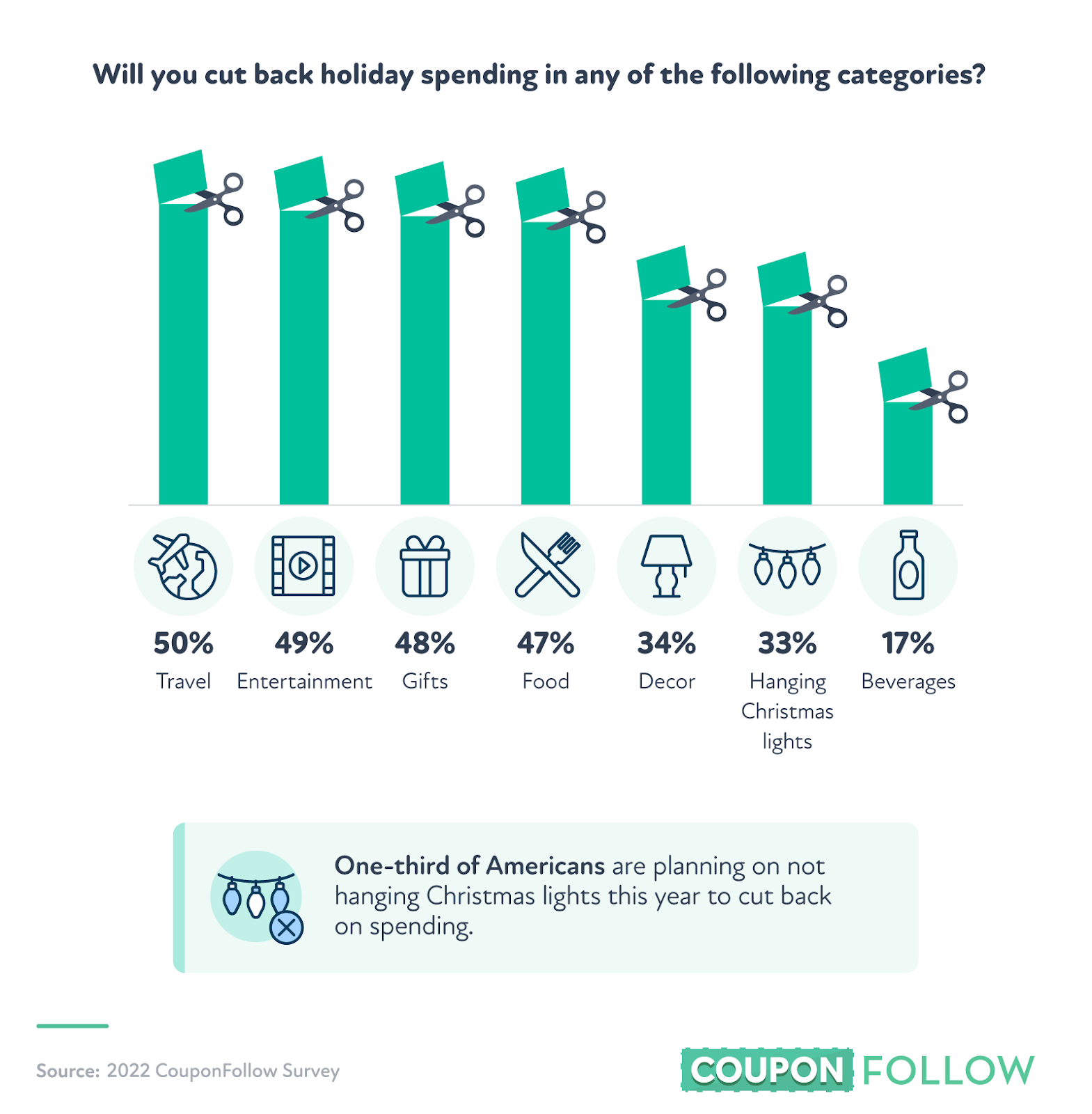 It’s not just the gifts that Americans are planning to cut back on this year. Half of our respondents said they’ll spend less on travel, too – especially baby boomers, who made up 55% of those who shared this saving strategy. Despite plane tickets finally dropping, gas prices have risen again, making those “over the river and through the woods” trips a pricey prospect this winter.

Many are also passing on the figgy pudding this year. Of the 47% of respondents who said they’ll cut their holiday food budget, more than half were Gen Zers (54%). Others we surveyed said they’d reduce their decorating budget (34%), and many even planned to skip hanging Christmas lights (33%).

How To Save During the Holidays

There are ways to save money during the holidays that don’t involve taking anyone off your gift list. Next, we asked about Americans’ strategies to have a frugally festive season. 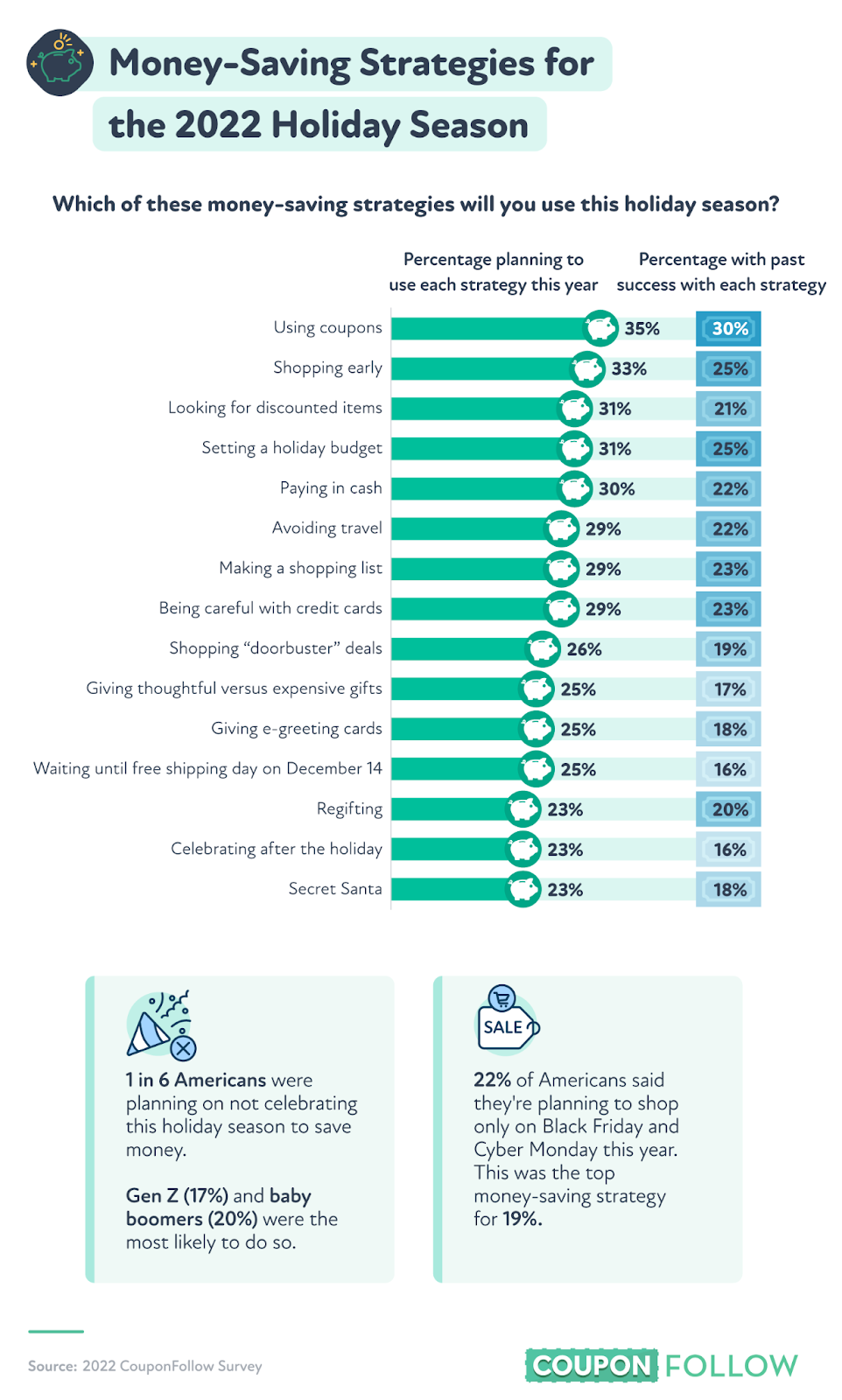 Couponing was the most popular saving strategy, according to 35% of our survey participants. Early shopping was also a common practice, with 33% saying they planned to shop earlier than usual this year. Women were more likely than men to use these cost-cutting measures, being 43% more likely to plan on using coupons and 39% more likely to shop early. Never underestimate the saving skills of a woman on a budget!

Nearly one-quarter of respondents (22%) said they plan to shop only on Black Friday (the day after Thanksgiving) and its newer counterpart, Cyber Monday (the following Monday). Considering the pandemic and economic inflation didn’t stop Black Friday shoppers last year, it’s safe to say that even more people will be on the hunt for those deep discounts this year.

In the last part of our study, we explored the popularity of regifting. What kind of presents will people be regifting this year and to whom? 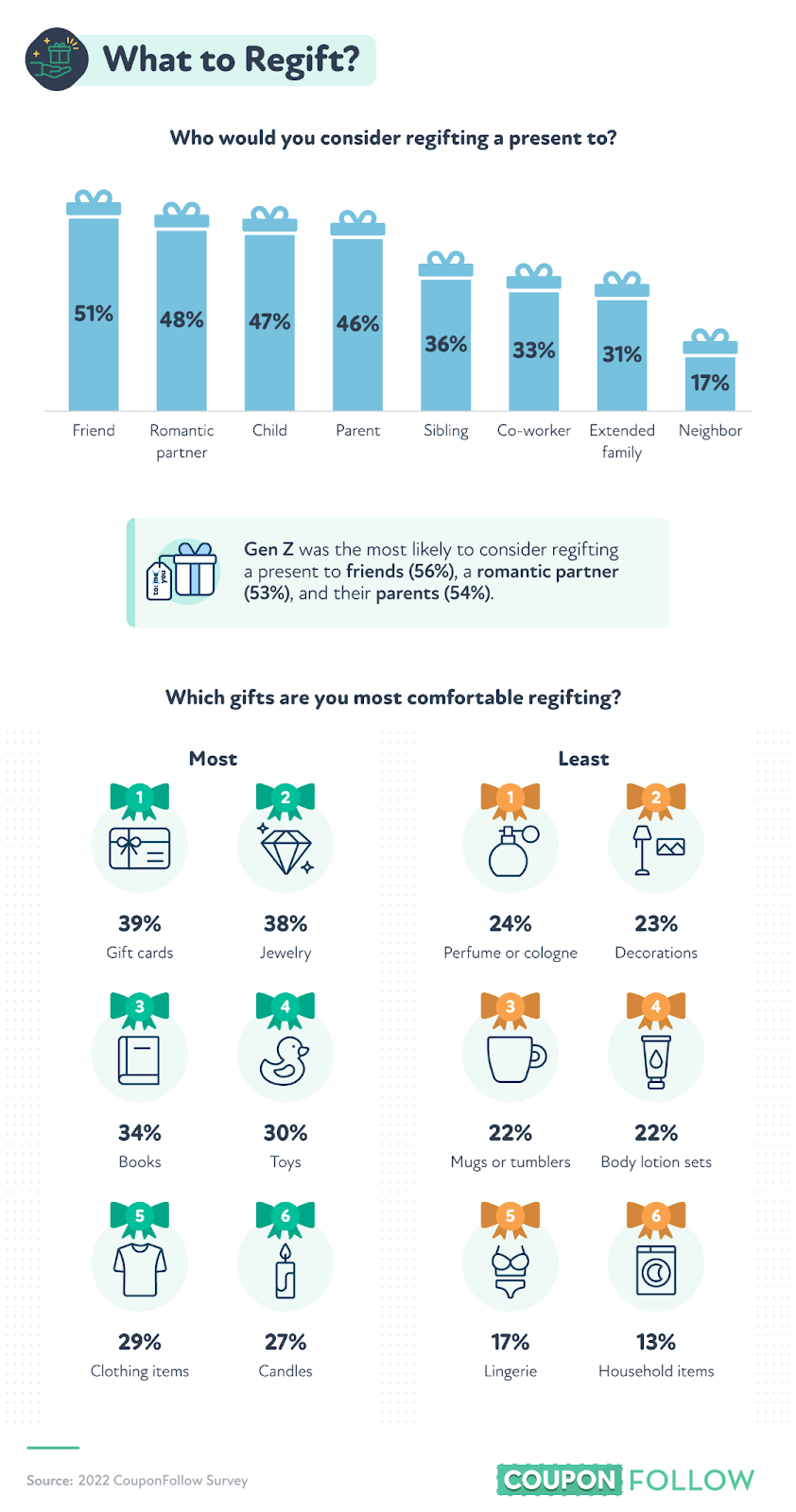 Regifting has become accepted as an alternative, sustainable form of gift-giving. Gifting an item that was once given to you, as long as it’s still new or in good condition, is a great way to save money and reduce waste. It might even be appreciated as more thoughtful than a new store-bought gift, especially if it’s something you know the recipient will love.

The Reality of the Holidays in 2022

Many Americans are facing difficult financial realities lately, and it doesn’t look like it will get any easier during the holidays. Couponing and early shopping were common saving strategies shared by our respondents, but some may need to remove a few names from their shopping list to stay within their budget this year. However, there are ways to give that don’t involve money. Regifting previously received gifts is a thoughtful and sustainable alternative, and handmade gifts are often more meaningful than those purchased new. However you spend this holiday, remember that time can be more valuable than money.

For this campaign, we surveyed 1,014 Americans to explore their holiday spending plans. Among them, 37% were women, and 63% were men. The generational breakdown was as follows: 25% Gen Z, 35% millennials, 25% Gen X, and 15% baby boomers. For short, open-ended questions, outliers were removed. To help ensure all respondents took our survey seriously, they were required to identify and correctly answer an attention-check question. The margin of error is plus or minus 3%, with a 95% confidence interval.

CouponFollow is your destination for the latest coupon codes. Whether you’re looking to save money from online retailers, TV and Internet providers, or even airlines, CouponFollow is the place to find the very best deals.

If you’re a holiday shopper on a budget and enjoyed our study, you’re more than welcome to share. We just ask that you link back to the findings and that your purposes are noncommercial.