In an outer world of chaos, we’re often told to fix our own homes first. Turning the finger inward, toward our personal spaces, can we truly say that our homes are organized enough to encourage a better world for ourselves and others? In certain instances, the state of your room could indicate a psychiatric condition. But even if things aren’t that extreme, decluttering your space is actually doctor recommended for everyone.

How do American homes look in this historically messy time? Do they function in a way that keeps us healthy and happy? And can getting them organized correctly really make things better? After speaking to more than 1,100 people across the country, we have data-backed answers. Keep reading to find out.

Time to Get Organized

Mastering organization may involve mastering the fourth dimension: time. The first section of our study looks at how much time respondents currently spend on organizational activities compared to their overall organization level. We also looked at the most common times of day and year to organize. 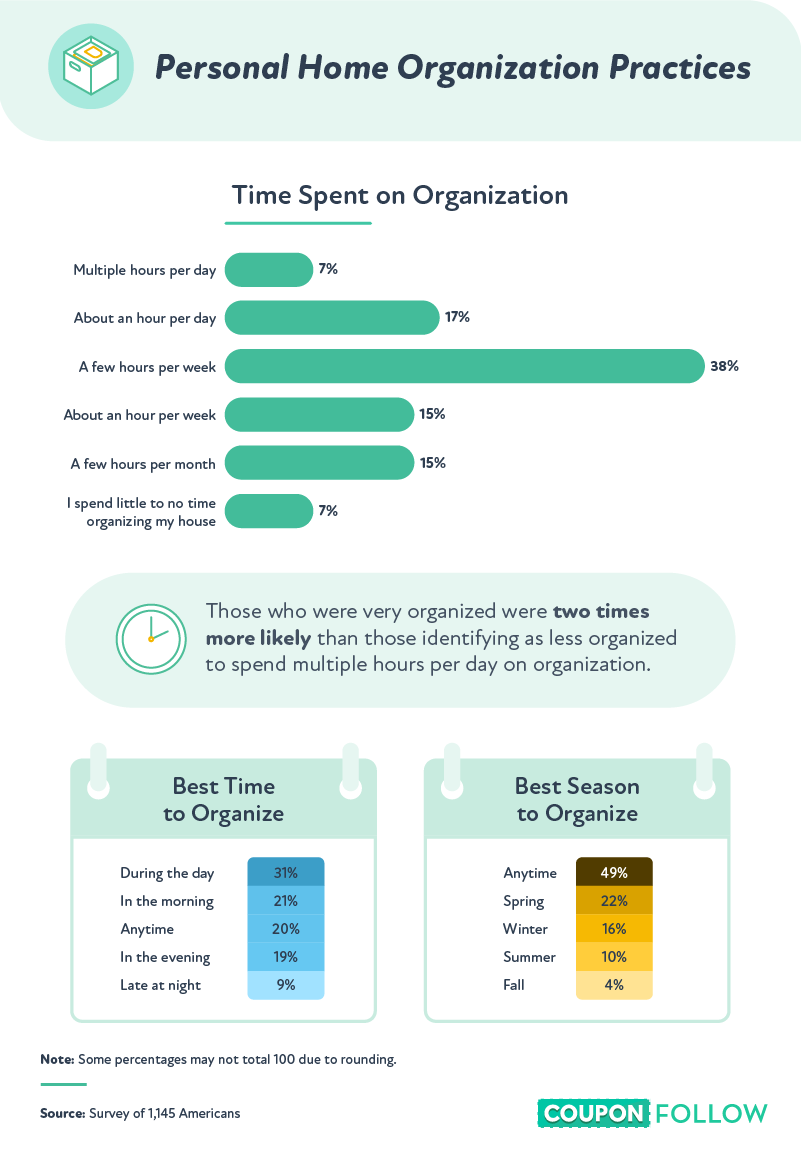 Staying well organized would appear to involve a heavy time commitment. Respondents who were highly organized were twice as likely to spend multiple hours each day actively organizing. Most Americans, however, did not consider themselves highly organized. Instead, most fell into the “moderately organized” category and spent just a few hours each week on organization.

While spring-cleaning did live up to its reputation and garner more closet cleanouts than any other season, but most people said they considered any time of year appropriate for an organizational spree. Most were also in agreement that during the day as opposed to the evening or late night was a better time to clean.

Unfortunately, the organization process can also lead to some gross discoveries. We asked respondents about some of the best and a lot of the worst things they had ever found while organizing their home. 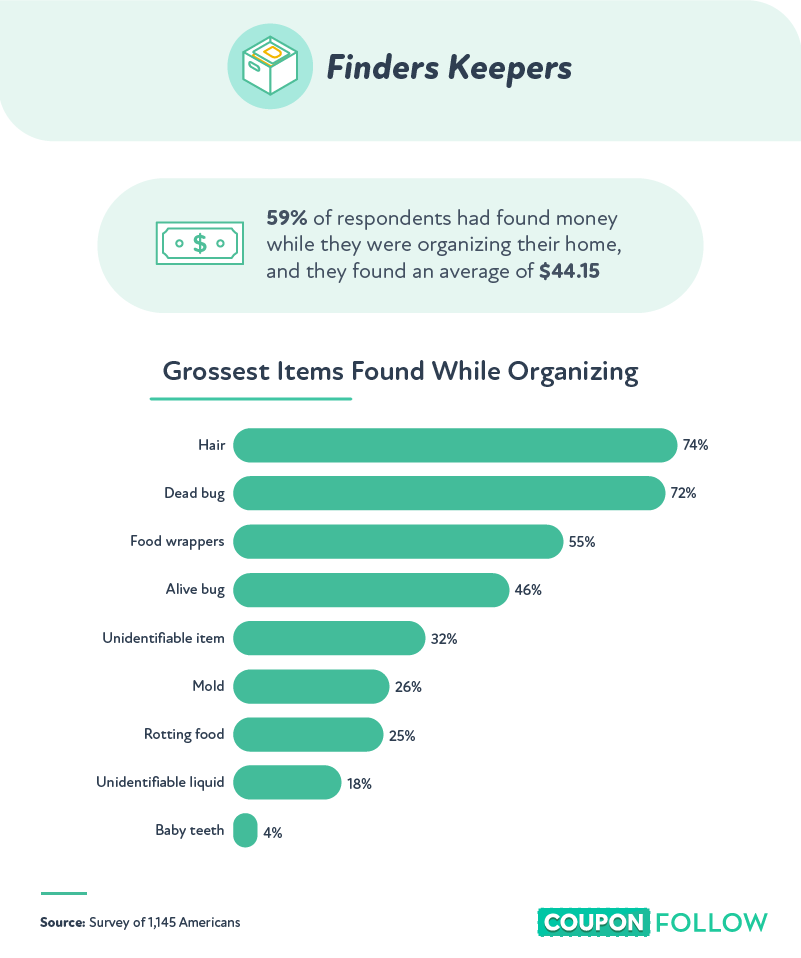 On the positive side, over half of respondents found money while organizing their spaces, and the amount found was on average $44.15. But there were also much more undesirable finds. The most commonly discovered item was hair, but near equal amounts came across dead bugs. Nearly half of respondents found bugs that were still alive. One in four respondents found mold while organizing. Indoor mold can carry several health risks, and so it is important to find and clean up quickly. Perhaps even more sinister, though, were the unidentifiable items and liquids discovered by 32% and 18% of respondents respectively. To further understand the mess, we also asked respondents about the spaces where they found the grossest things. 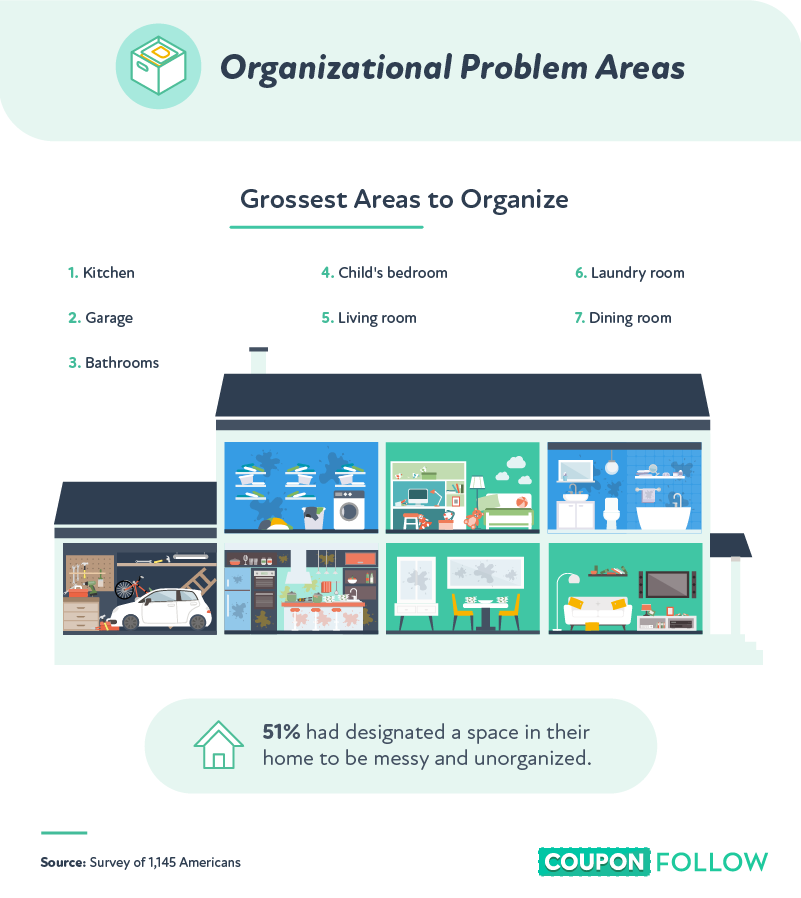 Even in the midst of messiness, there was some method to the madness: 51% of Americans had a space in the home specifically designated for disorganization. Though the kitchen wasn’t necessarily that space, it was the No. 1 room that respondents found the grossest to organize. Especially during a time when health and finances are under pressure, a functioning, clean kitchen is essential for every household. Kitchen organization tips are fortunately free and easy to find.

Another well-utilized and very important area of the home – children’s bedrooms – was also one of respondents’ messiest and least organized spaces. Although frequent usage of an area may explain the increased messiness, the very fact that it’s used so often makes it that much more important to be well-organized. For both adults and kids, the bedroom is also a space important for relaxation, which is proven to be increased by a clean and tidy area.

Facing the Music of the Mess

Next, we looked at the impacts of disorganization on happiness, productivity, and mental health. We also divided respondents by organization level and compared their likelihood to struggle with things like punctuality or choosing an outfit. 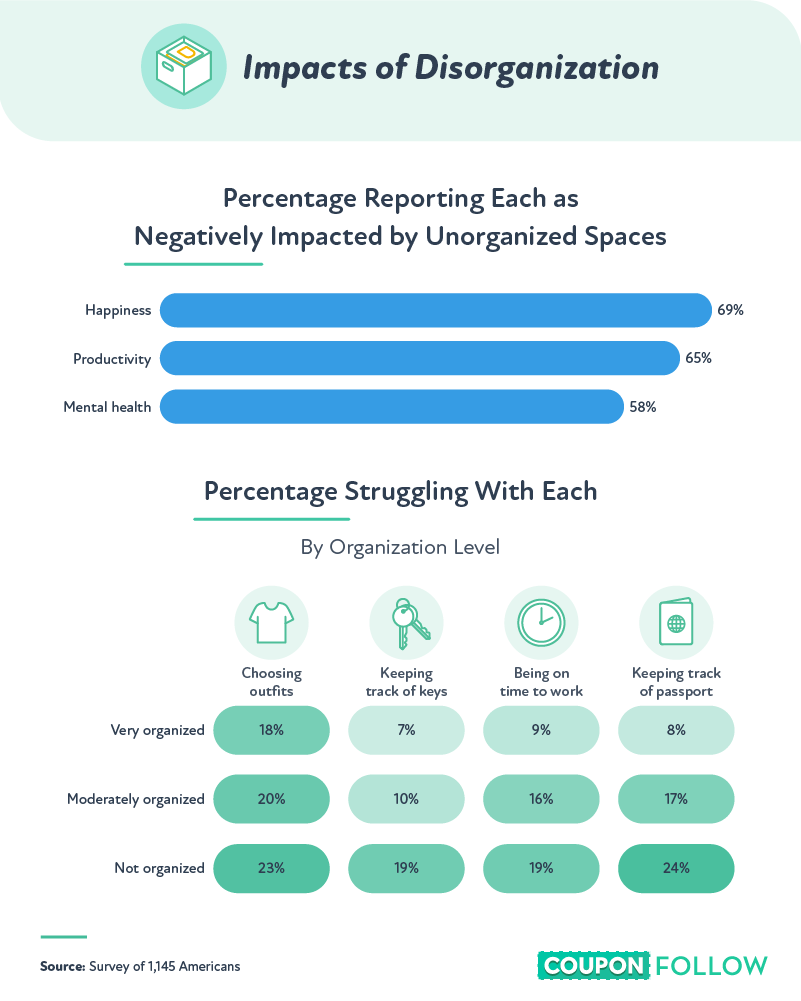 Disorganized spaces negatively impacted not only the productivity, but the mental health and happiness of the majority of respondents. Nearly 60% noticed a decline in their mental health when surrounded by unorganized space. Scientists at Princeton University Neuroscience Institute have shown that constant exposure to disorganization drains our cognitive capacity. They also showed that it drastically impairs the brain’s ability to focus. It follows, then, that 65% of our respondents noticed a decline in their productivity when faced with disorganized spaces.

The ability to perform daily chores was also heavily influenced by a person’s organization level. Even simple tasks like choosing an outfit were markedly more difficult for those who classified themselves as not at all organized. This group was more often late for work and frequently lost important items, such as their passport or keys. Even if being organized takes added time, it also saves time by preventing people from having to search for lost belongings and helping them to maintain better general focus.

How to Do It All

At this point, you may be sold on the importance of keeping your space organized but still feel overwhelmed or unsure of how to do so. This section of our study asks respondents where they find their inspiration and information as well as the most common hacks they’ve tried. 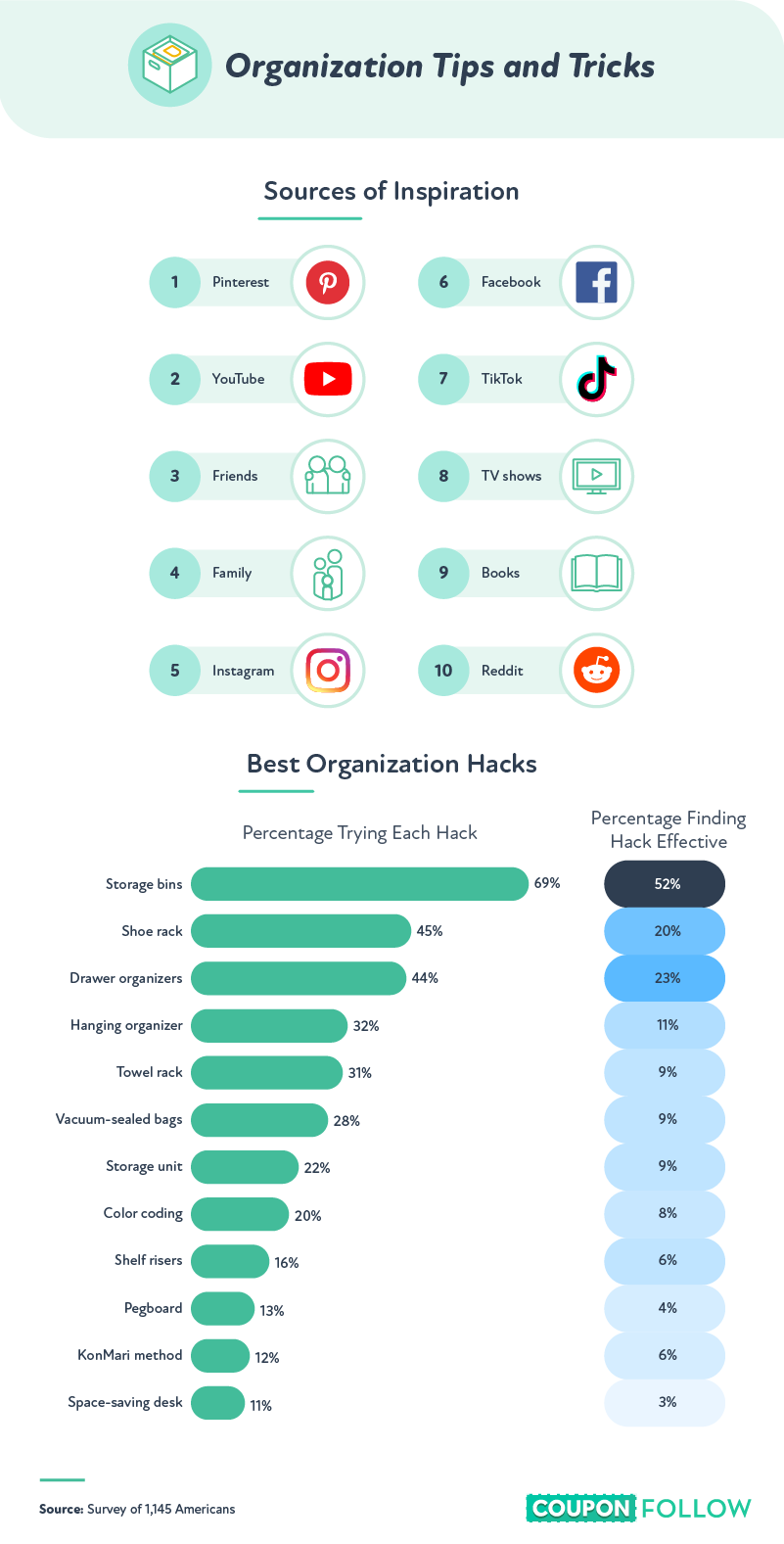 Most home organization hacks involved storage objects of some kind (e.g., storage bins (69%), shoe racks (45%), and drawer organizers (44%)). While these methods often proved helpful, they were ultimately methods for accommodating existing chaos. To get to the heart of the mess, however, 12% tried the KonMari method, a method which helps people “get rid of clutter for good,” by going through the entire home thoroughly but once only and discarding anything that no longer brings joy.

While there were some areas where respondents did spend money, fortunately, most of the resources respondents used to stay organized were completely free. Pinterest and YouTube were the first and second most popular sources for organization inspiration, both of which are freely accessible to the public. Friends and family were also good places to start – consider those in your life that have organized spaces and see what they suggest.

It’s no surprise that so many people found their inspiration on social media. Accounts dedicated to both organizing and cleaning rack up millions of followers and views. Some of the most popular accounts include Now It’s Clean and Clean That Up! both on TikTok with 1.8 million and 1.1 million followers respectively. On Instagram, Clean Mama offers advice to her 750k followers and Lynsey Queen of Clean has extended beyond her 261k followers and written several books. These are just a few examples of the extensive network of cleaning and organizing influencers. 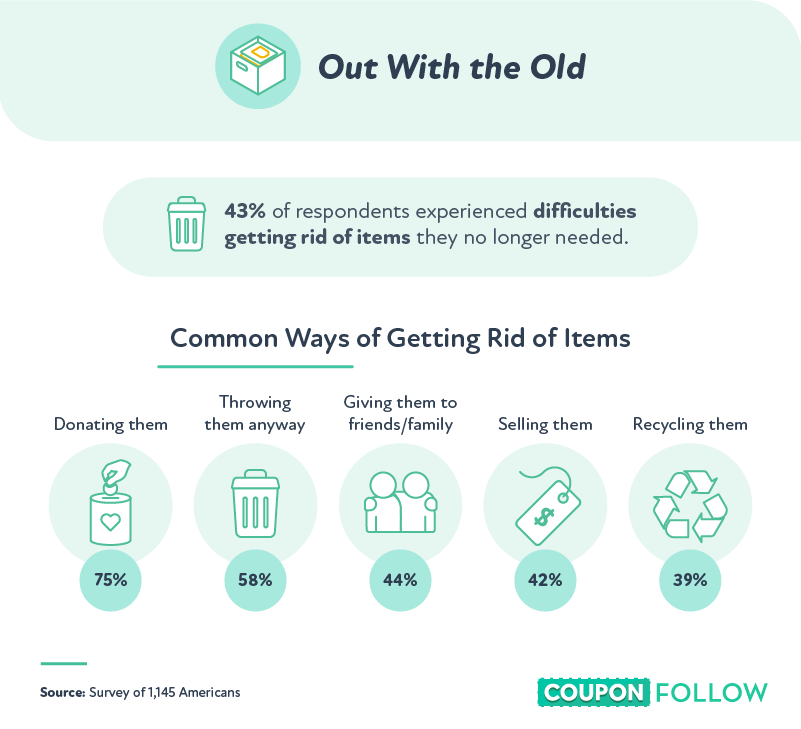 Letting go wasn’t easy for everyone. After all, many objects can represent deeply sentimental things – perhaps children’s clothing that they’ve outgrown or souvenirs reminiscent of times gone by. Forty-three percent of the people we spoke to expressed finding it difficult to get rid of items, even if they no longer needed them.

Donating was the most common method for doing so, according to 75% of participants. Throwing away was also very common. If the item does have some life, donating can provide valuable resources to people in need as well as divert waste from landfills. Forty-two percent of respondents even managed to make money off their old belongings by selling them, creating a win for their wallet, the buyer, and the planet.

Organization as an Industry

With so many Americans feeling disorganized and experiencing the associated negative impacts, many are happy to pay for a solution. The last section of our study looks at how much the average American is willing to pay for various organization services. 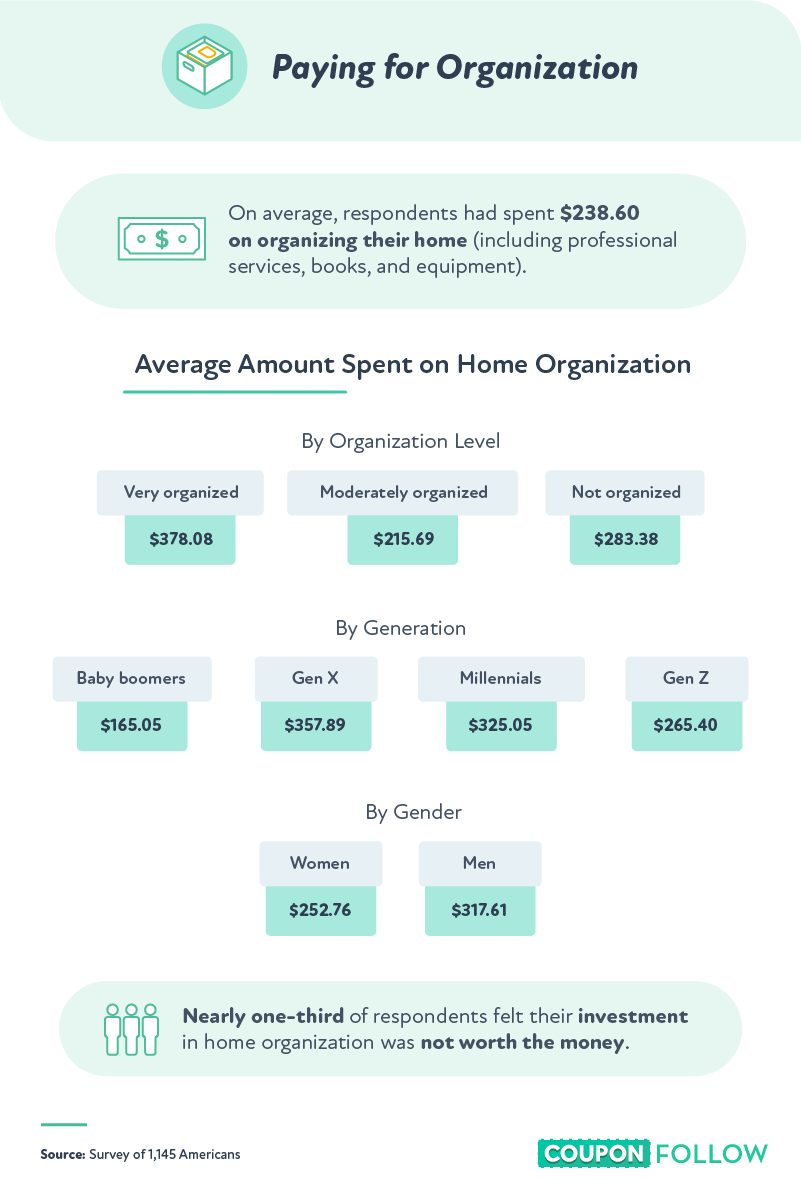 On average, everything from books to storage equipment ran to a total bill of $238.60. Unfortunately, nearly one-third of respondents also said their investment in these areas was not worth the money. However, this dissatisfaction varied depending on the amount spent. Those who spent between $100-$499 were the least likely (25%) to regret their investment. Surprisingly, those who were most disappointed were those who spent less than $100. It seems a certain level of monetary investment is required to reap the best rewards. Even among those who spent over $1000 only 31% were displeased compared to the 37% of those spending less than $100.

Gen Xers, millennials, and men were generally prepared to spend the most on home organization, spending upwards of $300. The group that spent the most were those that considered themselves very organized; although those that classified themselves as not organized spent more than their peers in the moderate category, suggesting that spending does not always equate to the best results.

Furthermore, we asked our respondents if they had ever paid a professional to come in and organize their home. Only 5% of baby boomers said they had hired someone making them the least likely generation to call in help.

Our study ultimately revealed just how damaging disorganization can be, as well as the fact that Americans are often unsure how to tackle the issue. While many respondents noticed lapses in mental health and productivity when living in messy spaces, the money they spent to tackle the issue was often felt not to be worth it.

Not all spending is created equal, however. Many resources for effective organization are completely free or heavily discounted, and often do a better job of helping tackle the root causes of messiness. To browse some of the discounts that can help you save and get organized, head to CouponFollow. We are constantly updated with the latest and most exhaustive selection of coupons and discounts for whatever books, equipment, clothes, (and virtually anything else) you need. To get saving, head to CouponFollow.com now.

We surveyed 1,145 respondents about their home organization practices and habits.

For short, open-ended questions, outliers were removed. 327 of these respondents were baby boomers or older, 345 were Gen Xers, 364 were millennials, and 109 were Gen Zers. 601 respondents were women, and 544 were men.

To ensure all respondents took our survey seriously, they were required to identify and correctly answer an attention-check question. And in our analysis, outliers were removed from free response questions.

Survey data are subject to limitations associated with self-reporting, such as exaggeration, telescoping, and selective memory. We did not weight our data nor complete any statistical testing. This is purely an exploratory study of home organization habits.

Getting yourself organized is an impactful and often completely free way to upgrade your life. If you think this information would be helpful to your audience, this research is yours to share. Just be sure you link back to this page and that your purposes are noncommercial in nature.