New Research: Working Americans Reveal What a Pay Raise Would Mean to Them

How much money would it take to change your life?

Considering that the majority of Americans spend more than they earn, it’s nearly guaranteed that a raise could help their financial situation. But, we also know that as people earn more, it’s easy to increase spending proportionately – which begs the question, how would a raise really impact the average American lifestyle?

We surveyed more than 1,100 full-time employees nationwide to explore how much of a difference a change in their pay would make. Employees shared the amounts they would need to improve their mental and physical health and exactly how they would allocate the additional funds. And because the value of the dollar is interpreted differently depending on individual circumstances, we also took a look at demographic trends to see how income, gender, and age impacted respondents’ post-raise plans. Keep reading to see what a salary change would mean for workers across America.

Amounts That Make a Difference

Not all raises are created equal. The first section of our study looked at the size of a raise needed to notably improve the life of the average American. 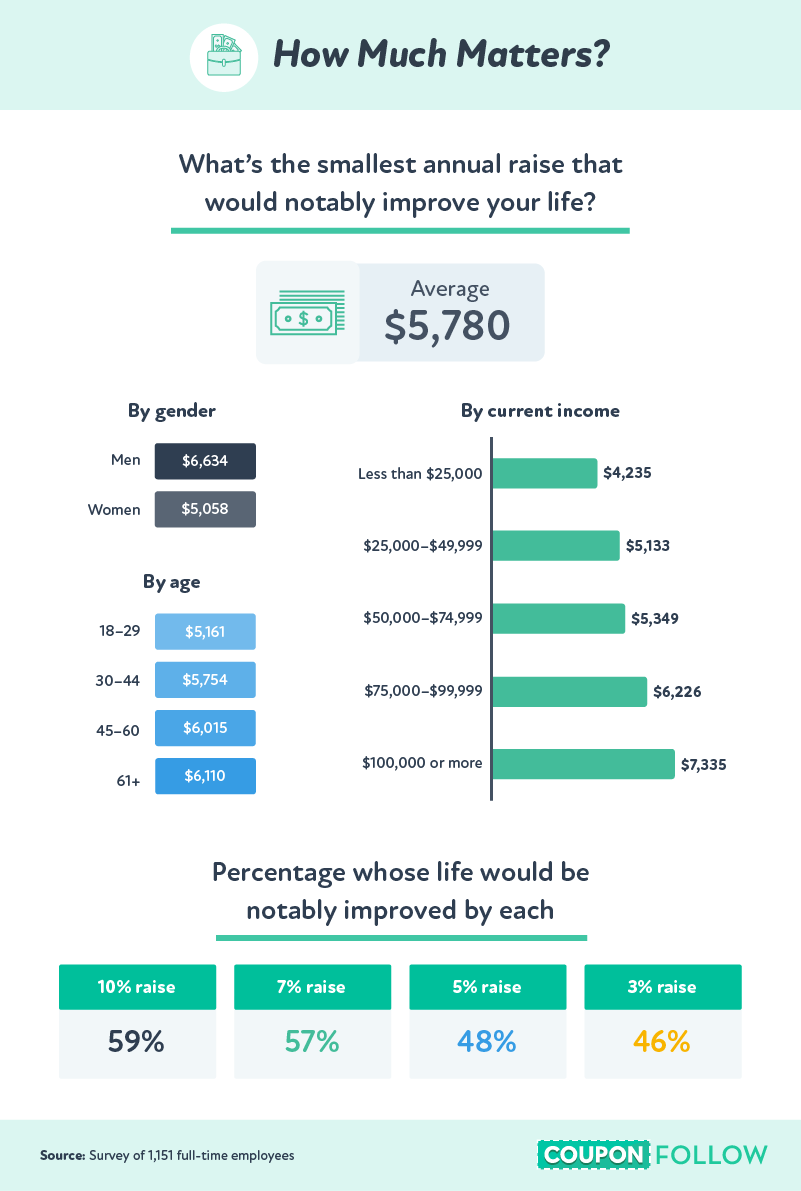 The average American would notice an improvement in the quality of their life with an extra $5,780 each year, or roughly $482 extra per month. To put this number into perspective, in 2020 the average American spent around $412 per month on groceries alone.

While the average figure was $5,780, far less would make a difference for a large number of people. In fact, 1 in 5 respondents reported that a raise as small as $1,000 would notably improve their life. Among respondents with a household income below $25,000, this number rose to 1 in 3. That small increase, only about $83 per month, would make life better for 20% of all Americans and a third of Americans currently making below $25,000.

In addition to income, gender also made a big difference to the minimum amount required to impact respondents’ lives. Women reported that they would see a notable life improvement with about $1,600 less than men. While the pay gap may explain this in part (in the U.S. in 2020, women earned 84% of the amount men did) it doesn’t explain it entirely, as the average amount men required to make a difference was considerably higher than that required by women. Perhaps a different value system or financial approach is surfacing here.

Impact of a Pay Cut

Before diving into the specifics of how employed Americans would spend a raise, we wanted to explore the impact of a hypothetical loss or reduction of income. 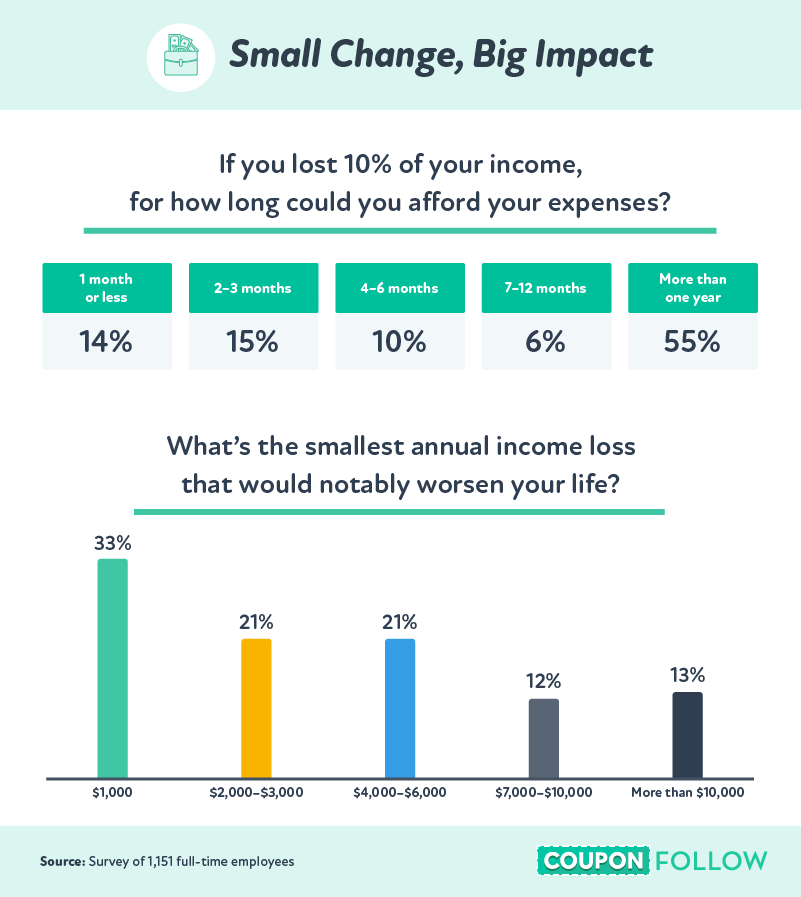 Simply put, a theoretical pay cut could spell disaster for many. In the wake of a pandemic during which nearly 10 million Americans lost their jobs, nearly 2 in 5 workers would only be able to pay the bills for 6 months or less if they lost just 10% of their income.

One in 3 Americans said that even losing $1,000 a year would make their life notably worse. As many Americans live paycheck to paycheck, losing $1,000 a year could send some over the edge into poverty. Among respondents taking home less than $25,000 annually, a staggering 58% said their life would be notably worse following a pay cut of $1,000. During recent times of financial hardship, with Americans struggling to pay bills and attempting to reduce expenses wherever they can, an annual loss that may seem trivial to some could be life-alerting for others.

Having determined the amounts that would make an impact, we moved on to explore the impacts themselves. Respondents revealed the areas of their life that would be improved by an increase in pay and how that would vary depending on the size of the raise. 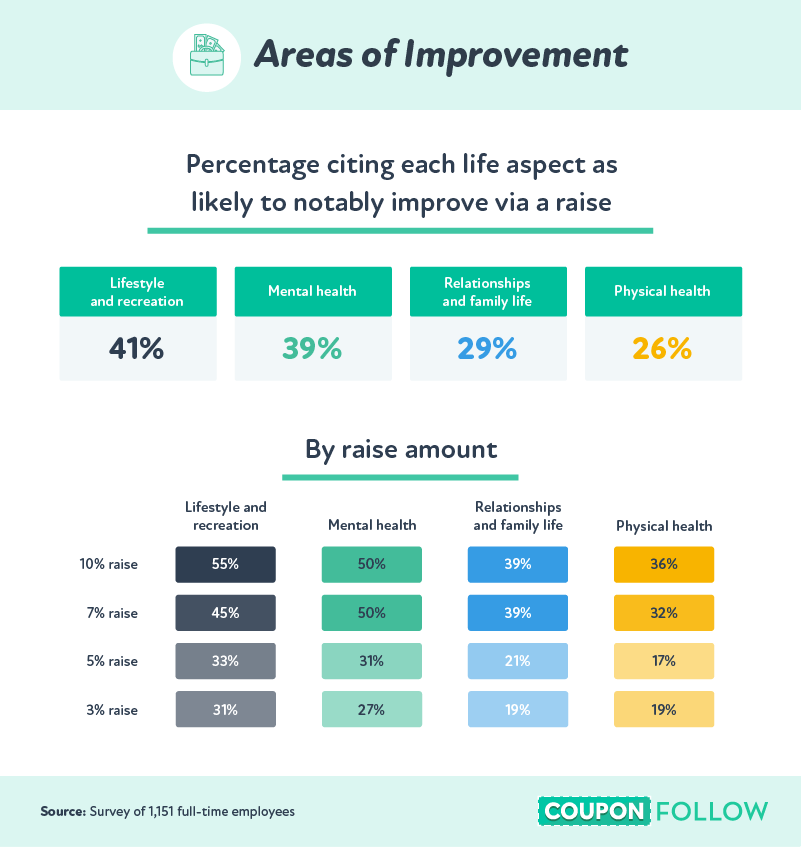 Lifestyle and recreation would be the first things to improve in the event of a raise. With just a 3% salary increase, 31% of Americans believed they would see noticeable differences in this category. However, more than half of respondents reported they would need at least a 10% raise to be able to say the same. Women once again anticipated an improvement in their lifestyle at a lower threshold than men.

Thirty-nine percent of Americans reported that their mental health would notably improve with a raise of any amount. Among younger respondents, that percentage rose to 55%. This is incredibly meaningful in a country where 1 in 5 people have a diagnosed mental health condition, and where rates of anxiety and depression continue to rise among Generation Z.

Since over 28 million Americans were without health insurance in recent years, physical health, while perhaps more straightforward than mental health, could also be improved by a modest increase in financial prosperity. While 50% said that a 7% raise would notably improve their mental health, 32% were able to say the same for physical health. In terms of health, a little extra can go a long way – whether it’s the ability to afford needed medical procedures or mental health care.

Lastly, we asked respondents where they’d allocate raise capital to, in order to better understand their spending priorities. The categories they were given to choose from were encompassed by essentials (such as rent or groceries), financial betterment (investing, retirement savings, etc.), and nonessentials (travel, entertainment, etc.). 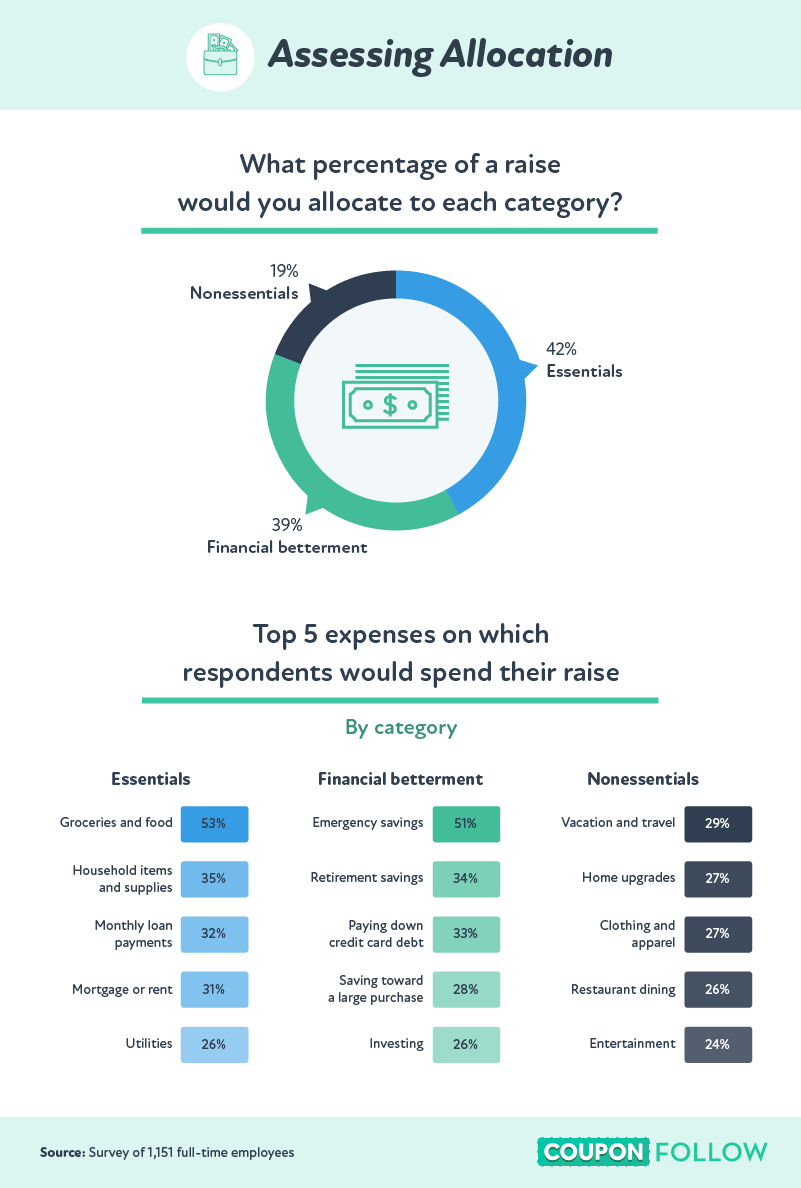 On average, respondents would spend the majority of their raise (42%) on essentials. Within this category, 53% of respondents would allocate funds to groceries and food; 35% would spend on household items and supplies; and 32% would spend on monthly loan payments. Sadly, food insecurity persists for roughly one tenth of Americans today, and with rising inflation and bare grocery store shelves, it’s anticipated to get even worse.

After essentials, financial betterment was the next most common category for raise allocation. More than anything else, Americans wanted the extra money to add to their emergency savings. With over half of Americans only having less than $1,000 on hand for unexpected expenses, it’s understandable that respondents would want to add to it. An emergency savings fund can be incredibly important in keeping one out of debt in the event of an emergency – be it sudden injury or car repairs that aren’t covered by insurance.

Even the smallest of raises had respondents reimagining and reinvigorating their life. An increase of just 3% a year correlated with anticipated improvements in everything from mental and physical health to family relationships and overall lifestyle. An annual raise of as little as $1,000 would reportedly improve the life of more than 20% of Americans. Moreover, Americans wanted to allocate those raises to basic expenses, such as groceries and emergency savings.

If you also feel that a relatively small amount could significantly improve your life, you don’t have to wait for a raise to make the change. CouponFollow offers 24/7 access to the best deals and savings the internet has to offer. Whether you want to spend less on groceries, beauty, tech, or anything in between, CouponFollow helps you keep more money in your pocket.

In some cases, questions and responses have been rephrased for clarity. Survey data have certain limitations related to self-reporting. These limitations include telescoping, exaggeration, and selective memory. We didn’t weigh our data or statistically test our hypothesis. This was a purely exploratory project.

Extra cash is always a good thing, no matter who you are. If you think this data could help make that happen for you or someone you know, you’re welcome to share this information. Just be sure your purposes are noncommercial and that you link back to this page.