How Your Favorite Holiday Meal Prices Have Changed From Inflation

Inflation might be on track to gobble up the Thanksgiving budgets of many Americans in 2022. We compared historical food prices to their current costs and surveyed over 1,000 households to see how hard the holiday might hit their wallets this November. Read on to discover what you can expect to spend this Thanksgiving and some favorite turkey day recipes, too.

The cost of everyday goods has steadily increased over the last two decades, and seasonal items have followed suit. Let’s see how much more Americans might spend this year. 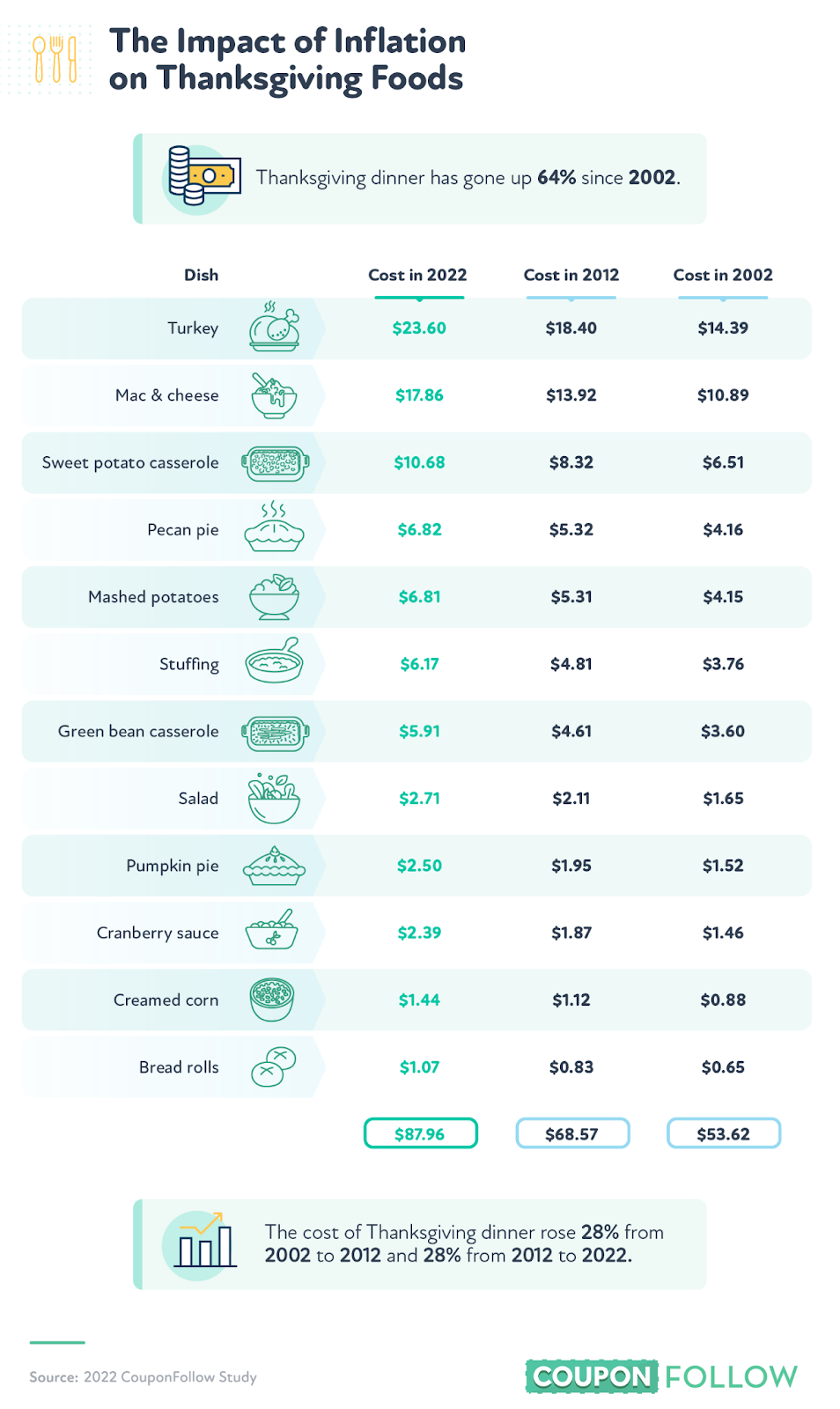 In 2002, the average combined cost of the most common Thanksgiving dishes rang up to less than $54. Today, that price has risen 64% to almost $88. The dish that’s likely to have the largest impact on budgets this year is the turkey. This meaty centerpiece has seen the greatest increase in price since 2002; A turkey that cost about $14 two decades ago is now almost $10 more. But America’s favorite side dishes have also nearly doubled: Mac and cheese has gone up by $7 and sweet potato casserole by $4.

To understand how inflated food prices may affect households across America, we asked respondents how much of the feast they planned on preparing themselves. We also evaluated spending differences between hosts, guests, and different generations.

When Thanksgiving comes around, do you love hosting, or would you rather be a guest? For some, that might depend on how much preparation is involved. We asked our respondents to weigh in with their preferences.

Only 19% said they would prepare the entire feast themselves, while 37% said they would make most of it. Many others planned to divide the work with other attendees: 40% reported they would do most, some, or half of the preparations. Hosts were most likely to say they’d prepare most of the meal (40%) and guests were most likely to prepare only some of it (49%) or none at all (27%). At least those who won’t be cooking this year (or can’t afford to) can always lend a hand with cleaning up after the festivities.

On average, Americans plan on spending $251 on Thanksgiving in 2022. Millennials expected the highest costs (about $300) and baby boomers the least ($140). Gen Z and Gen X both reported a budget of about $200. If you’re hosting this year, you might budget around $272 for turkey day food, while those heading to someone else’s place might expect to spend about $97.

We next asked respondents to rate their favorite Thanksgiving Day foods. Turns out they’re mostly a meat-and-potatoes crowd. 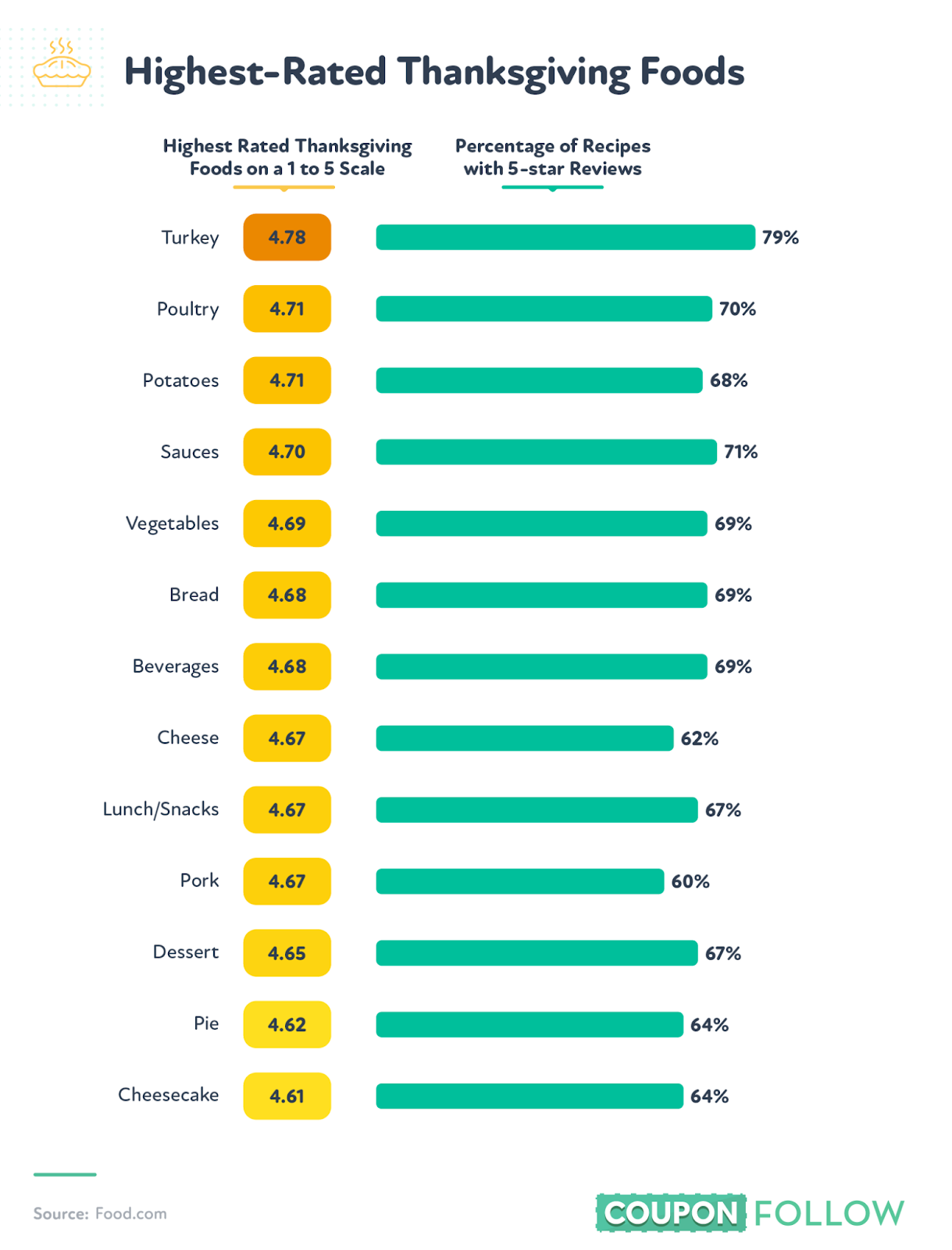 Shocking to no one is the fact that turkey rated highest (4.78) among favorite Thanksgiving foods. With 79% of recipes earning five-star reviews, it topped other options including alternative poultry and potatoes, the next-highest rated foods (4.71). Though still popular, desserts ranked lower than any savory dish, with classics like pie and cheesecake ranking toward the bottom. Perhaps most surprising was the inclusion of breakfast as a highly rated Thanksgiving food.

Hosting Thanksgiving for the first time, or need some ideas to add some variety to this year’s feast? These fantastic recipes are sure to impress.

Thanksgiving has become much more expensive over the last two decades. If you plan on hosting, be sure to budget more than you might have in the past. Although it might be well over 50% more costly than it was 20 years ago to provide a traditional feast for your family, we’ve got you covered. With our handy chart of America’s most-loved foods and our list of recipes in your arsenal, you’re sure to please every guest — whether they bring a dish or not.

For this study, we explored a recipe dataset sourced from Food.com, specifically recipes tagged with “Thanksgiving.” In total, 4,947 recipes were analyzed. Additionally, we surveyed 1,004 Americans celebrating Thanksgiving this year. Among the survey respondents, 57.2% identified as male, 42.3% identified as female, and 0.5% identified as nonbinary. 8.5% were baby boomers, 20.8% were Gen X, 60.4% were millennials, and 10.3% were Gen Z. The margin of error is plus or minus 3%, with a 95% confidence interval.

CouponFollow helps shoppers save time and money by delivering instant access to the latest discount codes. Save more on food and gifts this holiday season.

If you’d like to share the information in this study for noncommercial purposes, please provide a link back to this page.