Jingle All the Way to the Wallet

More often than not, there’s no limit to what a parent will do for their kids. This is especially true around the holidays when parents rush to buy the best toys and gifts for their children. In some cases, fights break out due to the sheer demand for certain items; and often, toy prices skyrocket to capitalize on the incredible demand for children’s gifts around the festive season.

While we all love a good discount or deal, shopping for the holidays can become an all-out war and has even been known to have serious consequences. Where is the line for parents when it comes to buying the ideal gifts for their kids? We wanted to find out, so we surveyed 1,085 people to see what they would and wouldn’t do to ensure that the kids in their life have the best gift and the best holiday experience.

Holiday budgets look different for every parent, depending on what they’re able to afford. Respondents were asked about their budget for this holiday season and how they were choosing to allocate their money. The results showed that gifts were by far the biggest priority. The average amount budgeted for gifts was $459, while $312 was assigned to holiday travel, $187 to food, and $94 to decorations. 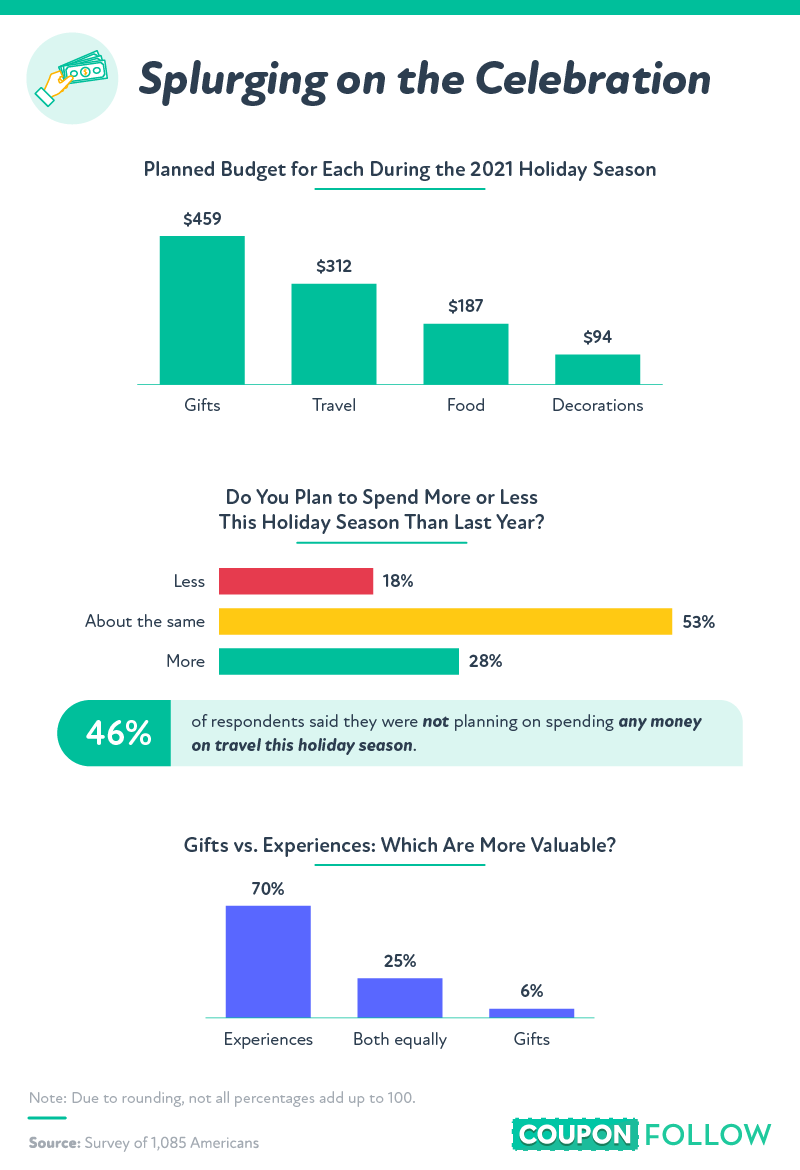 The majority of respondents (53%) said they planned to spend about the same amount on the holidays this year as they did last year, while 18% said they’d be spending less and 28% said they would spend more. Perhaps as a result of COVID-19 restrictions and fears, 46% of respondents said they were not planning on spending any money on holiday travel this year.

With all of the hype around Christmas gifts, especially among parents vying for the best for their children, respondents seemed to value experiences more than gifts. Seventy percent said experiences were more important, while just 6% said gifts and 25% found both equally valuable.

What lengths would parents go to to get the best gifts for their children, and what items would they go all out for? Showing just how ingrained technology is in today’s society, even among kids, the three gifts ranked as the most worthy of extreme measures were Apple products, video game systems, and LEGOs. The top gaming systems that parents would go to extremes to get for their children were iterations of Xbox, PlayStation, and Nintendo.

Half of parents said they’d preorder something months in advance to ensure they got it for their child. There were plenty of other things they’d also be willing to do. Thirty-one percent said they’d shop at midnight for an online release; 28% said they’d relinquish other gifts in order to get “the one;” 26% said they’d buy from a reseller; 24% said they’d pay more than the retail price; and 23% said they would go to the store in person for a midnight release.

Amazingly, 7% of respondents said they’d resort to bribery, while 5% openly admitted being willing to physically fight another shopper.

Standing in line is part and parcel of the holiday shopping experience. We asked parents how long they’d be willing to wait to get a coveted item. A third of respondents said they’d spend 30 minutes to an hour in line, 25% said less than 30 minutes, and 11% said they weren’t prepared to spend any time in line—presumably because they plan on shopping exclusively online. However, 20% said they’d spend two to three hours in line, and 11% said they’d be willing to wait a whopping four hours or longer.

When it came to the number of gifts parents were planning to buy per child, only 2% weren’t planning on getting anything at all. The majority of parents (29%) intended to buy five gifts or more for each child with two gifts (23%) being the next most popular number. 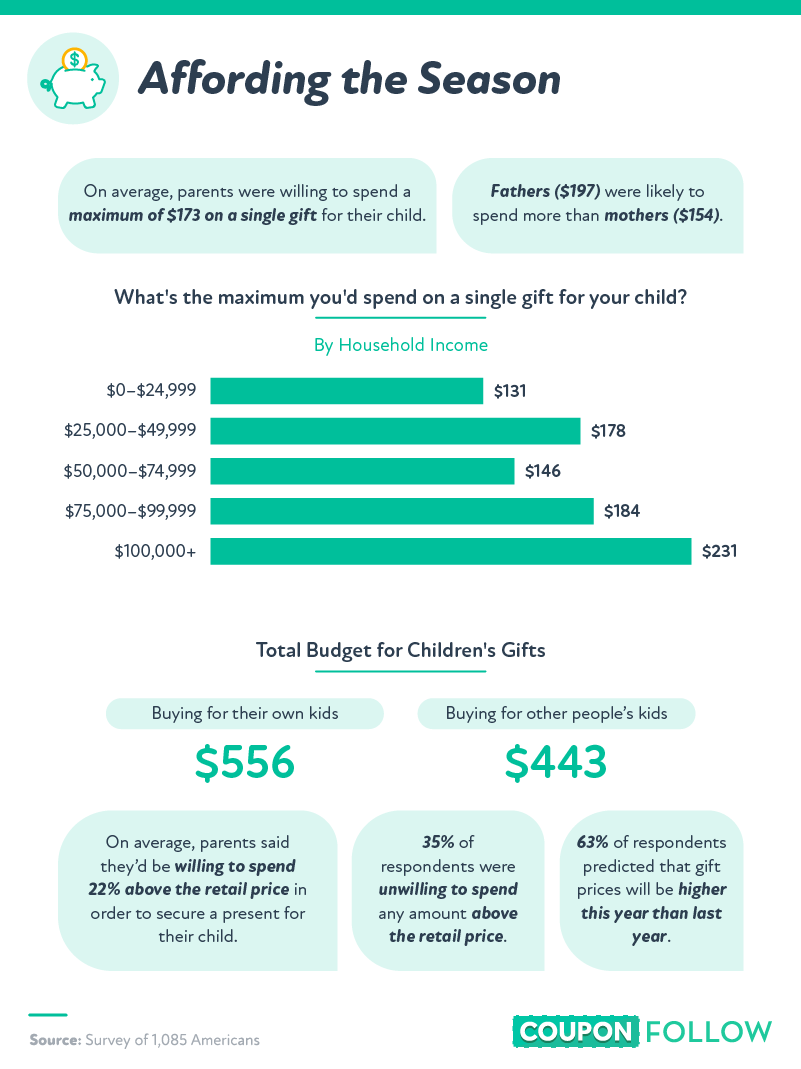 On average, respondents said they’d be willing to spend 22% above retail price in order to secure the perfect gift for their child. However, just over a third of parents were unwilling to spend any amount over retail.

The vast majority of parents (63%) said they were anticipating higher prices this year compared to last year. Conversely, 30% said they expected gift prices to be about the same or were unsure, while an optimistic 8% were anticipating lower prices. When these numbers were broken down by region, 66% of parents in the South anticipated higher prices than last year, compared to 64% in the Midwest, 62% in the West, and 58% in the Northeast.

Finally, we wanted to find out how the pandemic was affecting parents’ holiday plans this year compared to last year. Thirty-seven percent said they weren’t able to be in person last year for holiday events, while twenty one percent are planning on skipping in-person festivities this year. When we asked how likely respondents were to use the holidays to make up for events or activities missed during the pandemic, only 22% said they were very or extremely likely to do so – suggesting COVID consciousness is still very much on the radar for most parents. 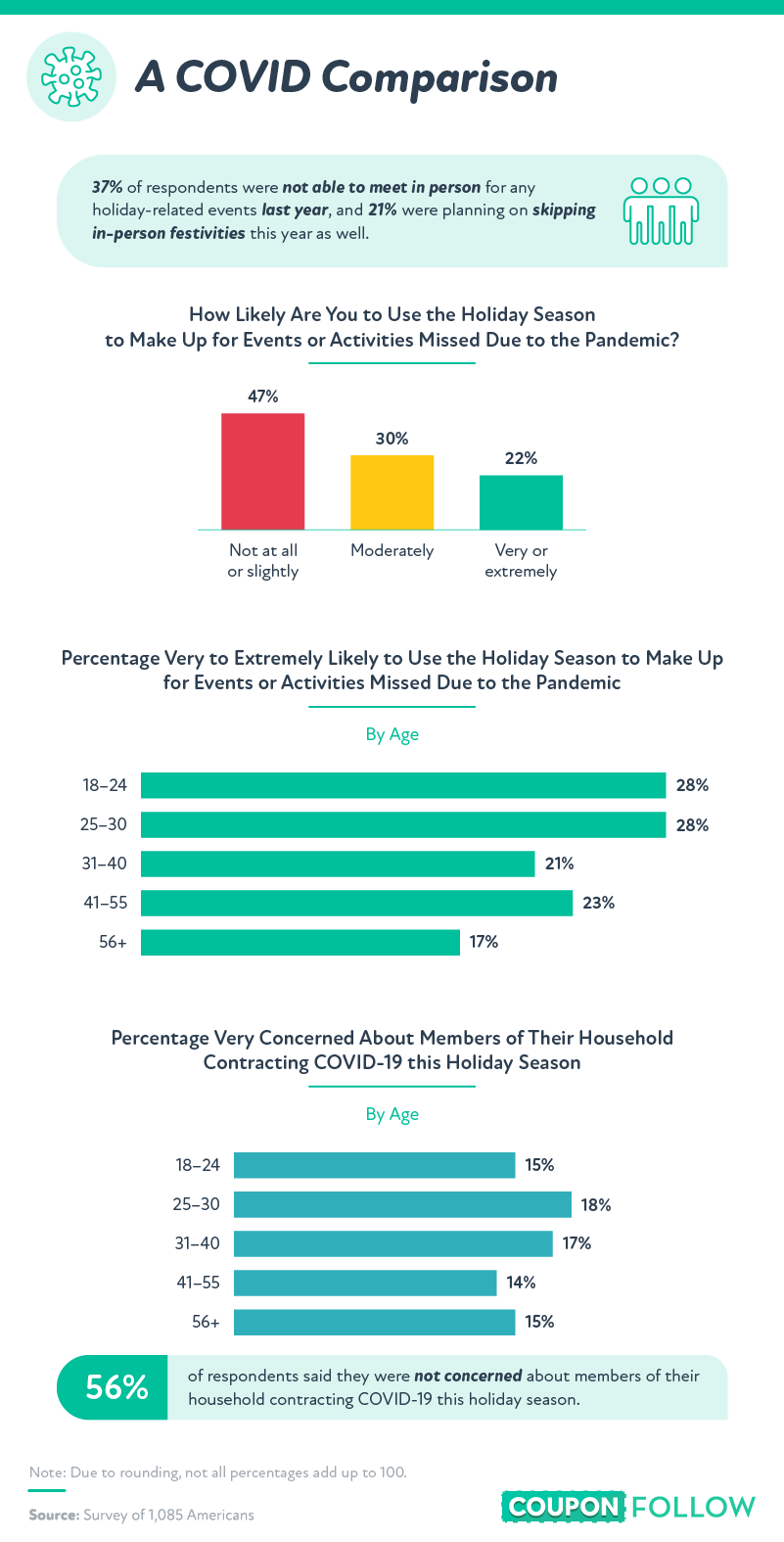 On the other hand, 56% of respondents said they had no concerns about COVID-19 infections in their household this holiday season, and that percentage remained similar when answers were broken down by age group.

Buying gifts for your kids for the holidays can be a fulfilling experience, although most parents have limits as to how far they’ll go to get what their children most want. It seems that the majority would steer clear of the most extreme lengths – such as bribery or physical altercation. However, paying a premium is something that most parents both expect and are willing to do when looking for that coveted toy or gadget.

You don’t always have to pay above the retail price, though. CouponFollow is your one-stop shop for coupon codes from a variety of retailers and companies—whether it’s an online store, an airline, or even cable and internet providers. CouponFollow gives you coupon codes in real time so that you’ll always get the best deals without having to wait in line for hours to do so.

We used SurveyMonkey to collect responses from 1,085 people in the United States. Forty-seven percent of our participants identified as men, and 53% identified as women. Twenty-percent of respondents were over 60 years old; 30% were 45 to 60; 28% were 30 to 44; and 22% were 18 to 29. Those who failed an attention-check question were disqualified.

If you’re interested in furthering the discourse on the lengths that parents will go to get their kids the best gifts for the holidays, you are welcome to share this study online. We just ask that you link back to our findings and make sure that your purposes are noncommercial.