Are Subscription Boxes Worth It? Here's Our Analysis of the ROI

These days, fewer Americans are shopping at brick-and-mortar stores, instead scavenging the web for the best deals and the highest-quality items – an obvious marker of our perplexing digital age. In fact, consumers are spending much less time shopping today than they did some 15 years ago, and those who are interested in learning about new items often opt for subscription boxes in lieu of long trips browsing through store aisles.

These days, savvy shoppers are getting introduced to new foods, makeup, books, perfumes, and even niche collectibles through weekly or monthly subscriptions. The subscription box market is believed to be worth $15 billion, according to recent estimates, and experts only expect that number to grow. To learn more about what’s getting Americans to open their wallets, we surveyed 1,007 consumers in the United States who receive at least one subscription box a month. To learn more about people’s purchasing habits, spending power on these products, and perceived value of these subscriptions – and what it could mean in context of our ever-changing economy – keep reading.

Subscription boxes are no doubt convenient and fun, but some research suggests that there’s also a chemical payoff for buying into them. Opening these boxes are thought to release dopamine, a pleasure molecule, in a way that’s similar to the satisfaction that someone gets when they receive a lot of text messages or when they gamble. 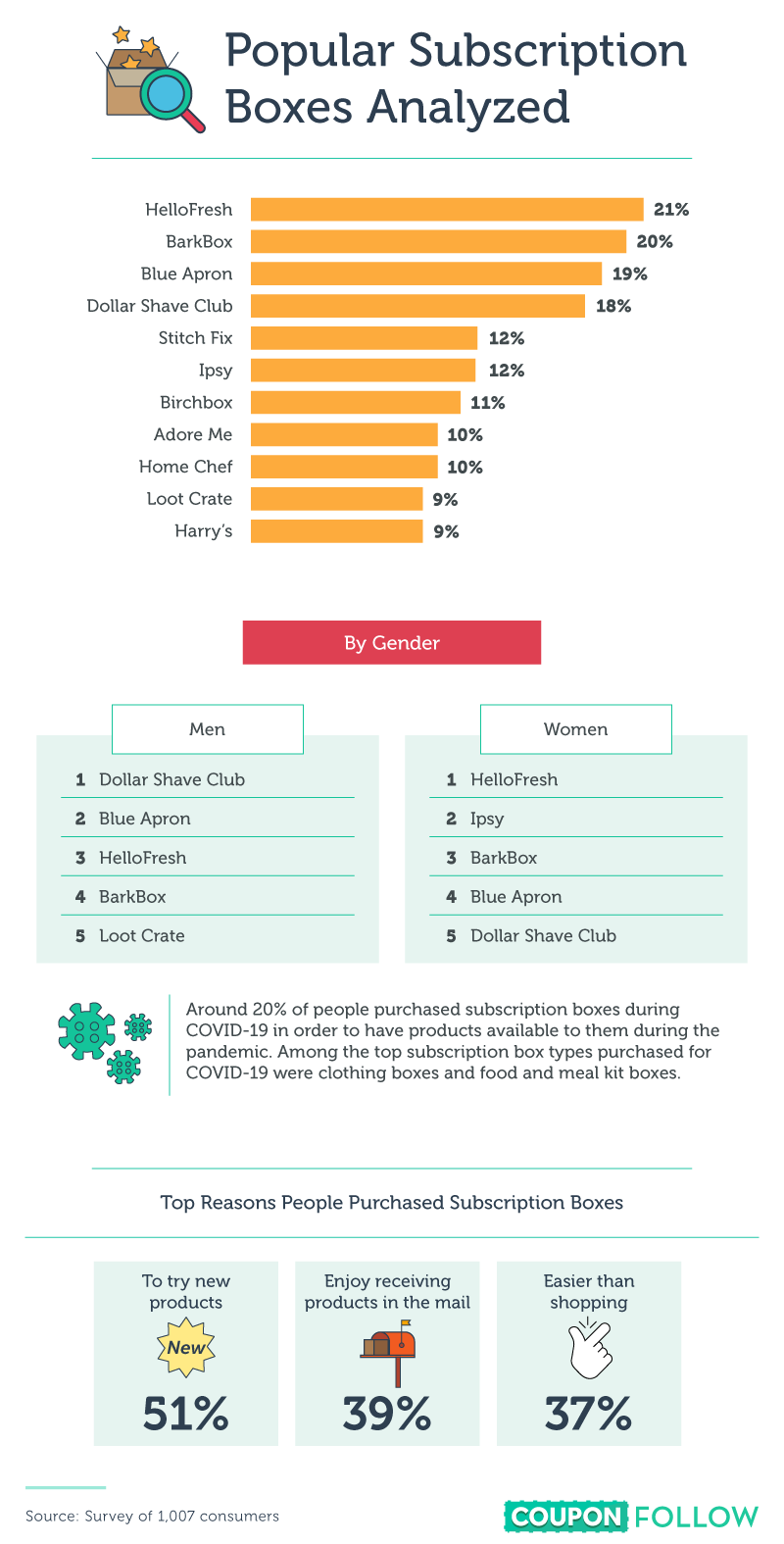 We asked shoppers why they purchased subscription boxes and where they’re spending those precious dollars. Our data suggests that more than half of those surveyed (51%) bought subscription boxes to try new products, while another 39% said they simply enjoy receiving products in the mail. About 37% of our sample found subscription boxes “easier than shopping.”

The most popular subscription boxes were HelloFresh (21%) for meals, BarkBox for dog toys and treats (20%), and Blue Apron (19%), another meal kit delivery service. The Dollar Shave Club was most popular among men, while women subscribed to HelloFresh the most and Ipsy – a makeup and “glam box” delivery service – second most. Meanwhile, in the era of COVID-19, around 20% of people purchased subscription boxes just to have those products available to them during the pandemic, with clothing boxes and meal kit boxes ranking highly.

Subscription box services tend to offer a signup incentive to get customers hooked. At CouponFollow we’ve seen many of the subscription box companies offer discounts to new customers signing up for their service for the first time. Discounting strategies ranged from free months, to dollar or percent discounts, and even doubling boxes. For example, we’ve seen a Blue Apron coupon good for $20 off each of the first 3 boxes for new customers. Other discount strategies we’ve seen were a Barkbox discount to double your first box for free with a multi-month subscription as well as 35% off themed monthly boxes.

Overall, these types of incentive strategies mirror what meal and food delivery companies are doing as well. These companies include DoorDash, Uber Eats, Grubhub and others. They are actively trying to gain market share by offering new or loyal customers extra discounts on their meal purchases. CouponFollow tracks promotions for a variety of food delivery companies and (for just one example) we’ve seen DoorDash promo codes fetch new users $5 off their meal order, or in some instances up to 40% off.

Editor’s Note: For further research and analysis on costs of ordering meals and food, as well as incentives, check out our latest post on Meal Delivery trends.

It’s possible we will see increased competition in the future from larger brands launching their own subscription services. As an example (and purely speculation), Barkbox may eventually face competition from mainstream larger pet food companies, like Chewy.com. While Chewy hasn't directly jumped into subscription boxes per se, it does have a couple different spins on this type of model. They offer an Autoship option which is heavily incentivized - which it taglines "What Your Pet Needs. On Repeat". So while a rotating variety isn’t there, the automatic shipment mechanism is in place. As an incentive, Chewy shoppers can get 35% off Autoship eligible items, plus up to $20 off on their first Autship offer - additionally a variety of first-time customer Chewy promo codes exist which seem to rotate periodically but can fetch up to 40% off.

Chewy also offers the “Chewy Goody Box” which combines themed, and specially curated, pet gift boxes with savings. One could imagine they could potentially combine some of these elements into a competitive subscription box model if they thought it would have a positive ROI on their business.

Perceived Value of the Box

Subscription boxes can often be perceived as “luxurious” or “splurging” because companies are carefully curating what arrives at consumers’ doors every month. But are Americans viewing their subscription boxes that way – and how much are they spending on them each month? 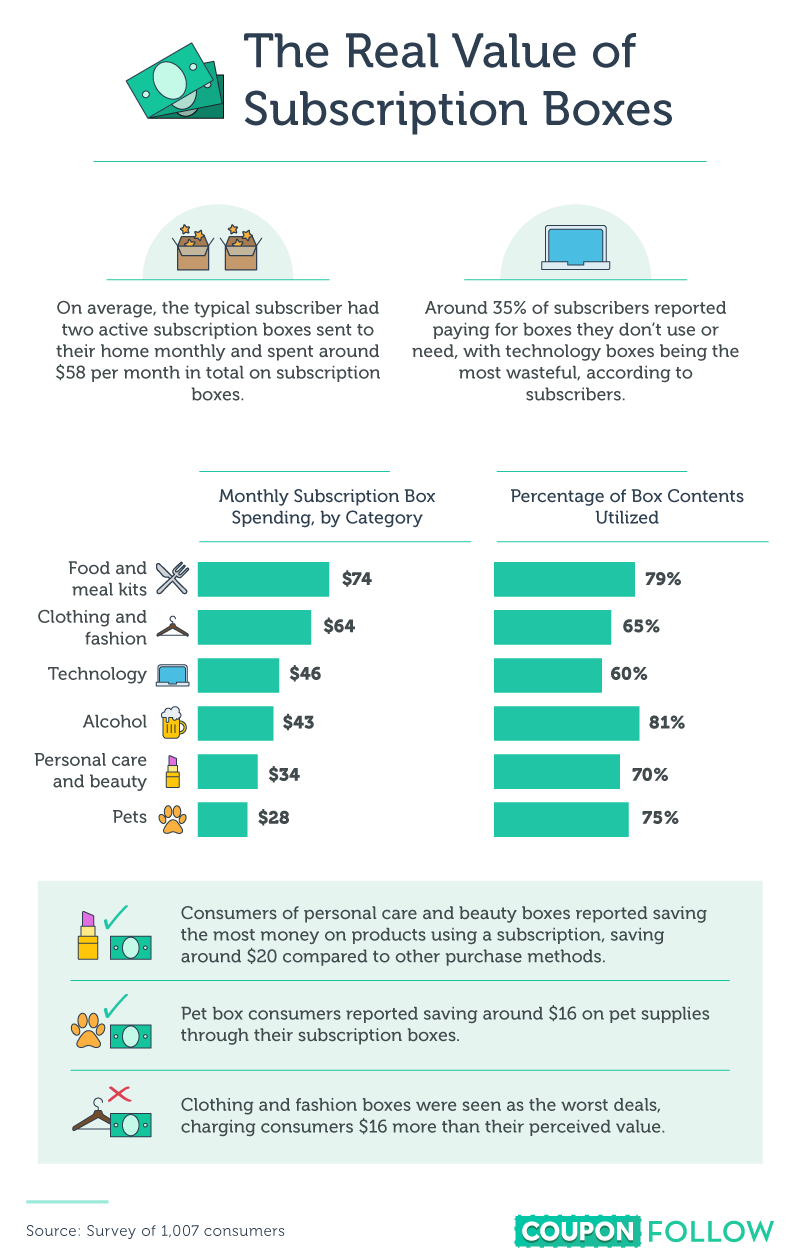 Our survey reveals that, on average, consumers had two active subscription boxes, spending a monthly total of around $58. Interestingly, more than a third of respondents said that they’re paying for boxes they don’t really use or need. These consumers indicated that certain types of subscriptions have a perceived sense of waste, but continued to purchase these boxes in order to try out new products.

People spent the most on food and meal kits, averaging at about $74 a month, but these types of subscriptions were also among the most likely to be used (79% of subscribers reported using these kits). Alcohol subscription boxes – which averaged $43 in spending a month – were also very likely to be used (81%). Meanwhile, those that had clothing or fashion subscriptions spent an average of $64 a month, but only 65% of consumers said they actually used them. The most wasteful of all subscriptions, however, were those related to technology. For these boxes, people spent an average of $46 a month, but only 60% of subscribers said they wound up using these products.

Here’s a money-saving tip for conscious shoppers: Our data suggest that consumers of personal care and beauty boxes reported saving the most money on their products, at around $20 per month compared to other purchasing methods. Pet box consumers also reported high savings by subscribing to boxes, while clothing and fashion boxes were the worst perceived deals.

In general, those interested in consumer trends tend to analyze shoppers by their demographics in order to understand them. For that reason, we asked more than 1,000 shoppers of different ages and genders about their spending habits on subscription boxes. 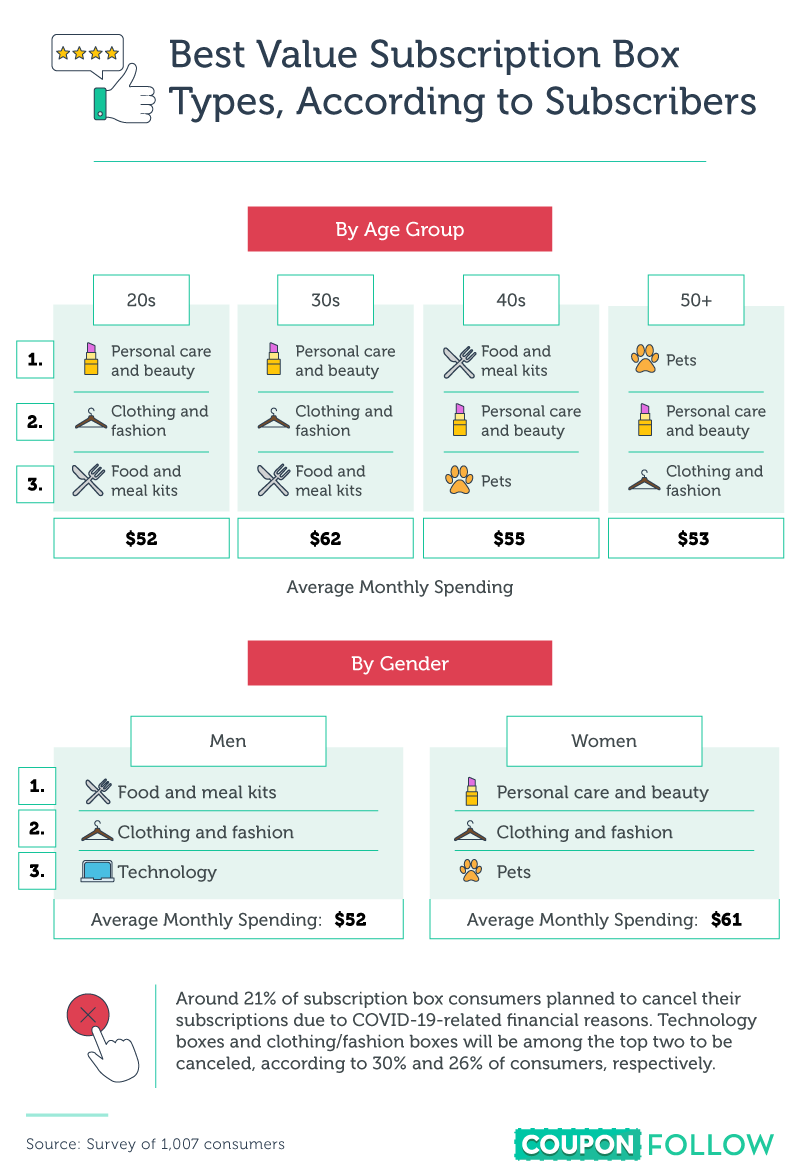 This information could no doubt help companies better tailor to their target consumers, especially in the era of the novel coronavirus, when budgets are getting increasingly tight for millions of people. Around 21% of subscription box consumers surveyed said they plan to cancel their boxes due to financial struggles caused by COVID-19, and technology boxes or clothing and fashion boxes appeared the most likely to go.

Subscriptions and the Future

With millions of Americans filing for unemployment in face of COVID-19, it’s unclear what the future of the subscription box market may look like. However, tight wallets mean that consumers might be looking for good deals, and our survey of more than 1,000 shoppers in the U.S. suggests that some are indeed saving money by subscribing to these services.

As more Americans look to couponing and deals to stretch their money further, CouponFollow offers real-time, up-to-date coupons from a ton of brands, including subscription boxes for popular meal kits. To save money on your favorite subscription box or to hunt for the best deals, browse CouponFollow.com and for the best deals and discounts from all of your favorite brands.

We surveyed 1,007 American consumers who are subscribed to at least one subscription box in order to explore subscription box purchasing habits, perceived value, and the cost of these products. Around 51% of our respondents were men, and 49% were women, and ages of our respondents ranged from 18 to 78 with a mean age of 35 and standard deviation of 11 years. Survey data include certain limitations due to self-reporting, including exaggeration, selective memory and telescoping. Data were not weighted, and no statistical testing was provided to support the hypothesis. This was an exploratory study on the usefulness and enjoyment of subscription boxes across various categories.

Want to help your friends find the perfect subscription box? Feel free to share our story for noncommercial purposes only, but link back to our study to give us some credit! 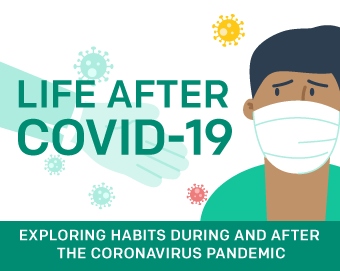 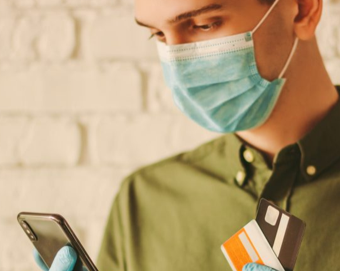 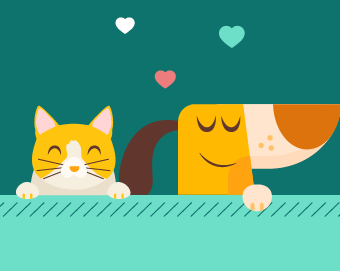 blog posts
Cost of Companionship: Pet Spending in the US