In light of the COVID-19 pandemic, 2020 has become a year of “new normals” for Americans everywhere. Across the country, people are adjusting to life working from home, life without conventional child care options, and ongoing social distancing measures that have impacted their daily routines.

Among the many changes Americans are experiencing are major fluctuations in their spending patterns. Money spent on entertainment and travel may be down in 2020, but spending in other categories (including education, home, and food) have increased substantially. While millions are still out of work, these new budget constraints can amount to a tremendous strain for the employed and unemployed alike.

So with these new spending habits, how are Americans thinking about being frugal in their spending? To find out, we surveyed over 1,200 people about their penny pinching ways, and how that may have changed in 2020 during the pandemic recession. Read on as we explore how many people consider themselves frugal, which elements of their spending they’re the most conscious of, and what the biggest advantages of adopting a frugal mindset during COVID-19 can be.

To start, we looked at the overall prevalence of frugality, and specific areas where Americans are most thrifty.

Among the more than 1,200 people polled, 78% identified themselves as frugal. Although a majority of respondents considered their spending habits generally frugal, we found that title didn’t apply to every aspect of their spending. Instead, clothing purchases (70%), food and beverages (56%), and entertainment (52%) were the most thrifty categories, on average. Particularly during the COVID-19 pandemic, with so many people working and learning from home, clothing sales have been down by as much as 50% in 2020.

Even if they didn’t exactly consider themselves frugal, 88% of respondents agreed frugality is a good characteristic in spending and saving. When asked which purchases shoppers should be the most conservative with in their spending, 77% recommended being frugal with packing lunches for work or school, followed by primarily eating home-cooked meals (76%) and budgeting in general (75%). Sixty-seven percent of Americans recommended using coupons and discount codes while shopping.

Most notably, 72% of respondents believed being “cheap” had worse connotations than being frugal. More than being a savvy spender, 30% believed watering down household products was cheap, followed by packing lunches for work or school (30%) and watering down their beverages (28%). Just 21% of people considered getting the most out of everything a cheap behavior.

We learned that frugality is widespread, but is it worth it? We asked some questions to find out.

Many of those surveyed acknowledged they don’t apply the same level of frugality to all of their spending behaviors, but a majority agreed on the key benefits of pinching pennies here and there. Above all, 84% of respondents acknowledged being frugal helped them save money in general, prevented financial waste (61%), enabled larger future purchases (51%), and helped them prioritize their spending (46%).

Many self-identified frugal Americans were also more satisfied with various aspects of their life, on average. Compared to 65% of non-frugal spenders, 73% of conservative spenders were happy with their life overall. Prudent spenders were also more satisfied with their lifestyles, future outlooks, achievements, romance, and finances compared to non-frugal spenders. For thrifty respondents, a positive perspective may also be attributed to their higher likelihood of identifying as having clear financial goals, financial stability, and the capability of setting (and sticking to) a budget.

Respondents who indicated not being frugal with their money had a $6,000 higher household income, on average. Not only did non-frugal spenders have an additional $1,400 in credit card debt, on average, and nearly $5,000 less in savings and checking, they also spent more of their income on nonessential purchases and invested less, on average.

When Couples Disagree on How to Spend (or Save)

For many of us, frugality is more than a personal choice. In the following section, we explore how frugality and relationships intersect. 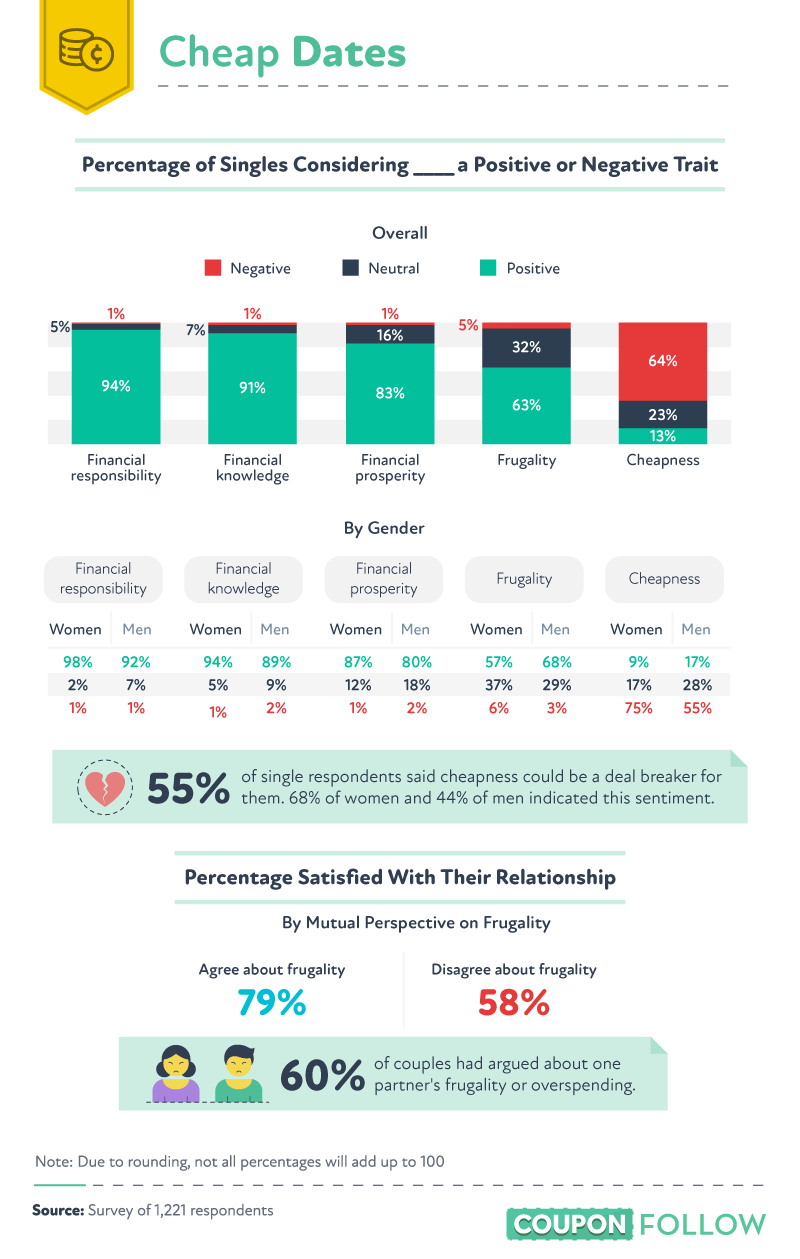 Frugal spenders were more likely to be satisfied with many aspects of their life, but that happiness may depend on aligned spending habits for couples.

Just 58% of people who disagreed on the idea of frugality identified as being content with their relationships, compared to 79% of people who had the same opinions on spending. Another 60% of couples also admitted to arguing about their partner’s frugality or overspending.

Among singles, 64% of respondents considered “cheapness” a negative trait in a partner but didn’t hold the same impression of frugality. Sixty-three percent of singles valued frugality in others and felt even better about financial prosperity (83%), financial knowledge (91%), and financial responsibility (94%). Women (75%) were more likely than men (55%) to consider cheapness a negative trait and 11 percentage points less likely to value frugality in a partner. In contrast, women surveyed were also slightly more likely to feel positively toward financial prosperity, knowledge, and responsibility. 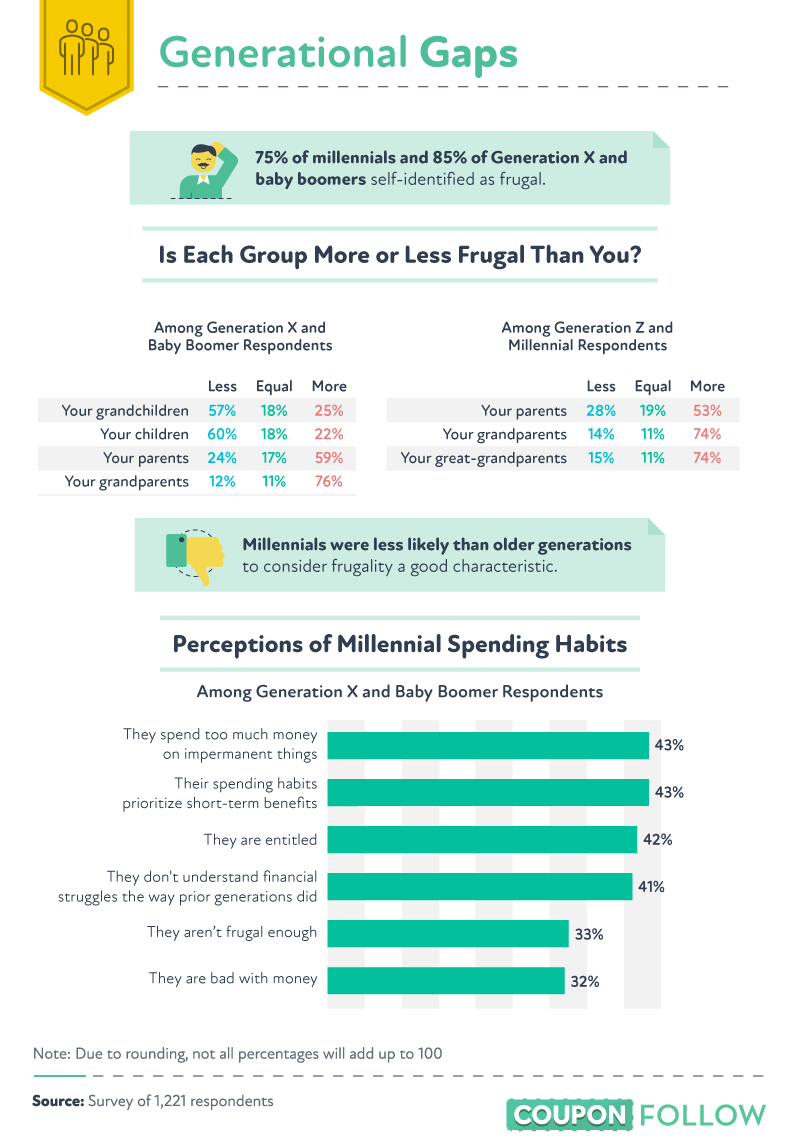 Younger generations of workers are among the most likely to be negatively impacted by the pandemic recession, but that may not directly correlate into a higher likelihood of frugality.

2020 has changed the way millions of Americans are spending money, forcing many to reevaluate their budgets to make room for new expenses and long-term adjustments to spending more time at home than ever before. Not to be confused with being “cheap,” we found a majority of spenders consider themselves frugal to some capacity, and many of those surveyed also indicated being happier for the change. From eating in instead of going out to using coupons and discount codes while shopping, frugal spenders earned less money, on average, but had more in savings and investments as well.

At CouponFollow, we make smart spending easy by making sure you have access to the best coupon codes for all your shopping needs. With instant access to codes other websites simply can’t offer, we’ve helped customers save over $4 million between all of their favorite retailers. With our browser extension, finding the best codes is a simple click away, and you never have to worry about overspending again. Start saving now and embrace your frugal ways at CouponFollow.com today!

We surveyed 1,221 respondents using the Amazon MTurk platform. Our respondents ranged in age from 18 to 72 with an average age of approximately 37 years old. In order to help ensure accurate responses, all respondents were required to identify and correctly respond to a decoyed attention-check question.

In some cases, questions and answers have been paraphrased or rephrased for clarity or brevity. These data rely on self-reporting, and potential issues with self-reported data include telescoping, selective memory, and attribution errors.

Saving money shouldn’t be controversial, especially in today’s society. Help quell the stigma around frugality by sharing the results of this study with your readers for any noncommercial use. We simply ask that you include a link back to this page in your story as credit to our team of contributors for their work.