How Much Is a Vacation Worth to You?

When the COVID-19 pandemic hit, domestic and international travel became difficult, if not impossible, with travel restrictions, quarantines, and lockdowns interrupting many Americans’ vacation plans. Now that restrictions have eased and the world feels safer, the 2022 travel trend is to go big and spend big. Many Americans are now ready to make up for lost time and experiences.

To help travelers find the best deals, we determined which U.S. airports were the most affordable to travel from by averaging the cost of one-way and round-trip tickets. We also compared current prices to pre-pandemic costs. Read on to find out where the lowest fares are right now and where Americans plan to go on their long overdue journeys.

The Cost of a Flight

So far, flying has been much more expensive for Americans in some locations across the country in 2022. Those who flew out of states like Alaska, Wyoming, and North Dakota faced much higher prices for airfare than those traveling from Delaware, New Jersey, or Ohio.

Distance didn’t seem to be the main factor affecting current costs. Far-flung Alaska was the most expensive state to fly from, but Hawaii – over 2,000 miles from the West Coast – was the fourth most affordable. Popularity might have affected flight affordability more than distance.

According to Newsweek, Hawaii boasts four of the top 10 American travel destinations. And while Alaska has its fair share of breathtaking scenery, the climate isn’t nearly as inviting year-round. That’s not to say that the most expensive states to fly from don’t have worthy attractions – Wyoming is home to much of Yellowstone, America’s first national park and a popular tourist destination.

Volume was another factor that didn’t necessarily drive prices down; Georgia and Colorado were home to two of the top three busiest airports in the world, according to a recent Airports Council International report. Yet both states were among the top 10 most expensive to fly from. Those looking to travel by plane to and from the more costly states may need to keep a budget in mind. High plane ticket expenses means either having a bigger travel budget or less money to spend on other parts of a trip.

How Have Flight Prices Really Changed?

Americans traveling earlier this year may have found that flight prices were lower than pre-pandemic levels. We observed that in the first quarter of 2022, prices were actually down at 50 of the 60 most popular airports in America since 2019.

Surprisingly, many recent flights from the most popular airports have decreased in price. Most travelers paid less for the average ticket than they did three years ago, except for those flying from Portland International Airport (PDX) and a handful of other airports with increases of less than 3%. Major international airports like New York’s La Guardia (LGA), New Jersey’s Newark (EWR), and Florida’s Miami (MIA) showed savings of over 16% compared to 2019. Travelers using these airports saved big so far this year.

While the Bureau of Transportation Statistics numbers were favorable, they only ran through the end of March 2022. So, these savings might be short-lived as flight prices could continue to rise throughout the rest of the year. The Los Angeles Times reported that average flights in June through August have increased over 30% from 2019 levels during the same time. Travelers flying this summer might see higher prices in some locations. They might also find many airlines short on staff, leading to inconvenient flight delays or cancellations which can ruin travel plans.

Where and How Americans Are Traveling in 2022

Americans were keen to travel in 2022, whether by plane, train, or automobile. After the COVID-19 pandemic restricted travel, especially to international destinations, many are now ready to make up for experiences they missed during the past few years. 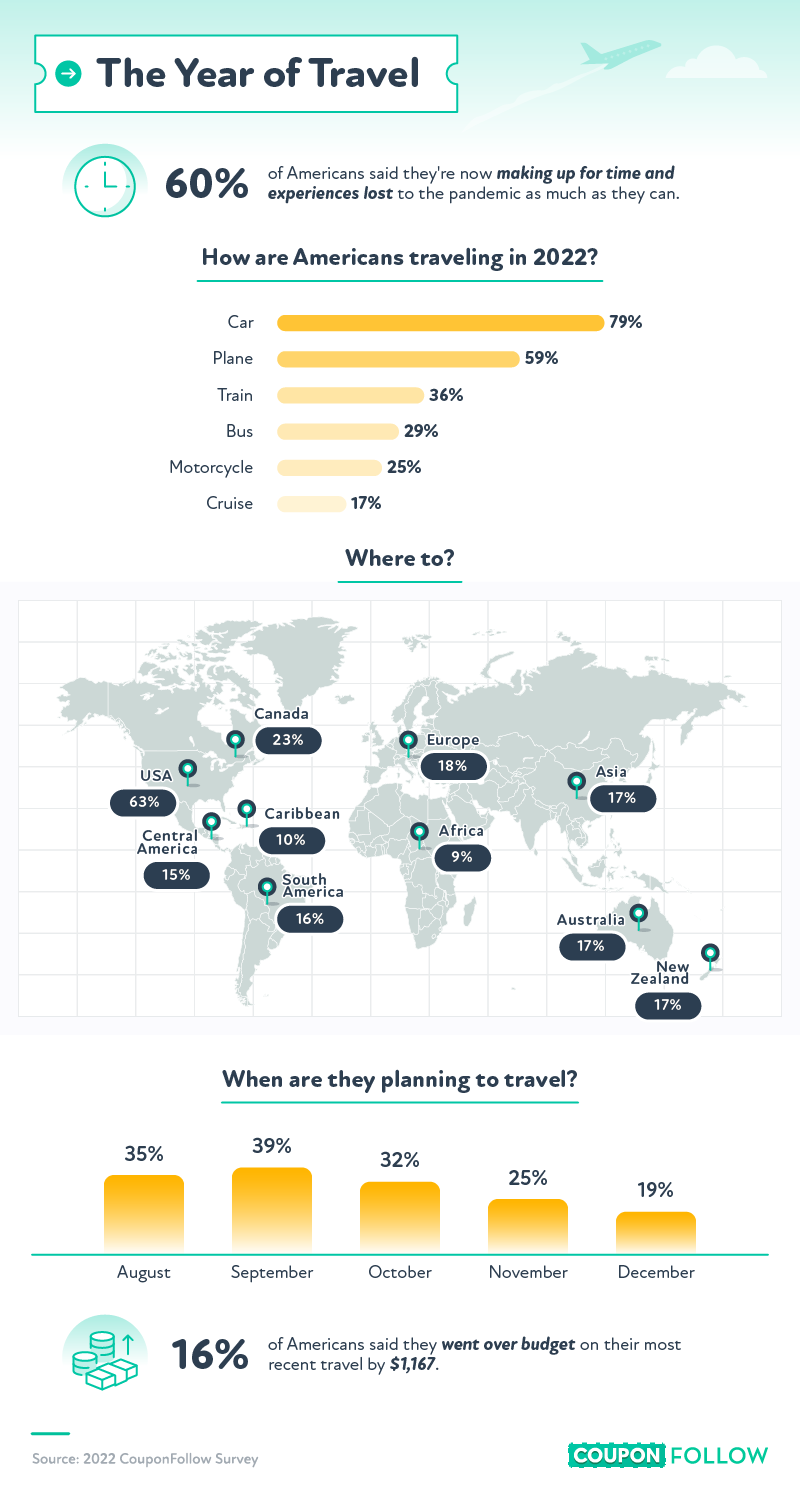 Americans were most likely to travel by car (79%) or plane (59%), which are greatly affected by gas price fluctuations. While gas prices reached record highs earlier this year, they dropped in July, making road trips and flights more affordable. The cost reduction could also have affected other forms of travel pricing, from motorcycles to buses and even cruises. If gas prices continue to trend downwards, travelers may see a marked decrease in transportation expenses later this year.

That could time out perfectly since traveling in the off-season is often much more affordable than peak-season travel. American travelers appeared to be quite budget-savvy lately: For our respondents, August and September were the most popular months to travel, followed closely by October. Over 60% planned to travel within the country, but the top two international destinations were Canada and Europe. Some countries may still have travel restrictions, so be sure to check the most current requirements for entry closer to departure.

Travel costs were up across the board for Americans in 2022 as inflation continued to climb to over 9% in June. With the rising cost of goods, Americans faced an uphill battle to save money, making traveling more difficult. 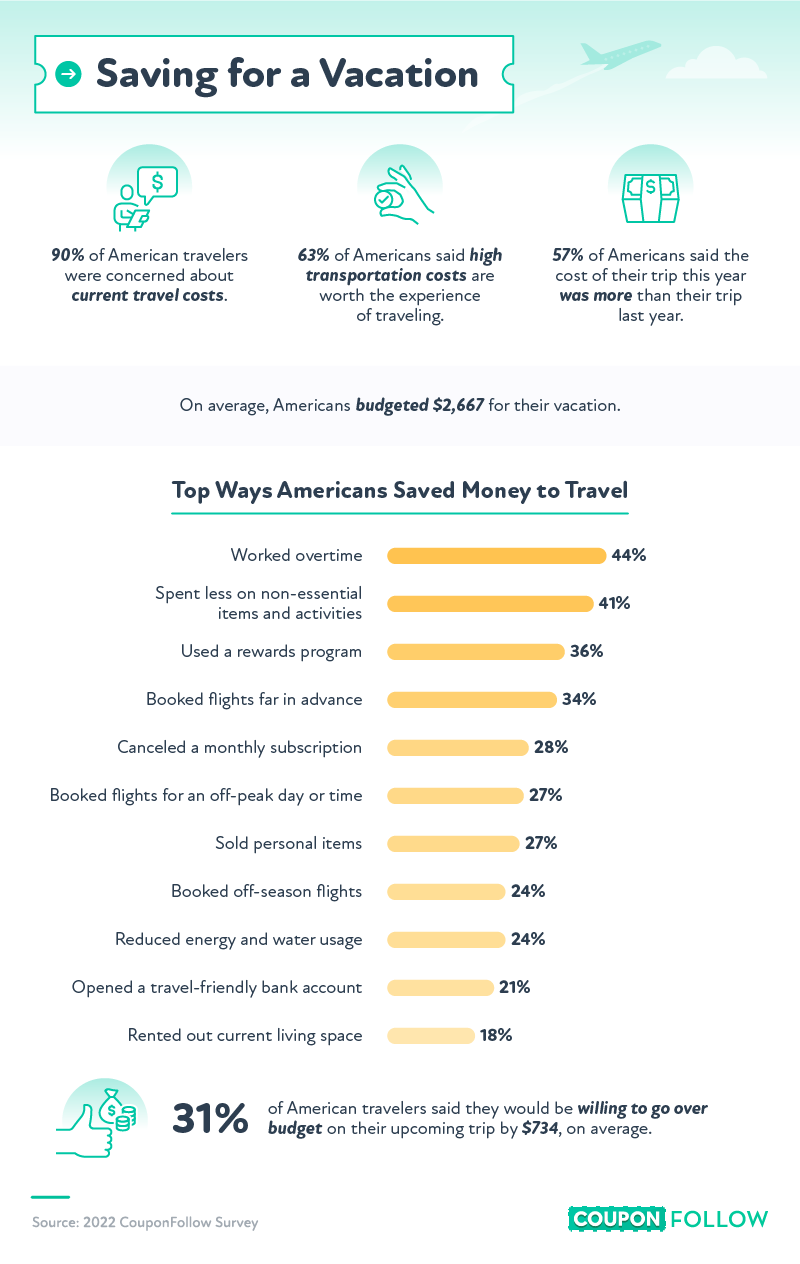 Budgeting for a vacation was a big concern for Americans: 90% worried about travel costs in 2022. As of June, the Travel Price Index in the U.S. was up 21% since 2019 and 17% since 2021. This index measures the costs of various travel expenditures such as airline fares, fuel, recreation, and lodging.

Despite inflation, people still wanted to travel: over 60% of Americans said the experience was worth the inflated costs. Some were even willing to go beyond their budgets for the sake of the experience. More than 30% of respondents were willing to overspend more than $700 on an upcoming trip.

Americans who still wished to travel despite the high costs found creative ways to save or make more money. Over half of those who traveled this year reported that their trips cost more than last year. The top strategy for saving was working overtime, followed closely by cutting spending on non-essential items and activities before their trips. Some even took more extreme measures: More than 25% of Americans sold personal items to fund their vacations.

Are You Ready to Travel?

Americans can save big on travel if they practice a few tips while planning. You can enjoy a more affordable trip by purchasing tickets far in advance and traveling during off-peak times and in the off-season. Rewards programs, coupon codes, and other special offers are some other great money-saving options. It’s also helpful to create a budget and cut costs at home before going on an adventure. Americans have had plenty of time to “staycation” over the last few years, and now it’s time to get out and explore. Where are you off to next?

CouponFollow surveyed 1,000 Americans about their travel in 2022. They ranged in age from 20 to 81; 55% of those surveyed were men, and 45% were women. We also collected and analyzed the Average Domestic Airline Itinerary Fares data from the Bureau of Transportation Statistics (BTS) from the year 2000 to the first quarter of 2022.

CouponFollow ensures that you can get the best price at the stores you love in seconds. CouponFollow uncovers, screens, and tests countless coupon codes and offers them in one easy-to-use free place.

If you enjoyed reading our study on the state of American travel, please feel free to share for non-commercial use. Just be sure to link back to this page so our research team can receive credit for their work.