Employees Are Dressing Different: Analysis of Wardrobe Changes Since COVID-19

Young professionals are often inundated with the notion that you must dress for the job you want, not the job you have, which assumes that professional attire actually plays a huge role in your future success. But then when we look at some of the most successful people in the world, they seem to have a different approach. Mark Zuckerberg insists that wearing the same casual outfit every day makes him better able to focus, while Richard Branson completely rejects the idea of neckties and formality. And since much of the world started working remotely, this casual approach has been easier to access.

Without an office, school, or work site to go to, many have been rethinking what they want to (or have to) wear to work. Should they maintain a professional appearance or start to dress down? Not only did we survey more than 1,000 remote workers to find out, we also compared their answers to a similar study done before COVID-19 brought us all home. Respondents shared how much they’ve spent on remote work attire, as well as what they typically wear each day. Most importantly, we compared their outfit choices against their productivity levels. If you’re curious how your own pandemic wardrobe might be impacting your professional life, keep scrolling.

Nearly 7 in 10 employees in the U.S. today work remotely, or away from an office or work site. Without in-person supervisors and co-workers, there’s essentially little to no way to enforce a dress code at all, and employees are left up to their own devices. The first part of this study compares work wardrobes “then and now,” or before and during the pandemic of 2020. 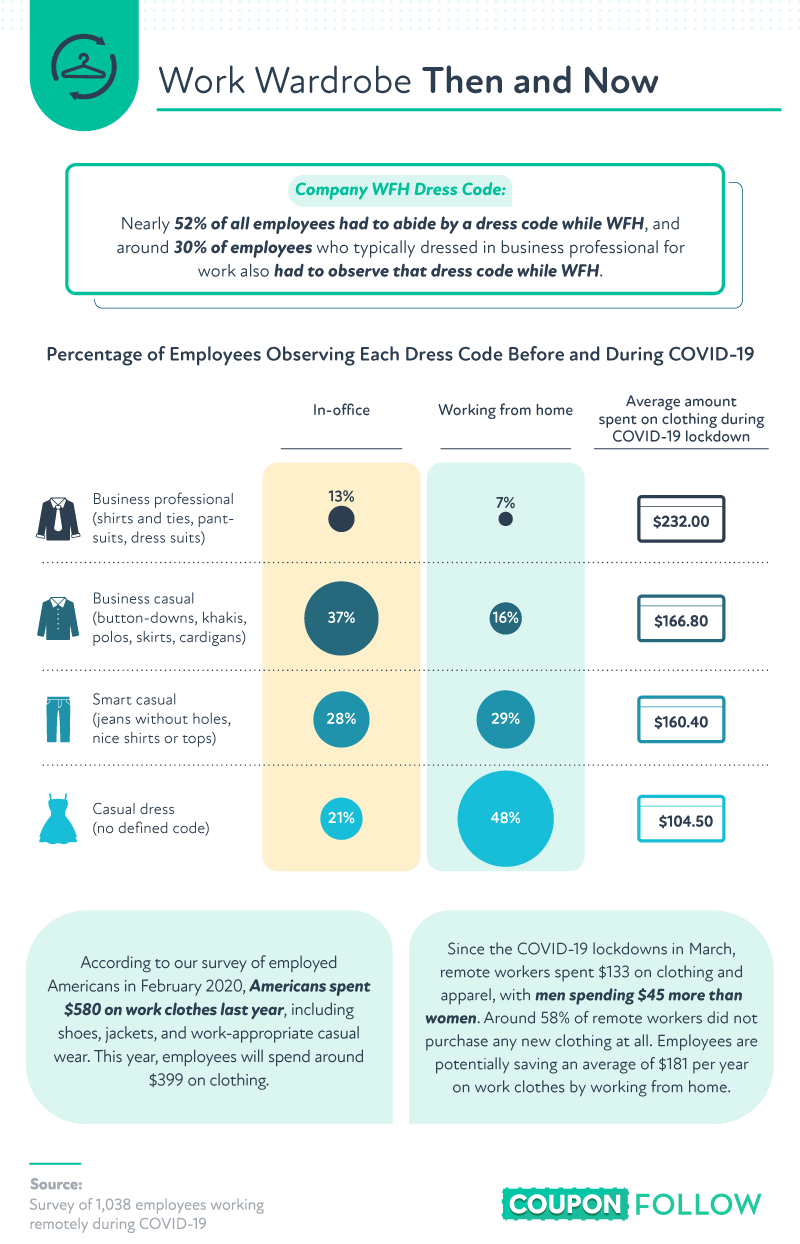 Though it may be difficult to enforce, some employers expressed a desire for a WFH dress code, even if it’s only observed for video calls. In fact, more than half of respondents – 52% – told us they were still required to abide by some form of a dress code they had before COVID-19 hit. Even 30% of those who previously had a business professional dress requirement (which we typically think of as skirts and pantsuits with heels for women and blazers for men) still had to dress this way at home. Business professional attire was previously shown to cost employees $139 every month when in the office, but when these business professionals went remote this March, their work-appropriate attire only cost them around $58 a month. Those who had casual dress codes at work spent around $104 since the COVID-19 lockdowns began, averaging around $25 per month. And though WFH clothing purchases were more inexpensive than typical office attire, a significant number of employees (58%) decided to take a frugal approach to their new WFH status and purchased no clothing at all since the lockdown started.

Regardless of specific dress code, it did appear that employers were becoming more lenient with their requirements. Before COVID-19, only 21% of offices permitted casual dress (a lack of dress code), while nearly half of employers allowed casual dress codes for WFH employees. In fact, casual dress is now the most common dress code for employees. And while 37% of employers required employees to dress in business casual before (button-downs, khakis, polos, skirts, and cardigans), only 16% required it now. By our calculations, these pared down requirements could save employees $181 dollars every year, and perhaps even more for men who spent an extra $45 on attire since COVID-19’s onset.

For those who are visual learners, this next part of our study will suit you well – pun intended. We asked each respondent to get a little more specific than just dress code and to share with us exactly what they wore on a typical day at (remote) work. We were then able to create an average outfit based on the most common responses. 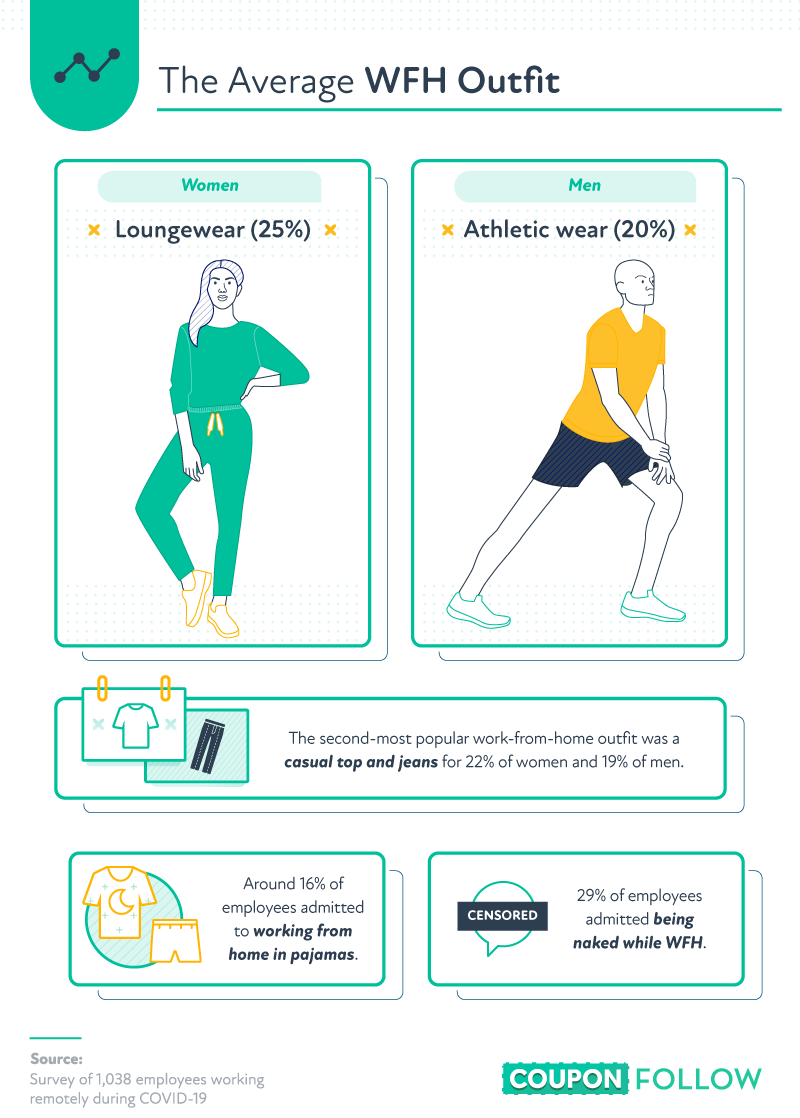 “Netflix and chill” may have started the loungewear trend, but remote work cemented it. A quarter of all women wore this category to work every single day, and the corresponding market is expected to grow by $19.5 billion in the next four years. Even Merriam-Webster defines loungewear as one that is specifically intended to be worn at home, though it’s perfectly normal to take the look outside the house today. Sixteen percent of employees took it a step further and just wore their pajamas while working from home. This sounds casual until you learn that a whopping 29% of employees have recently worked naked while WFH.

Men usually opted for athletic wear, another market on the rise. Though highly comfortable, athletic wear is designed with sweat and movement in mind, which isn’t what one normally associates with a desk job. That said, very little of 2020 has been considered normal. Men and women both often opted for a casual top and jeans, though nudity was much more common across all respondents. If ever there was a time to try it out, it’s now.

The typical morning routine fluctuated for employees when we asked them what time of the day they typically did activities associated with getting ready for work. Having a video call on your schedule could be a real game-changer. For video calls specifically, 22% changed out of their pajamas, and 32% combed or brushed their hair. If a female respondent had a video call that day, 22% put on a bra, and 41% put on makeup. Thankfully, the majority of employees were still brushing their teeth (66%) and taking a shower (57%) before the workday started, but there’s still clear room for improvement in those areas. 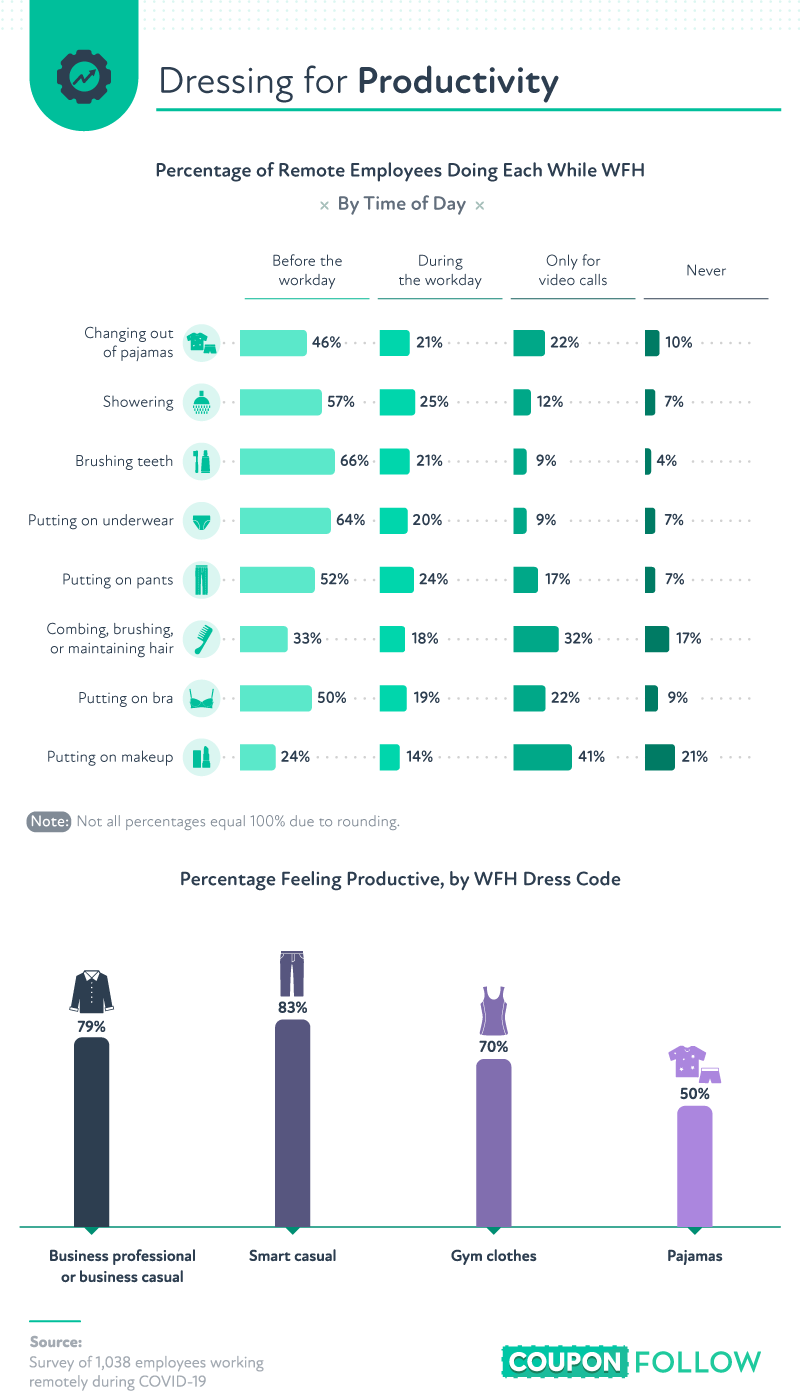 In perhaps the most crucial part of our study, respondents were asked to share how productive they felt while working from home. We then crossed this information against their reported outfits and noticed a few interesting trends.

Business professional, business casual, and smart casual dressers all reported higher levels of productivity than those who dressed in gym clothes and pajamas. Roughly 80% of the more formal dressers said they felt productive throughout the day, compared to just 70% of those in gym clothes and 50% of those in pajamas. Previous studies have shown that more formal dressing can lead to better abstract thinking, while others have suggested that more casual attire is beneficial to concentration. But neither of these studies were focused on remote work, which evidently is best suited for smart casual dress, consisting of nicer-than-usual streetwear, as defined in the first analysis of the study.

The last portion of our study asked respondents to share exactly how they felt about the dress requirements within their company. Did they feel it was necessary, somewhat necessary, or not at all? These answers fluctuated by industry, but overall our study revealed that dress codes are really only deemed necessary by around a third of all employees. 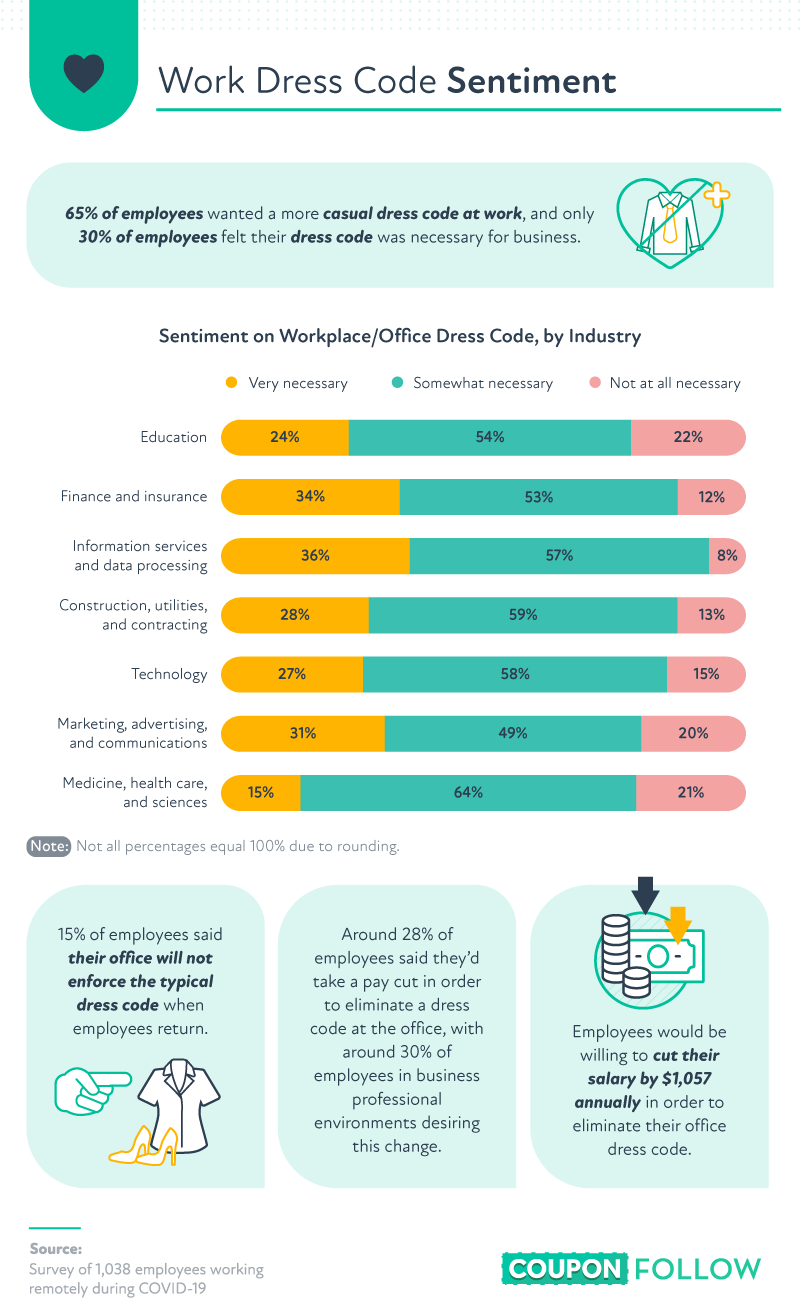 In spite of the productivity boosts we saw in correlation with more professional attire, the vast majority were still hoping for a dressed-down dress code. Sixty-five percent wanted a more casual dress code than the one they currently had, and only 30% agreed that any dress code at all was necessary for business. Twenty-eight percent were even willing to endure an average pay cut of $1,057 annually to see the dress code eliminated. That said, certain industries diverged from this sentiment more than others.

Information services and data processing, which currently describes the industry of 3.9 million U.S. workers, most vehemently clung to their dress code, often describing it as very or somewhat important to their jobs. In spite of COVID-19, data processing services have actually been in high demand, as services like Netflix rely on data-backed information in order to flourish. Recalling that polished wardrobes often lead to higher levels of productivity, perhaps the information services sector is onto something.

Those that valued dress code the least were also arguably hardest hit by the pandemic. The education field had the most employees (22%) agreeing that the dress code simply didn’t matter in order to get the job done. Perhaps educators would have felt their attire to be more important when classes were actually happening in-person, but now that record numbers of children are not in school, they’re feeling less strict. It’s also important to note that their “clients” are often children, and increasing their productivity isn’t necessarily the number one goal for a teacher, as it may be for a typical boss.

Dressing to Impress and Decompress

Respondents ultimately disagreed with the argument the data made. In spite of the productivity respondents showed when they took the time to dress up, they still stood staunchly against the imposition of a dress code. Many were even willing to accept a smaller paycheck to see the dress code abolished. They were also enjoying athletic clothes and loungewear during their remote work hours and typically hoped things would stay that way.

Outside the scope of this survey, but in our other research we've found Ann Taylor, Banana Republic, Express, H&M, J Crew Factory, Uniqlo, Urban Outfitters, and Zara were all popular destinations people recommended for picking up items for their work wardrobe. In recent times, due to work from home other brands and retailers that sell comfort-wear have also gained popularity as well as athleisure brand Lululemon.

Dressing on a Budget

Perhaps one of the main reasons respondents shied away from dress codes were the price tags that correlated with increasingly professional attire. If you plan to shop, you can often find a 15% off Express coupon on your purchase which usually is sitewide but requires a minimum purchase spend. Express also often runs sales and if you find items on clearance you’re looking at up to 60% off.

Forever 21 has a Women's Workwear section that has over a 100 products, may on sale and some available to use Forever 21 promo codes, which can score discounts of up to 50% off on select styles (look for products marked with a red circle, example shown above). Additionally they usually run free shipping on $50 or more and 20% promotions for new members.

If cost is your main barrier as well, CouponFollow may be of service. Whether you’re looking for loungewear or a corporate-looking suit, there are plenty of discounts to be had. Instead of accepting a pay cut, start with CouponFollow and see if your most productive outfits yet can be found at a fraction of the price.

We surveyed 1,038 employees who typically worked in an office or workspace but were working from home during COVID-19. Survey participants ranged in age from 18 to 77, with an average age of 37 and a standard deviation of 11 years. Around 49% of participants were female, and 51% were male. We also used a survey study executed in February of 2020 of 1,004 employees in order to explore how much employees spent on their work wardrobes before the COVID-19 lockdown. Survey results have certain limitations due to self-reporting, which include, but are not limited to, telescoping, exaggeration, and selective memory. We did not weight our data or statistically test our hypotheses as this was a purely exploratory look at wardrobe preferences while working remotely.

Feeling inspired to rethink your work wardrobe, even from home? You’re likely not alone. You’re welcome to share the findings of this study with whomever may benefit from it, but you must be sure your purposes are noncommercial and that you link back to this page. This way, its contributors can receive proper credit for their work.