Assessing the Barriers to Crypto Investment

Given that in 2021, over 100 million people around the world were using cryptocurrency, it’s safe to say that the digital dollar has become a widely accepted way of spending and saving. However, despite the recent explosion in public awareness of crypto, many are skeptical about its long-term legitimacy.

Skeptics have voiced concerns ranging from cryptocurrency’s unstable value and limited uses to its outsized environmental impact. To learn more about hesitations toward crypto investment, we surveyed 1,172 people who haven’t bought in. Read on to find out what specifically is holding them back and what, if anything, would entice them to take the leap and start filling their digital wallets.

While Bitcoin has actually existed for over a decade, it’s only skyrocketed in notoriety, and consequently in value, over the last handful of years. As more people become interested in what the digital dollar is all about, they naturally turn to the internet for answers. 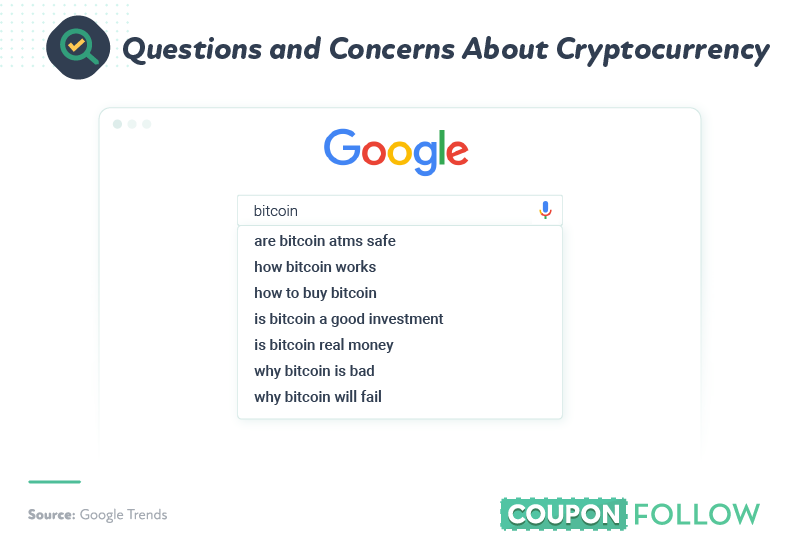 The Google Search graphic above shows some of the most common questions and concerns that people have relating to cryptocurrency, and more specifically Bitcoin (the most well-known and frequently traded coin). Clearly, many people are still very unclear about the basics of cryptocurrency, prompting frequent questions about how the technology works and whether it has true staying power in the modern economy. 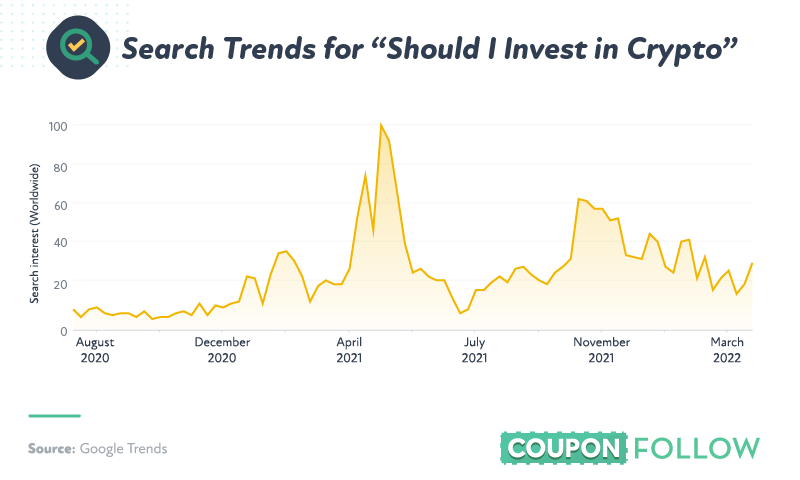 At the end of the day, most people want to get involved when there’s money to be made. This is why many scour the web in search of expert opinions to let them know whether investing in Bitcoin is a good idea. While search trends for the question, “Should I invest in crypto,” have ebbed and flowed over the past couple of years, two major spikes can be seen in May and November of 2021, with a slow but steady decline in interest ever since.

Still, many Bitcoin aficionados believe that the cryptocurrency may hit a whopping $100,000 per coin in 2022, even though the current price is only around $45,000. According to crypto experts, things like the rise of the metaverse and inflationary pressure due to COVID-19 will continue to drive interest in cryptocurrency.

At the other end of the spectrum from optimistic cryptocurrency and blockchain technology advocates, there are many people who have not yet bought any crypto at all. Let’s take a closer look at their rationale. 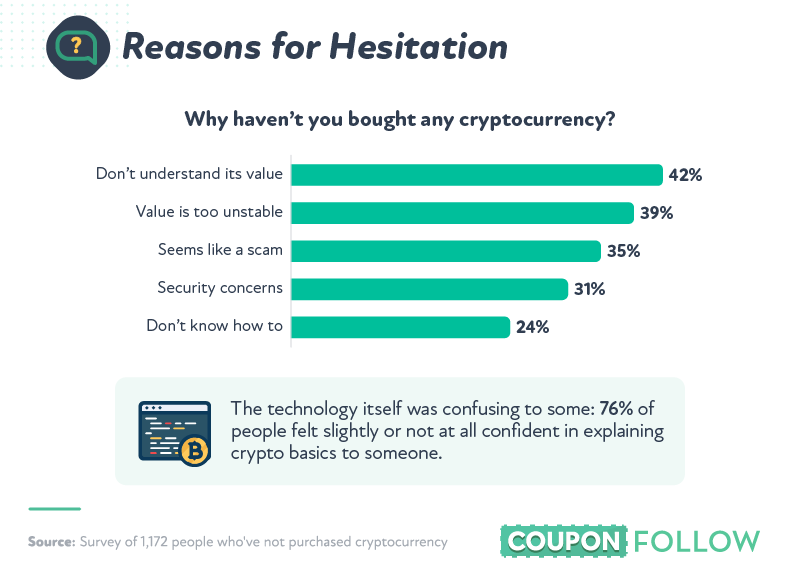 The most common reason for buyers’ hesitation was an overall lack of knowledge about what cryptocurrency is and how it works. When respondents were asked about their aversion toward purchasing cryptocurrency, 42% said it was because they didn’t understand its value. Meanwhile, 39% were put off by the massive fluctuations in value that have plagued certain cryptocurrencies. These concerns aren’t unfounded – because coins like Bitcoin are still in their infancy, their value remains highly volatile.

The third most common reason for hesitation was a concern that cryptocurrency as a whole seemed like a scam. This sentiment was most common among baby boomers, 44% of whom selected it as their primary cause for pause (significantly more than other generations). While it may be extreme to sign all cryptocurrency off as illegitimate, there certainly are scammers out there who are looking to capitalize on people’s digital wallets.

To keep your money safe, the AARP suggests avoiding cryptocurrency investment altogether if you aren’t well-versed in it. Seeing as 76% of our respondents felt unable to explain crypto basics to someone else, it seems most could benefit from gathering more information before investing their money in digital currency. Additionally, crypto owners are advised not to invest in or trade cryptocurrencies based on people they’ve only dealt with online; avoid social media posts promoting crypto giveaways; and keep their private account information in a secure place. 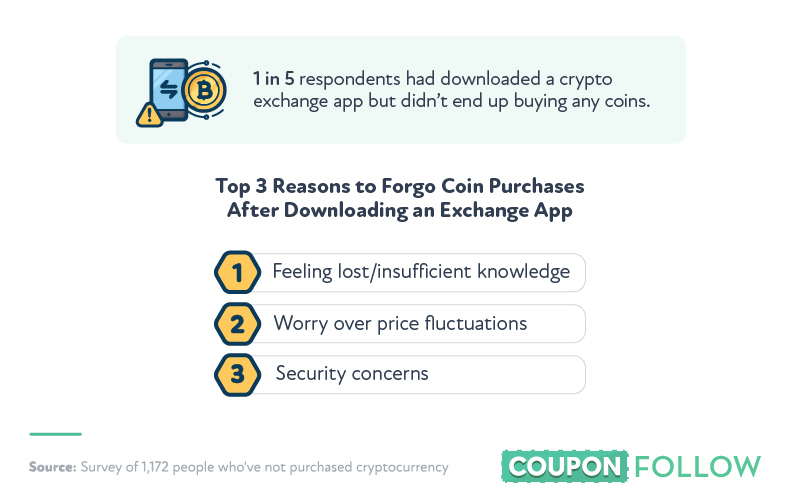 In a surprising turn, 18% of crypto skeptics have downloaded crypto exchange apps onto their phones but never ended up investing in any coins. The biggest reason for this sort of course reversal was a lack of knowledge about how to use the app or the currencies. Also, volatile prices turned a lot of people off investing in cryptocurrency after downloading an exchange app; while the third most prevalent concern was security.

Room for a Perspective Shift

People who haven’t yet bought cryptocurrency (called “nocoiners” by some crypto enthusiasts) are bound to have some concerns – why else would they be holding out on buying in? Our survey results show that despite large chunks of people with no cryptocurrency viewing digital money as a passing fad or internet scam, there’s a sizable portion that doesn’t share the same level of skepticism. In fact, more than a quarter of respondents admitted they wanted to invest in crypto but just didn’t know how to go about it. 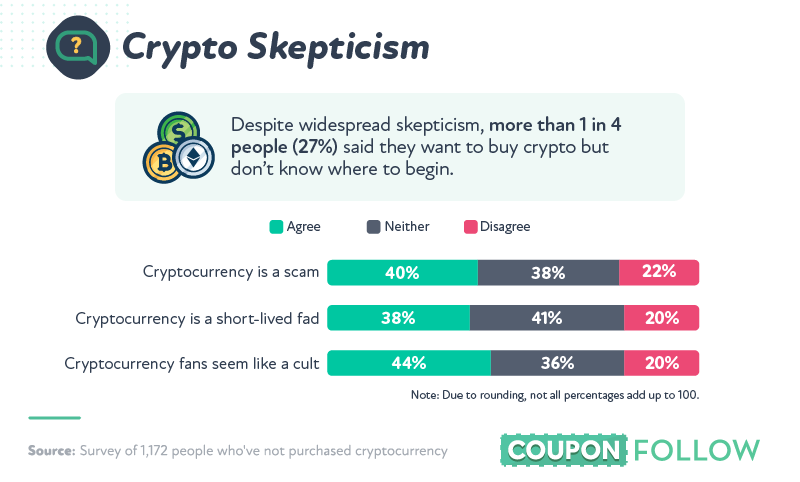 From the outside looking in, some people can have trouble understanding the fervent support cryptocurrency enjoys from many people who have bought in. In fact, 44% of respondents were turned off by what they saw as overly cultish behavior. What’s more, Gen Z and millennial skeptics were far more likely to be put off by cliquey or exclusive behavior from crypto fans (over 50% of both generations) than baby boomers and Gen Xers.

Now that the crypto craze has settled into a longer-term phenomenon and is becoming less of a foreign concept, are people willing to buy it or even just interested in learning more about it? 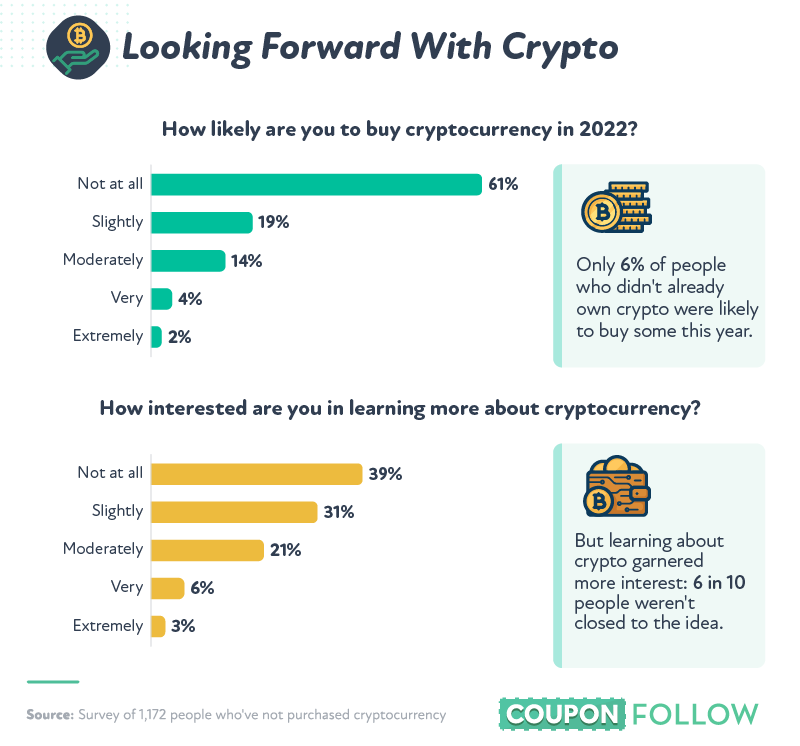 Crypto investment interest seems to have taken a hit in 2022, with 61% of respondents saying they’re not at all likely to buy in this year. Only 6% of respondents who didn’t currently own crypto said they would be very or extremely likely to do so in the near future. Too many people don’t understand how to buy it, think it’s a bad investment, feel as if they’ve already missed the boat, or simply haven’t familiarized themselves with the concept.

That being said, survey results show that interest in learning more about cryptocurrency isn’t dead. The majority of respondents were at least somewhat willing to learn more about cryptocurrency, even if they weren’t ready to spend money on it. To be precise, 6 out of 10 people had not totally discounted the idea of bettering their crypto-related knowledge. Depending on your level of expertise, different resources may be most appropriate for you to learn more. For example, beginners can check out platforms such as Coinbase Learn, Binance Academy, and CoinDesk to get the ball rolling.

A Road Map for Changing Minds

Crypto investment isn’t off the table for everyone who hasn’t already bought in. Opinions can be swayed, and minds can be changed. We asked hesitators the following: What would be most likely to convince you to purchase cryptocurrency? 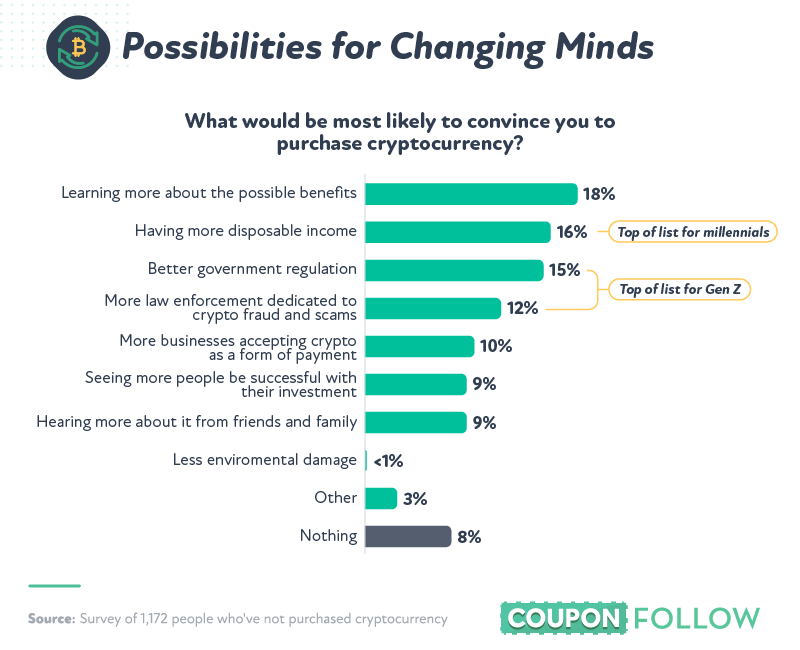 To potentially make the transition from being a crypto doubter to an investor, 18% said the most effective method would be learning more about the possible benefits of purchasing cryptocurrency. Lightning-quick transaction speeds, low transaction costs, and high accessibility might be a few reasons for people to try their hand at crypto investment.

Having more disposable income was another factor that would entice respondents to buy cryptocurrency; in fact, this was the top answer among millennials. Gen Zers were especially interested in better government regulation and dedicated law enforcement, with these factors topping the list for the youngest professional generation. 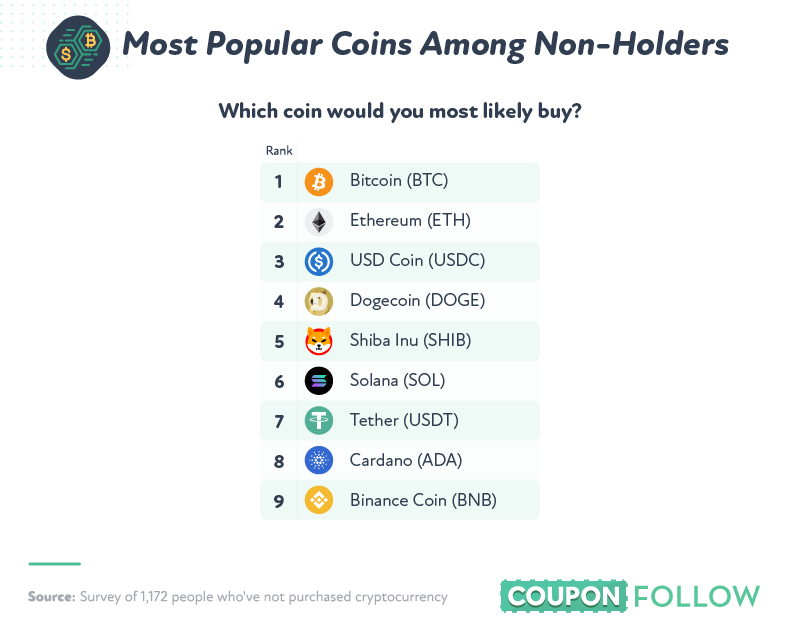 Also, non-holders were asked which coins they would be most likely to buy if they ever decided to take the crypto plunge. Bitcoin came in at number one, unsurprisingly. It has the highest price and market cap, by far, compared to other coins on the market. Coming up next was Ethereum, another well-established and popular cryptocurrency among investors. In third place was USD Coin – there are nearly 50 billion of them in circulation, and they are always redeemable on a 1-to-1 basis for U.S. dollars. Commonly referred to as USDC, this coin has gained massive notoriety and usage over the past year.

The Crypto Future Is Yet To Be Written

There are plenty of reasons why someone might be hesitant to buy Bitcoin or any other digital currency that is readily available for purchase. One of the biggest barriers is the fact that people simply don’t know enough to feel comfortable buying crypto. Some of those who understand it well see its volatility as a major deterrent and are concerned about whether their digital currency would be truly secure – whether that be from scammers or from a massive plunge in value.

Also, some believe that cryptocurrency is a fad that will end up as an afterthought soon enough. Some experts believe the exact opposite, though, so only time will truly tell how relevant Bitcoin and other coins like it will be down the line. The majority of skeptics plan to hold firm in their decision not to invest in crypto in 2022, although many have not written off learning more about it. To become more open to the idea of purchasing crypto, the most common needs were learning more about investment benefits, more disposable income, and more concrete government regulation.

As mentioned, people are always looking for the best ways to invest, save, and spend their money. While crypto is a fairly new concept, coupons have been around forever – helping people get amazing deals on the goods and services that they love. Having facilitated over $400 million in savings by sharing more than 2 million coupons with online shoppers, CouponFollow allows you to buy what you want at unbeatable prices. And who knows? Maybe you can put your newfound savings toward a cryptocurrency venture.

We surveyed 1,172 respondents over the age of 18 via SurveyMonkey. Respondents were limited to those in the United States who had not yet bought or invested in cryptocurrency. Gen Zers, millennials, Gen Xers, and baby boomers were all well-represented, with sample sizes ranging from 172 to 333 for each generation. Please note that survey data relying on self-report, as this study did, can be subject to limitations, such as recency bias, attribution errors, and survey bias.

Search queries, trends, and interest data came from the Glimpse extension for Google Trends examining keywords “Bitcoin” and “should I invest in crypto.”

Know someone who’s been on the fence about investing in cryptocurrency? They may find our data enlightening. Feel free to send these findings to whomever you like. We just ask that you do so for noncommercial purposes only and to provide a link back to this original page so our contributors can earn credit for their work.