43 Up-to-Date Shopify Statistics You Should Know in 2022

Shopify is the platform powering 29% of e-commerce websites (Source: Statista). It's behind tiny startups and big brands like Hasbro and Staples.

But just how big is Shopify? How many merchants use it? How much revenue does it earn?

Things change quickly in the e-commerce world under normal circumstances, and the pandemic has had a dramatic effect. So a lot of the Shopify stats out there are outdated.

But not the ones you're about to read.

This is a completely up-to-date list of Shopify statistics and key takeaways.

Before we dig into the 43 top Shopify statistics, here are answers to a few of the most commonly asked questions about Shopify.

Shopify is an e-commerce platform that lets individuals and businesses create, customize, and manage online stores.

How does Shopify make money?

Shopify takes a small cut from transactions on the platform. It also makes money through subscriptions and selling apps, themes, and hardware.

What percentage does Shopify take from merchants?

How many Shopify stores can I have?

You can have as many stores as you want, but you’ll have to set up a separate account for each one.

What are the most successful Shopify stores?

How can I start a Shopify store?

If these statistics and FAQs have convinced you to launch an e-commerce store, and you’re wondering how to start a Shopify business, you’re in luck — it’s easy to get started selling. You can even do all of your setup right from the Shopify website, including:

Just how popular is Shopify? To find out, we can turn to market share statistics.

Shopify has a lot of competition in the e-commerce world. WooCommerce, Wix, BigCommerce, Squarespace, and Magento are all popular platforms that businesses can use to build an e-commerce website.

But in the U.S., Shopify reigns supreme, powering 29% of websites.

Shopify may dominate the American market, but globally, it’s a different story. Shopify comes in behind Squarespace, WooCommerce, and others worldwide.

However, that may change.

Shopify recently announced the debut of Shopify Markets, a hub for merchants to manage global commerce opportunities. The company’s hope is that it will help eliminate obstacles to cross-border sales.

3. Shopify is searched more often on Google than leading competitors.

Worldwide, more people are typing “Shopify” into Google than WooCommerce, BigCommerce, or Magento — and Shopify is gaining ground. 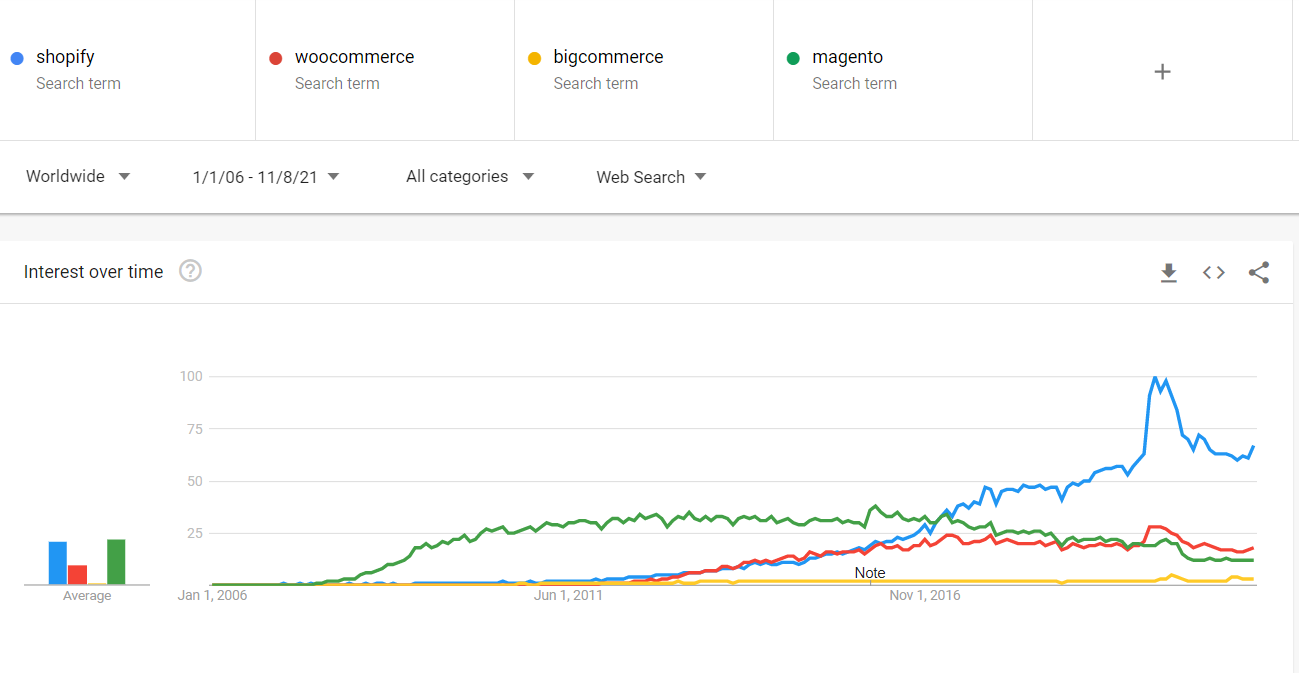 Sales and revenue metrics from the last 5 years

Shopify’s growing popularity is also paying off in annual revenue, as these statistics show.

That’s an 86% increase over 2019. And Shopify isn’t done growing, as we can see from the next statistic.

The chart below shows how Shopify’s revenue has grown since 2017. 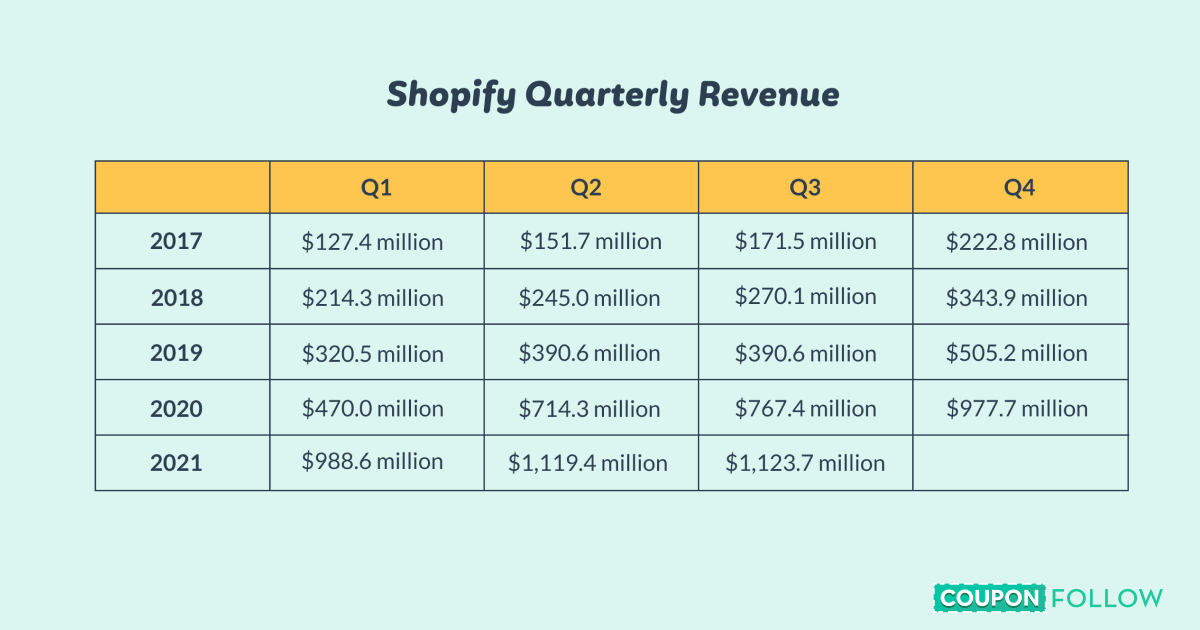 That’s up from just $136 billion in 2019. E-commerce, in general, is booming, and Shopify businesses have benefited from more shoppers going online during the pandemic.

Businesses built on Shopify had a 50% increase in online sales in 2019. In the same period, the global e-commerce market experienced a 21% increase.

More vendors opt to use Shopify every year. Who are they, and what do they sell?

Let’s look at some Shopify usage statistics to find out more.

An e-commerce platform can also be used to sell services, but most Shopify vendors are selling physical products. Only 2% sell services exclusively, while 13% sell a combination of services and goods.

The number-one type of product sold on Shopify stores is clothing. In second place is home and garden products at 19%, and jewelry and watches come in at 11%.

10. The top Shopify vendors include Ashley, Gucci, and Nike

Businesses of all sizes use Shopify. While many vendors are small (for example, small businesses on Shopify made up the majority of international exports in 2020), some big brands also rely on Shopify (Source: Deloitte). 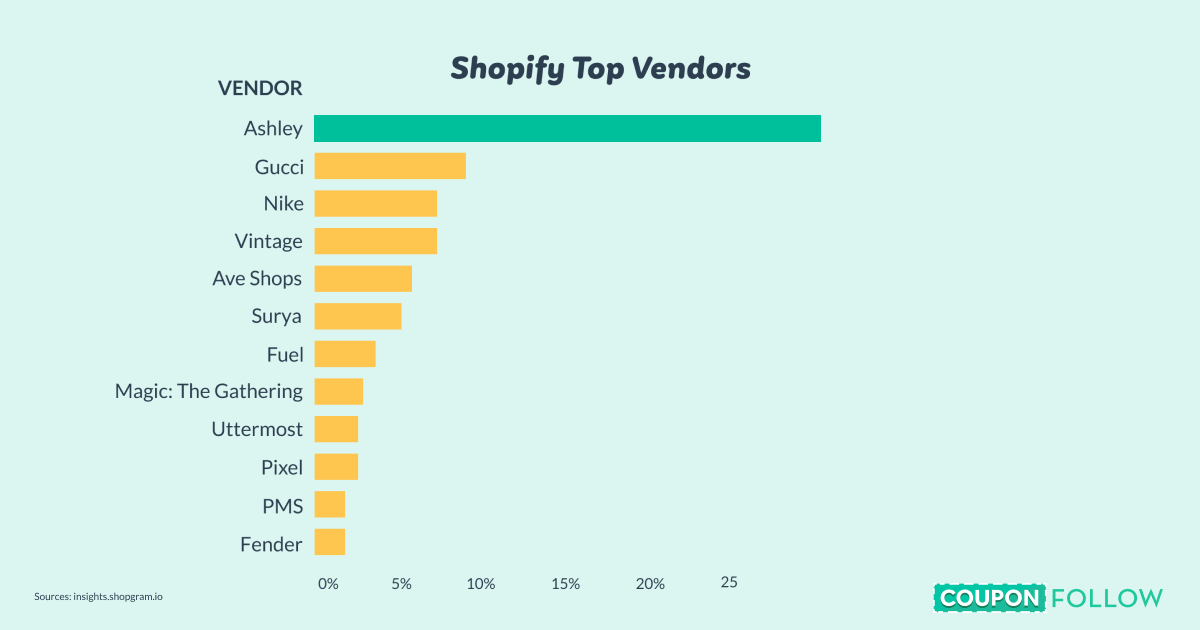 In a year when millions of jobs were lost, Shopify stores provided full-time employment to 3.6 million people.

Here’s another way to put it: 1 in every 1,000 employed adults works for a Shopify vendor (Source: Shopify News).

We’ve seen statistics about the Shopify market share and revenue growth already, so it probably won’t surprise you to know that Shopify stock is also on the rise.

(Source: The Globe and Mail)

The company had previously said it hoped to raise $100 million. The stock was initially valued at $17 (Source: The Globe and Mail).

Next comes Jennison Associates LLC at 4.09% and Capital Research & Management at 3.88%.

We jumped right into looking at Shopify statistics, but let’s step back and look at the company and its history.

As a programmer and avid snowboarder, Tobias Lütke had the idea to launch an online snowboard shop. But it wasn’t easy — the software available in 2004 was expensive and clunky.

So he created his own.

At first, his creation was just meant to power his e-commerce business called Snowdevil. But other vendors were interested in the software he’d made. Lütke and the other Snowdevil co-founders made the decision to pivot from snowboards to software, and Shopify was born. 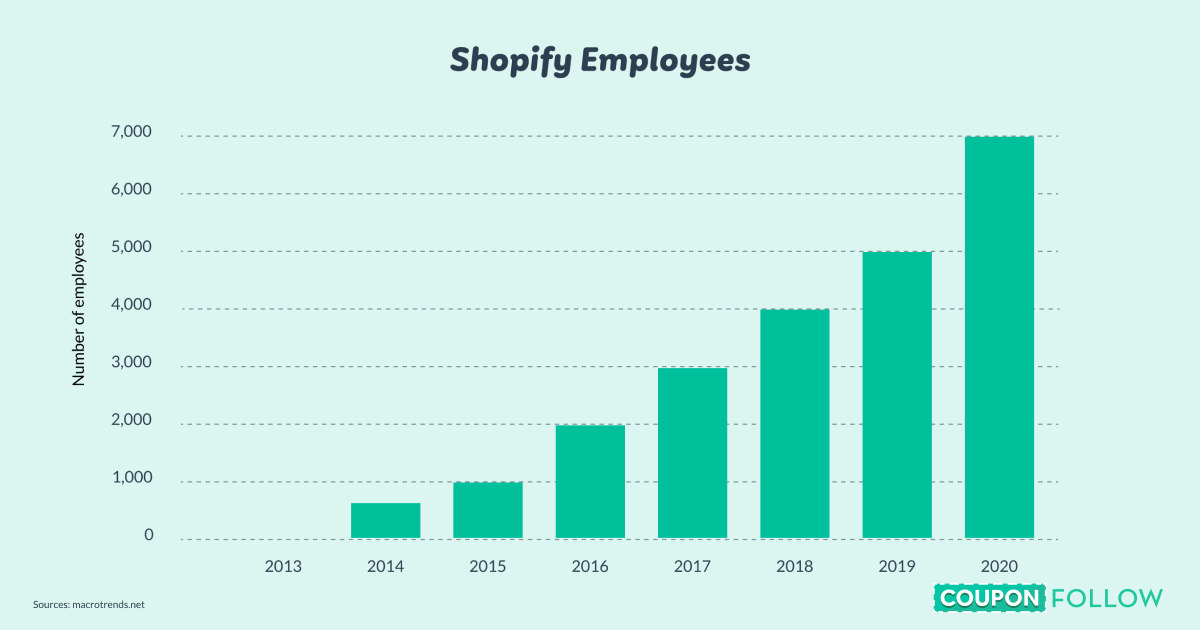 19. Since 2016, Shopify has provided $2 billion in funding to entrepreneurs

Shopify Capital is a program that lets Shopify merchants with an established record of sales get loans and cash advances. Machine learning models mean that eligible Shopify users can automatically receive Shopify Capital offers without having to apply.

That’s higher than popular competitors like BigCommerce, WooCommerce, and Wix. It gets especially high ratings for ease of use and customer support.

We already mentioned that Shopify’s market share is larger in the U.S. than anywhere else. These statistics look at how Shopify is doing in the U.S. and across the world.

The U.S. also has the most business activity from Shopify merchants, followed by the U.K. and Canada (Source: Deloitte).

E-commerce increasingly involves cross-border sales. Shopify is aiming to make international commerce even simpler for its vendors with Shopify Markets. Shopify Markets is a tool that will let merchants easily sell to customers from around the world from a single Shopify store.

It’s currently in the early access phase and will roll out to all merchants soon.

23. As of July 2021, over 27% of all traffic to Shopify stores comes from international buyers

We can expect to see ongoing growth in Shopify’s cross-border sales in the future.

24. Shopify shoppers in the U.S. buy nearly twice as much on average as any other country.

U.S. shoppers load up their carts with an average of six items. No other country averages more than three.

25. Consumers in Japan spend the most on average per transaction at $141.72

Japanese shoppers are the biggest spenders in Shopify stores, spending $141.72 per transaction. To compare, U.S. shoppers spend an average of $81.26.

Shops in Japan are also more likely than anywhere else to have repeat buyers. 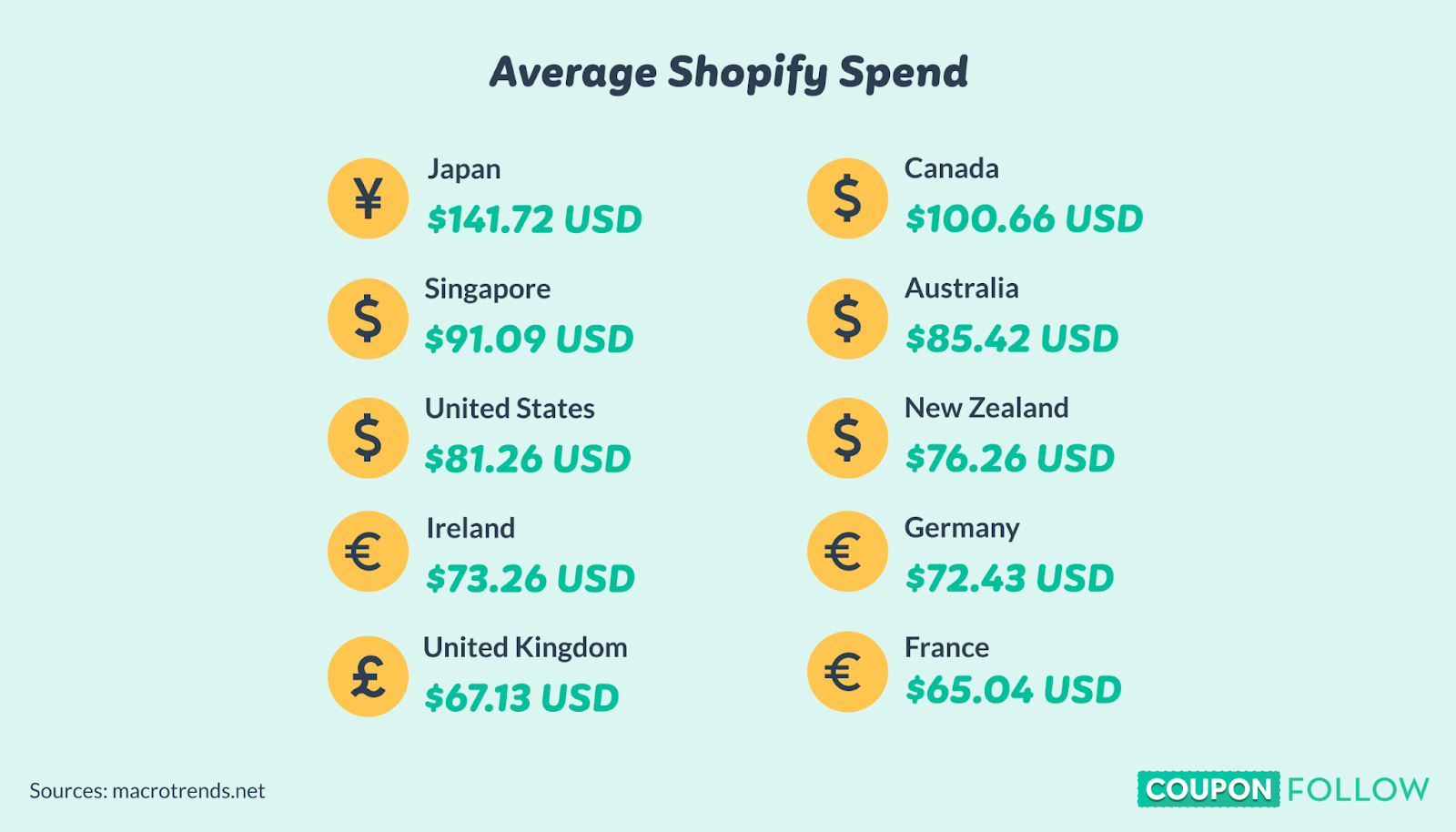 Slightly over half of internet traffic comes from mobile devices (Source: Statista). These statistics show how many customers are viewing and buying from Shopify stores on mobile.

26. 81% of Shopify traffic comes from mobile

Going beyond the statistic for overall internet traffic, a strong majority of Shopify store visitors are on a mobile device.

If you’re a Shopify store owner, you should be prepared for most of your sales to come from mobile users.

The global pandemic has been hard on many business owners, but e-commerce only grew as shoppers turned to online stores.

Some brick-and-mortar businesses were even able to survive by using an e-commerce platform like Shopify. Shopify took measures to encourage this and make it easy for new vendors to come on board.

Shopify also made gift cards available to all merchants on all plans. For those using Shopify POS for brick-and-mortar stores, Shopify made in-store and curbside pickup possible.

In March 2020, Shopify removed thousands of vendors from the platform for charging unfair prices or making false claims about COVID-19.

In just over a month, Shopify experienced staggering growth in users.

Many were small retailers, but some were big brands turning to e-commerce in the pandemic. For example, Heinz created an online Shopify Plus store in April 2020 (Source: Shopify).

The pandemic changed shopping habits around the world. Many customers visited a Shopify online shop for the first time ever. 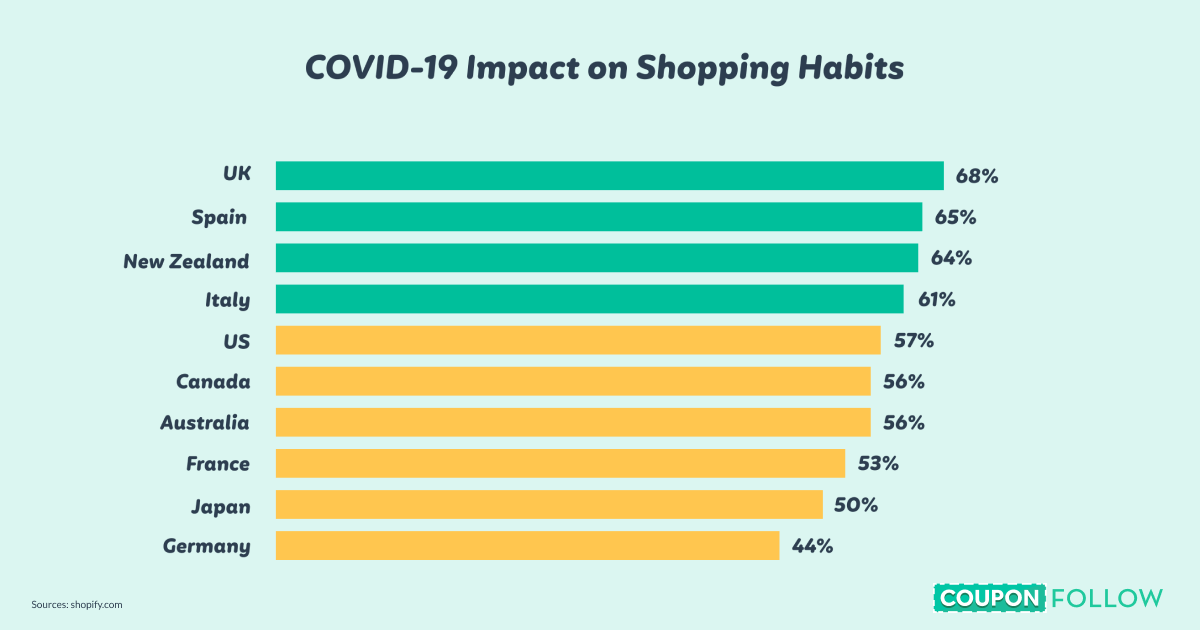 Third-party tools like e-commerce platforms can be a security vulnerability for users. Unfortunately, Shopify is no exception.

We don’t have a list of every online business that was affected, but the breach involved at least a few big names like Kylie Cosmetics and Thrive Causemetics.

One affected vendor claimed that more than 4,900 customer records were accessed.

Protect yourself from cybercrime with our guide.

Let’s break down a quick statistic about Shopify’s environmental impact.

Starting in 2019, Shopify also began sourcing renewable power for heating, cooling, and powering its own buildings.

Shopify is most heavily associated with online retailers, but it can be used in person as well. Shopify POS lets Shopify users unify their online and in-store sales.

34. Online storefronts represent over 80% of sales 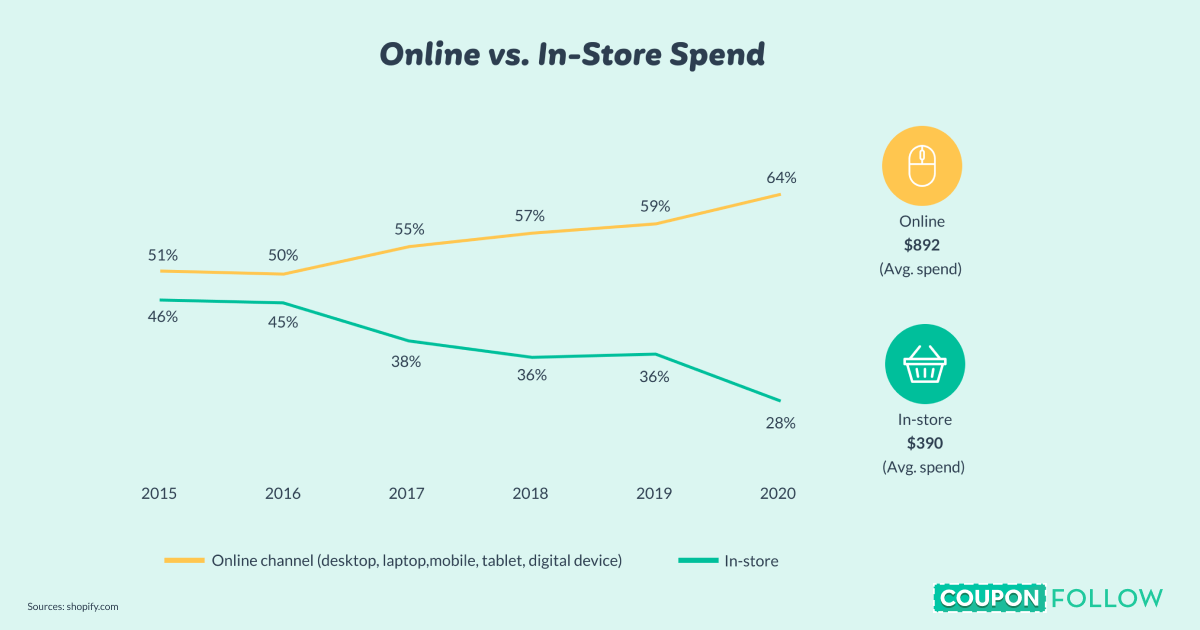 Customers not only prefer to shop online — they tend to spend a little more in an online store than a brick-and-mortar one.

Black Friday used to be about a massive rush for discounted items in brick-and-mortar stores, but America’s biggest shopping day has evolved.

As the platform behind 29% of e-commerce websites, Shopify is a major player on Black Friday.

The percentage of online Black Friday and Cyber Monday purchases was already growing. Add in a pandemic, and 2020 saw 75% year-over-year growth in Shopify sales. 2021 broke even that record with an additional 21% growth.

37. At peak, Shopify merchants generated sales of $3.1 million per minute during Black Friday

Where do Shopify buyers come from? Do they find Shopify stores by searching for a product on Google or by responding to a social media post?

These statistics answer those questions.

Shopify analyzed its Black Friday traffic to find that email campaigns have a higher conversion rate than any other referral source. Search comes in at 3.04%, 2.93% of conversions are from direct traffic, and 1.81% come from social media. 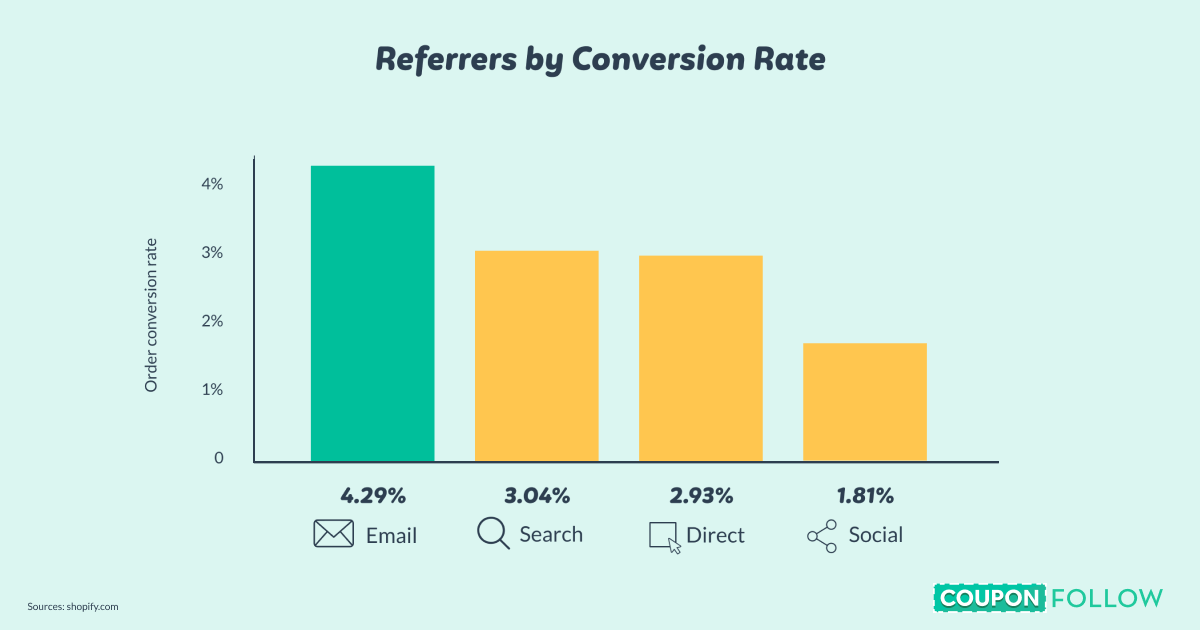 39. 3D models in AR can increase Shopify conversion rates by up to 250%

Augmented reality (AR) is a technology that superimposes an image onto a user's view of the real world. Shopify offers AR so shoppers can get a better sense of the true size and appearance of products.

According to Shopify, the average conversion rate with Shopify AR is 250% higher than without it.

Shopify Plus is a version of Shopify that offers more features, better customization, and increased support options. It’s a bit expensive for the average small business and is typically used by larger enterprises.

Shopify apps can be added to a store to add features and functionality. Shopify themes are templates that give a store a certain look.

42. There are over 7,000 apps available in the Shopify app store

The most installed apps in the Shopify store are:

43. There are 70+ themes in the Shopify theme store

The most popular themes in the store are:

The story these statistics tell is one of a leading e-commerce platform experiencing incredible growth. In recent years, Shopify has increased its revenue, number of vendors, stock price, and more.

This upward trend was already happening before COVID-19, but the pandemic has changed consumer behavior and created new opportunities for online retailers, and that accelerated Shopify’s growth.

While Shopify has primarily dominated the American market, it’s becoming more international, which we can expect will lead to the continued expansion of the business.

If you’re interested in being a part of the Shopify success story, check out our Shopify coupons and promo codes.

You can’t discuss e-commerce without talking about Amazon. Check out our 50+ Amazon statistics.